Most verily fellow Asgardians, another Thorsday is upon us! Thor has always been known for his very formal way of speaking, with a proud accent that calls to mind Shakespearean actors delivering dialogue, rather than an ancient warrior in the midst of battle. Regardless, the god of thunder manages to deliver humor, intensity, and occasionally sass in his quotable quips.

Today we have a list of Thor’s most iconic movie lines; quotes that instantly bring the thunder to any conversation. Make every day Thorsday by tossing a few of these mighty sayings into your regular vocabulary!

One of Thor’s most well-known lines from the original movie involves him smashing a mug in a New Mexico diner while asking for a refill of his coffee. He quickly learns that this is not acceptable behavior on Midgard, and apologizes. In a deleted scene, Thor even returns to the diner to replace the mug he shattered.

Despite learning the error of his ways, this line has persisted in representing his bold warrior spirit and comical misunderstanding of human culture. Next time you want another vanilla latte from the coffee shop, try asking for it like an Asgardian. Don’t be surprised if they ask you to clean up your mess, though.

Tired of Loki’s tricks and tormenting the newly formed Avengers team, Thor takes him from the quinjet to have a talk, brother to brother. The god of thunder has no time for excuses, urging the trickster to return home before any further destruction is caused.

He means business, and isn’t afraid to let Loki know as he knocks him to the dirt before the Avengers return to interrupt their conversation. If someone is acting too carefree while you’re trying to be serious, delivering this line in your best thundering voice should let them know it’s time to be serious. Or that you just really don’t want to play Monopoly.

Under the influence of Loki’s staff, the Avengers begin to argue aboard the helicarrier. This quickly devolves into them taking shots at one another as they try to pass off blame for the recent string of escalating events. Thor’s contribution to the argument is to remark on how “petty and tiny” all the mortal heroes are, smirking as he says so.

Compared to Chris Hemsworth? Yeah, everyone else looks pretty tiny. If you try this one out on a group of squabbling people, it works best if you’re on the taller side. Otherwise, it sounds silly.

Yes, Thor, we get it! You’re a big guy. Here, fighting in the rain against all of Coulson’s best security guards, the thunder god takes another opportunity to remind those around him of his strength and size. Covered in mud and rainwater he takes the burly guards down one by one.

Next time you’re in a fight, instead of backing down peacefully, be sure to let your enemy know that they are hardly the biggest, baddest guy you’ve fought. I’m sure that’ll make them scared and definitely not angrier at you for insulting them.

Thor never seems to be in a gaming mood when it comes to Loki. Freeing his brother from prison for a secret, highly treasonous mission to Svartalfheim, the thunder god lays out the terms for his trickster brother- no jokes, jests, or lies, or else it’s curtains (or mother’s drapes?) for Loki. Sounds fair enough.

If you need to make a deal with someone and need absolute assurance they won’t pull a fast one on you, take a page out of Thor’s book and threaten them with death. It makes your communication clear about what you want, and probably won’t dissuade someone from giving you the help you need. Just be prepared for the follow-through! (I’m kidding, please don’t do this. It’s a bit extreme, even for Thor.)

Brotherly love at its finest. After defending Loki from the criticisms of the Avengers, he sternly reminds them that the god of mischief is still his beloved sibling, even though he’s been causing trouble. After Black Widow reminds him of the tally of total damage, Thor quickly adds that Loki is adopted- so destruction and chaos definitely don’t come from Odin’s side of the family.

Next time someone is trying to blame you for the actions of another, especially a family member, Thor’s quick wit should help clear your name and relation to the culprit- just be prepared to explain in the case that someone has some questions about their frost giant heritage. 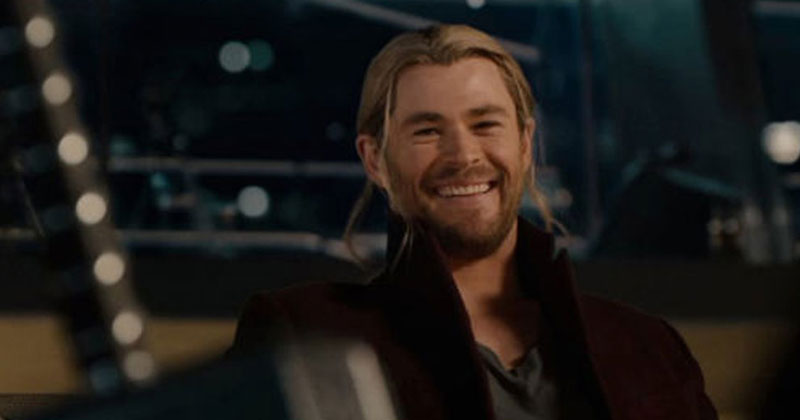 Thor once again shows his diplomatic abilities in resolving a dispute at the Stark Tower party in Age of Ultron. The argument? Whether Pepper Potts or Jane Foster is better. Of course, Tony and Thor are both biased, and personally I think they should have agreed that both of the women are equally fantastic.

Still, Thor rounds out the dispute with a quick, “Jane’s better”, as he smirks to himself, putting his eloquence to work once more. I wouldn’t recommend using this one in a daily context, unless you are very specifically arguing about your significant other being awesome. And if their name isn’t Jane, this one might get awkward!

Being mighty solves a lot of problems for Thor, including the problem of mind control- right? Just before Scarlet Witch hexes him, the thunder god declares that his strength can protect him from such trickery. And then, of course, he walks right into a nightmare caused by the woman’s magic. The vision he sees is weird and frightening, but Thor knows his own strength and eventually overcomes her spell.

Sometimes we all need a little reminding of our own mightiness. Try this one out next time someone needs help opening a pickle jar, or you need to do some heavy lifting. Instant confidence boost guaranteed!

Now you should be adequately prepared to bring the thunder every day! Practice your biggest booming voice and try to sneak some of these classic Thor references into everyday situations. You’ll sound like the thundering Avenger in no time!

Until next Thorsday, practicing Asgardians!

Thor's 7 mightiest weapons and tools of the trade

Our Spoiler-Free Review of Rogue One