It seems like just about everyone in the Marvel Universe has superpowers. Left and right, there are constantly new mutants, new heroes, and new villains, all with unbelievable powers. Without their superpowers, what are they? Well in some cases, they’re amazing martial artists.

Training the mind and body to peak physical condition is a superpower in its own right- today, we’re taking a look at ten of Marvel’s most disciplined, deadly martial artists! 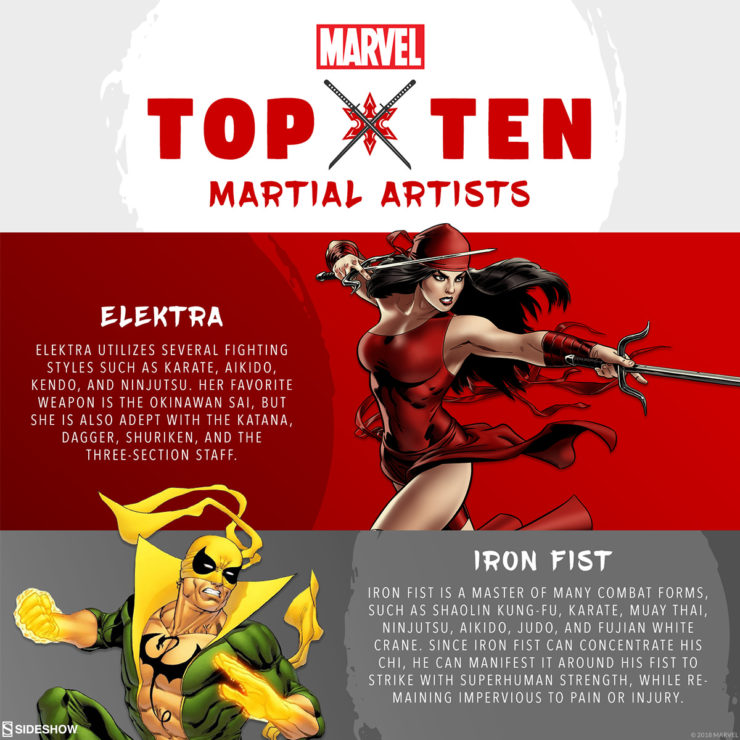 Elektra Natchios had a difficult childhood—starting with kidnapping and the murdering of her mother. Hugo, scared for his daughter, hired a sensei to teach her a variety of different martial arts. As she got older, she traveled to China, Siam, and Japan to learn more fighting styles. She’s won trophies in aikido, kendo, and karate. However, she primarily uses Ninjutsu.

She was trained by Stick, the same person who taught Daredevil. And even without using her signature Okinawan sai, she’s a great fighter. She has learned the ability to locate specific pressure points on the body and incapacitate or even completely paralyze someone. She has the upper hand in any fight at night, but even during the day, she can be completely unseen in the shadows.

Danny Rand is the Immortal Iron Fist, a title and power he received after literally plunging his fists directly into the heart of a legendary dragon named Shou-Lao the Undying. That’s right, even before he was imbued with the powers of the Iron Fist, he was a skilled fighter who single-handedly defeated a dragon.

Danny was trained in K’un-L’un, a mystical city/parallel dimensional realm of reality that only intersects with Earth every 10 years. He learned martial arts from Lei Kung the Thunderer, and became one of his most prized pupils. At the age of 16, he earned the Crown of Fu-Hsi, king of the vipers. Danny learned to overcome pain by thrusting his hands into hot sand, gravel, and rock, making his fists and his will stronger. 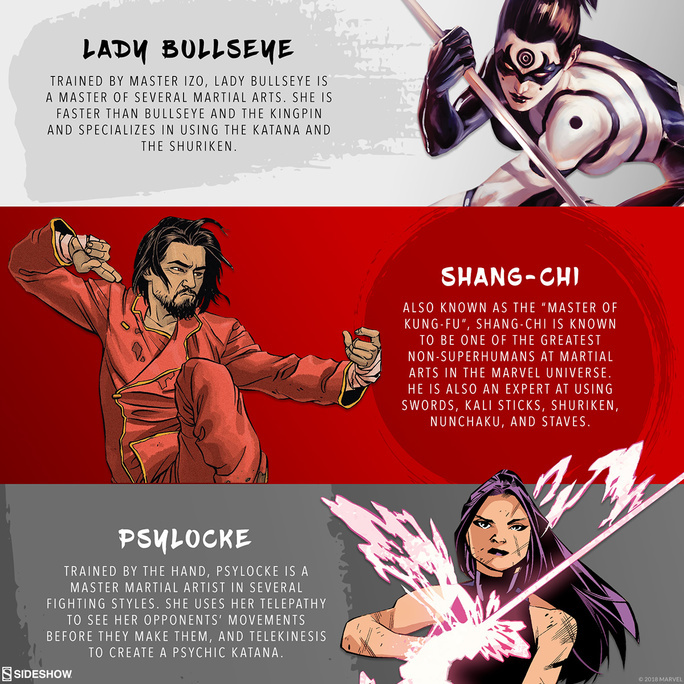 Lady Bullseye was sold into slavery at a young age, but when her captors were killed effortlessly by Bullseye, she became inspired. She followed in his footsteps, learning expert precision and hand to hand combat. While she often works for the criminal organization called The Hand, she does not like their rituals and traditions, and often catches her enemies off guard.

Lady Bullseye was trained by Master Izo, a trusted ally of Daredevil. She fights with a katana and shuriken. Lady Bullseye and Daredevil are constantly crossing paths, since at times they both wanted to be the leader of The Hand. Daredevil is impressed by her, and even noted that she can limit her scent and heart rate. She’s even defeated Black Widow in combat.

Shang Chi is the son of the supervillain Fu Manchu, a bloodthirsty mastermind determined to take over the world. From the moment he was born, Shang Chi was trained in martial arts by his father, and any other martial arts instructors his father could find. He usually fights empty handed, only using bracers on his wrist to deflect blows. He is quick enough to even deflect bullets from machine guns and sniper rifles.

He once believed that his father was a good man and fought for his cause. However, when Shang-Chi learned how truly evil Fu Manchu was, he turned his life around for good. Black Panther even said that Shang Chi is a better fighter than Danny Rand himself, despite having no superhuman abilities (at first). But if all of that wasn’t enough, he recently gained the power to create unlimited clones of himself, who are all equally skilled in martial arts.

Betsy Braddock, or Psylocke, has gone through many iterations through the years and had many different roles in the Marvel Universe. She’s donned different costumes, inhabited different bodies, and had a wide array of powers. She’s most commonly known for her weapons made from telekinetic psychic energy, such as katanas, crossbows, bow and arrows, flails, or even claws.

Her martial arts skills are often overlooked, though. She is a master of martial arts, primarily in skills and techniques associated with ninjas. She uses Ninjutsu, Taijutsu, and Kenpo in battle. She has worked and trained under The Hand, but easily surpassed even their best fighters. She has defeated even ninja grandmasters in hand to hand combat. Since she is a telepath, she’s even able to predict some of her opponent’s moves before they happen. She can also use her telekinesis to augment her strength and speed, making her kicks harder and punches faster. She’s a psionic force to be reckoned with. 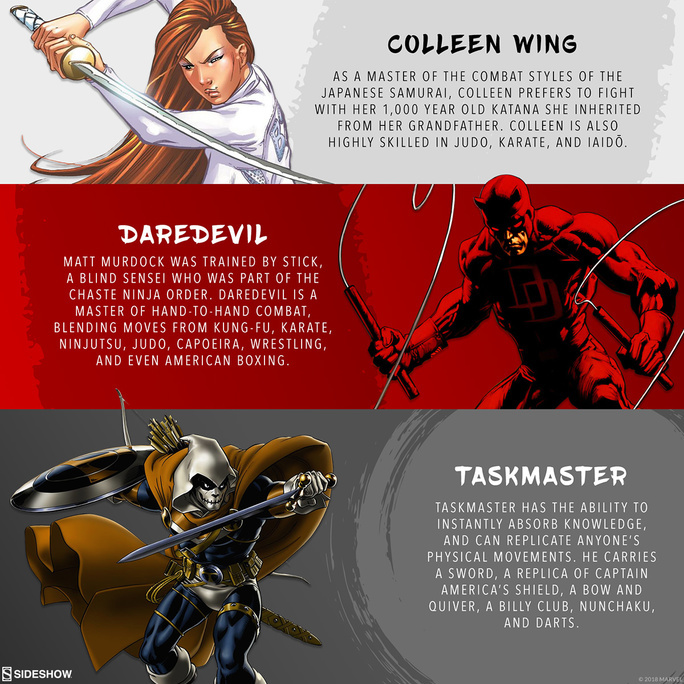 Colleen Wing has absolutely no superpowers, but still can overpower even the best of fighters in martial arts. She grew up in the mountains of northern Honshu in Japan and was raised by her grandfather, Kenji Ozawa. She is often the love interest of Danny Rand, the Iron Fist. In the Civil War comic arc, she chose to work with Iron Man, and teamed up with Misty Knight and Shang-Chi.

Her grandfather Kenji Ozawa taught her and also gifted her a one-thousand-year-old katana that had been passed down through her family. She is a skilled martial artist, and after merging consciousnesses with the Iron Fist, she learned to control and focus her chi. Using this focus, she can strike quickly, and even defeat people with superpowers like Angar the Screamer.

Matt Murdock grew up around fights. His father, Jack Murdock, was a professional boxer. Since he had to fight every day just to make a living, Jack Murdock knew that he never wanted his son to have to fight. He wanted him to study hard and make something of himself. But when Jack was killed by a group of gangsters for not throwing a boxing match, Matt Murdock wanted revenge and eventually became the Devil of Hell’s Kitchen.

Even though Daredevil is blind, his extrasensory perceptions makes him a worthy adversary. His mentor, Stick, taught him how to harness his abilities, and he uses his senses to his advantage in a fight. Using his hyper-sensitive sense of hearing and touch, he can follow the vibrations of the air and hit a target with perfect precision.

Anthony “Tony” Master became the Taskmaster when he injected himself with a recreated version of the Super Soldier Serum. It affected him in a unique way and gave him the gift of “photographic reflexes”. Technically, he has no superpowers. He has the ability to mimic the movement, voices, actions, and weapon use of anyone that he sees. This makes him able to predict almost everything that his opponents will do, even before they do it. He’s so talented that he even started a school called the Taskmaster’s Academy so that he could train criminals how to act against specific heroes.

While he usually does not need training since he can imitate any person’s fighting style, Taskmaster has been trained by S.H.I.E.L.D. Since he can imitate superhumans, he can respond as quickly as one. He can imitate other heroes so well that he even carries around his own shield like Captain America. However, he can not imitate their actual powers. Of all the opponents he’s had, he’s never been able to predict what Deadpool would do next, since Deadpool is truly unpredictable. 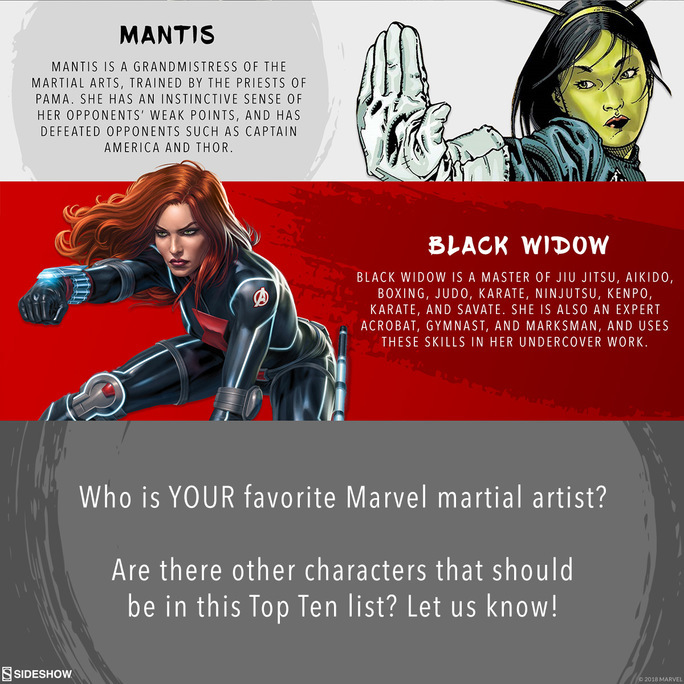 Mantis is known for her ability to use telepathy and empathy in order to communicate with any entity, and even make Thanos sleep in Avengers: Infinity War. She is able to completely control her nervous system, and can will her body to heal faster. Not only that, but she’s been seen controlling plants, and even once made Groot spontaneously catch fire.

While she has an array of powers, it seems that her most useful power is how well she can know the people around her. She is a master martial artist, that uses her empathy to know an opponent’s weakness. She is so skilled with locating pressure points that she was even able to stun Thor, God of Thunder, even though she has no superhuman strength at all.

Natalia or Natasha Romanova was raised in the U.S.S.R. in the “Black Widow Ops” Program, in the secret Red Room facility. She was technologically and genetically enhanced, to give her a long life and teach her extraordinary skills. Even though she has no explicit superpowers, she’s durable enough to withstand punches from supers like Imus Champion and Black Dwarf.

Black Widow has held her own against Wolverine, Winter Soldier, Elektra, and Punisher. What makes her such a brilliant fighter is the way she thinks. She has an unbreakable will, and she has the ability to out-strategize her opponent. She’s such a brilliant tactician that she’s even led the Avengers and S.H.I.E.L.D.

So, did we get all of your favorites on our list? Do you think these Marvel martial artists are really the top ten? Let your Geek Sideshow and let us know your thoughts in the comments!

If you’re looking for more Marvel collectibles or Avengers figures, look no further- Be sure to browse Sideshow’s full offering of Marvel superhero figure, prop replicas, statues, and more!