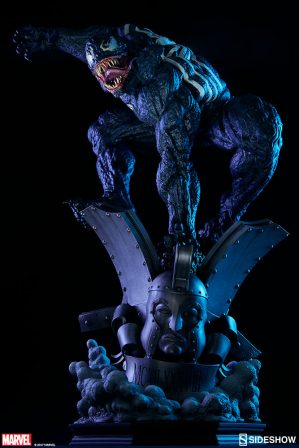 There have been a few rumors and some unconfirmed speculation over the last 12 months, but now reports have surfaced of a big screen Venom movie…with a 2018 release date! For Marvel fans, this is a surprising, and exciting piece of superhero news, and for many Venom fans (us included), the thought of an Eddie Brock solo movie is just mind-blowing!

Exhibitor Relations unveiled news of the 2018 release date via their Twitter page, and announced (via Sony) that Scott Rosenberg & Jeff Pinkner (who wrote Jumanji) have taken up script writing duties on this secretive symbiote story.

Currently there is no official confirmation of Venom’s place in the existing continuity within Marvel Cinematic Universe or with current Spider-Man lore, but we can’t wait to find out more!

Check out Sideshow’s Spider-Man rogues gallery, including Venom, Carnage, and Anti-Venom via sideshow.com.