“I’ll take a good fight any day over all this hidin’ and freezin’!”

On the run and with a price on his head, the intergalactic smuggler Han Solo joins the Rebel Alliance at their remote secret location on Hoth, Echo Base. Dressed for the planet’s notorious sub-zero climate, Solo is fitted in an authentically replicated quilted parka complete with rank insignia and fur-trimmed hood, in your choice of brown or blue (the latter available exclusively from SideshowCollectibles.com).

The Brown vs Blue Controversy

There’s an interesting history, of course, and longstanding Star Wars debate behind Han Solo’s wardrobe in those opening scenes on Hoth – was the jacket he wore blue, or brown? Although every piece of evidence has been pulled from the archives, from screen captures to the original costume worn by Harrison Ford, to this day ‘brown’ and ‘blue’ remain fighting words in the galaxy far, far away. 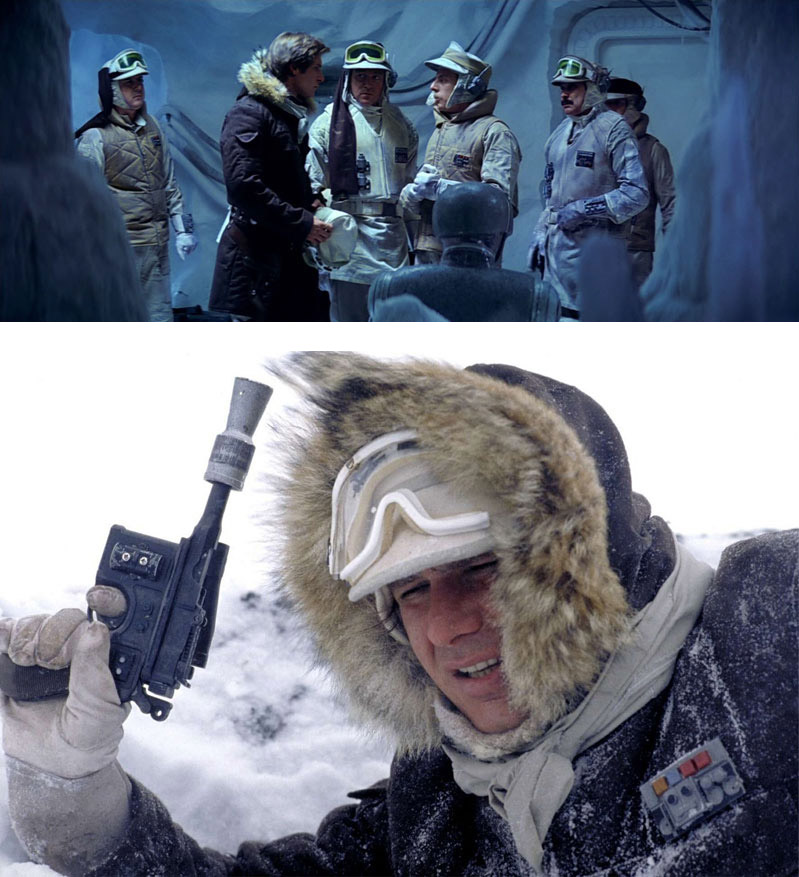 It’s not hard to see why the question arose in the first place. Turn on The Empire Strikes Back and you’ll see it can be tough to tell, as the color appears to change from one scene to the next due to lighting, frost and other conditions.

Despite reference photos of the brown coat, many fans – especially collectors – prefer blue because it has been etched into their memories since childhood, attributing their preference to original 1980 Kenner Han Solo action figure.

But in early 2003, when Hasbro debuted a new Hoth Han Solo figure in navy blue, they were faced with a whirlwind of growing controversy about the accuracy of the color. With a clever campaign, Hasbro later re-released Han in brown that same year, announcing that in the interest of authenticity (and world peace), both sides of the argument would finally have a version of Han Solo to match their standpoint. Sideshow is proud to follow suit (so to speak), and pay our homage to fans of both camps – and those who enjoy the history behind each!

In addition to the parka of your choice, two scarves, a cap, and goggles frame Han’s lifelike portrait, handcrafted and painted to perfectly capture actor Harrison Ford in the role that made him a star. Or, with the Sideshow Exclusive version you’ll be able to swap in the included alternative portrait without headgear to display Han as he appears inside the base (below and right).

Hiding and freezing on the wretched ice cube doesn’t sit well with the smuggler’s disposition, but when Rebel Commander Luke Skywalker goes missing during a routine patrol, Solo has no choice but to leap onto the back of an ill-fated tauntaun and go out after him.

Fully equipped with a blaster pistol, macrobinoculars, droid caller, and portable life scanner, he’s willing to risk everything on a rescue mission to find his friend and save the day.

The regular Captain Han Solo – Hoth Sixth Scale Figure with brown parka, and the Sideshow Exclusive version with brown or blue parka are each priced at $199.99, with flexible payment plans available for as low as $66.66/month.