Up to 50% OFF favorites from the 🎦 Big Screen!
https://www.sideshow.com/collectibles/all-of-me-is-illustrated-deluxe-edition-rosettabooks-905426
1 / 26 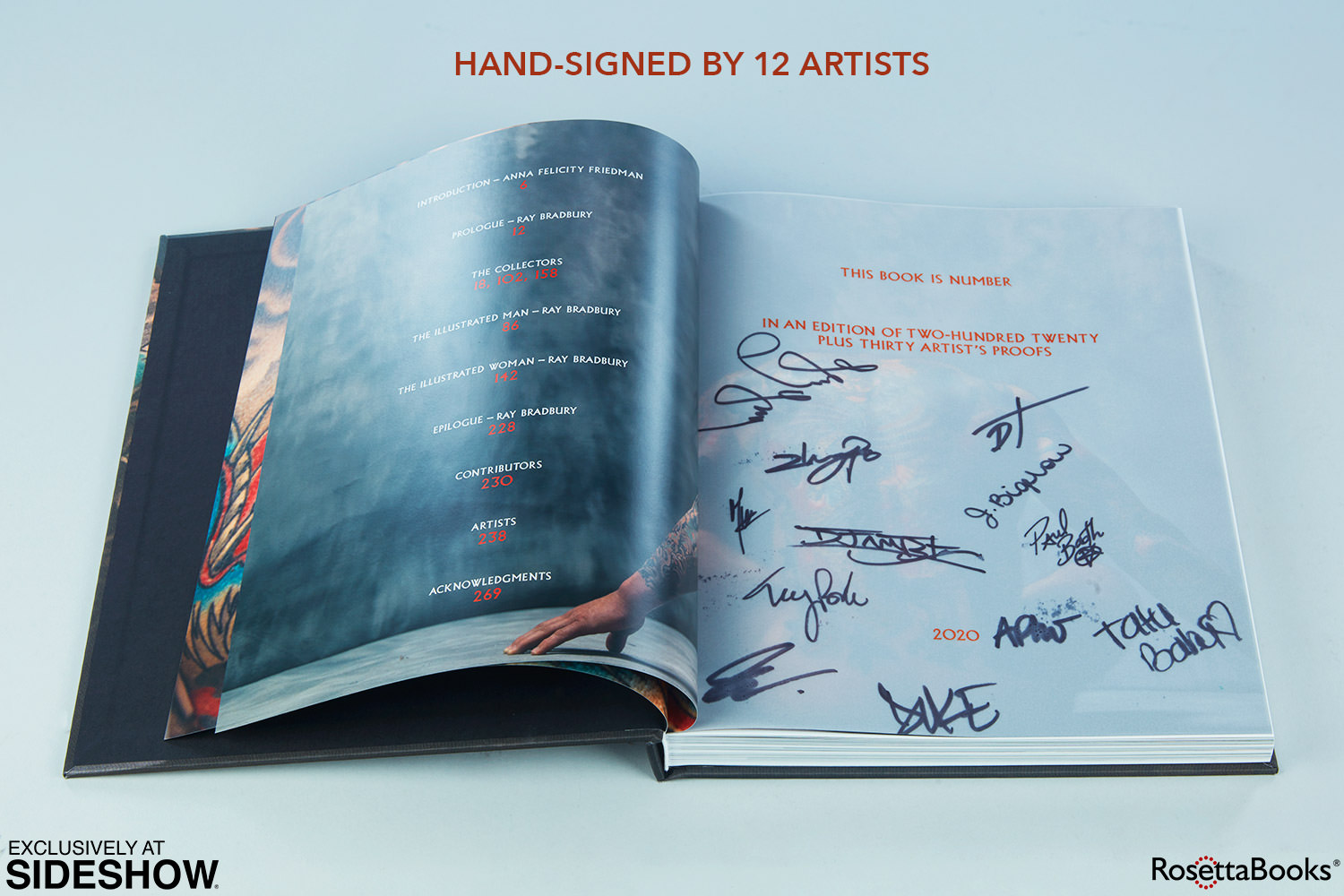 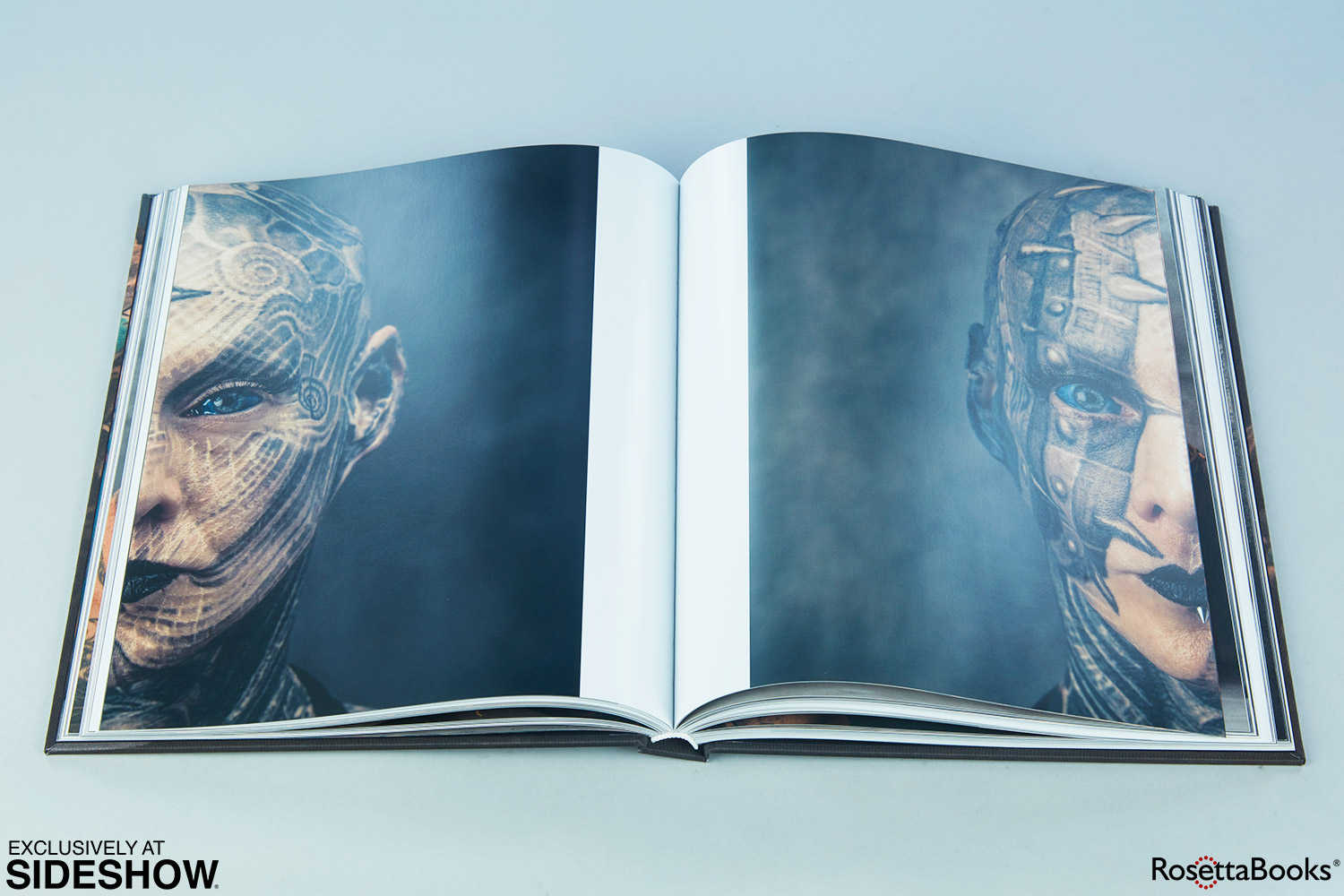 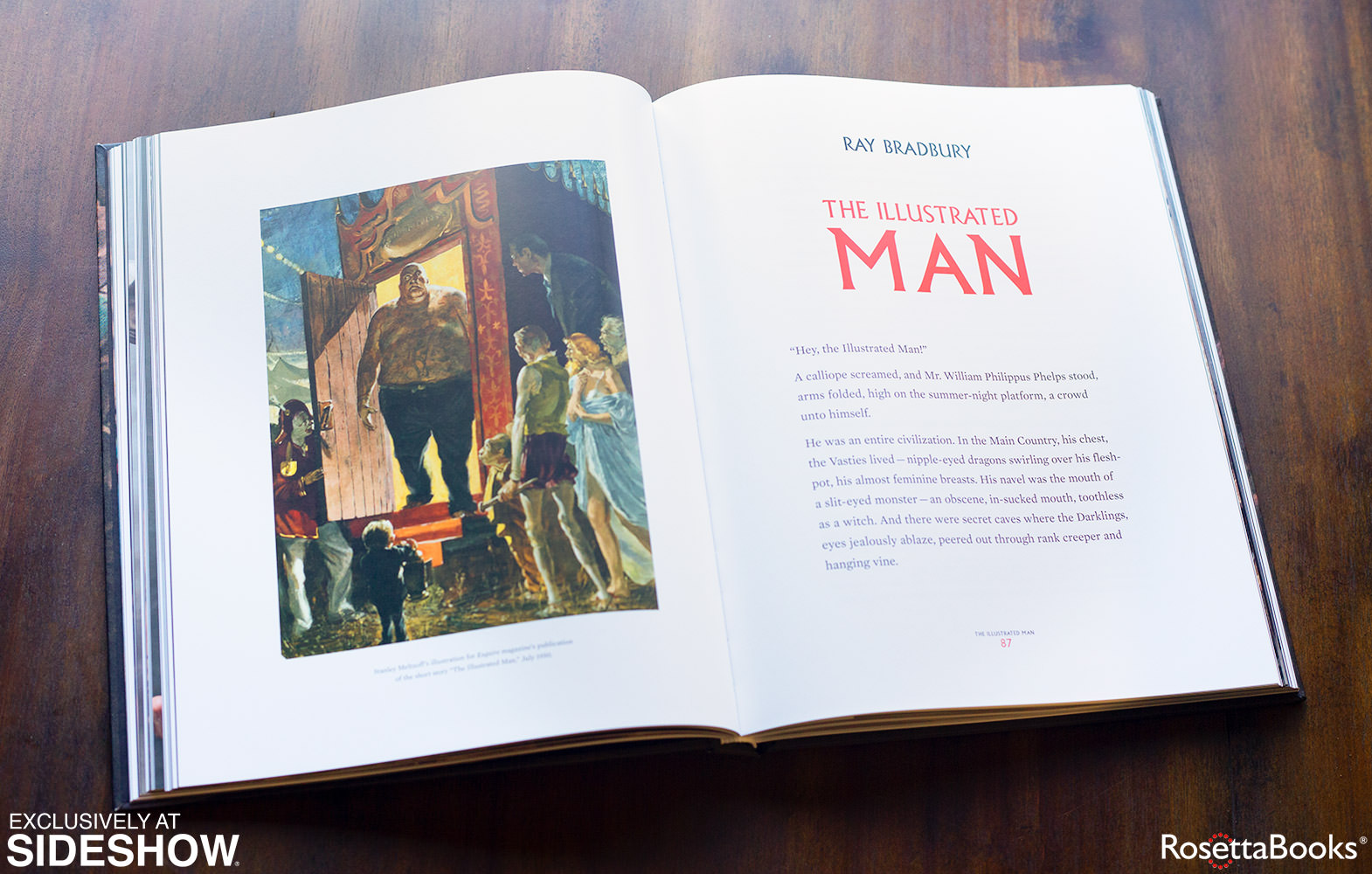 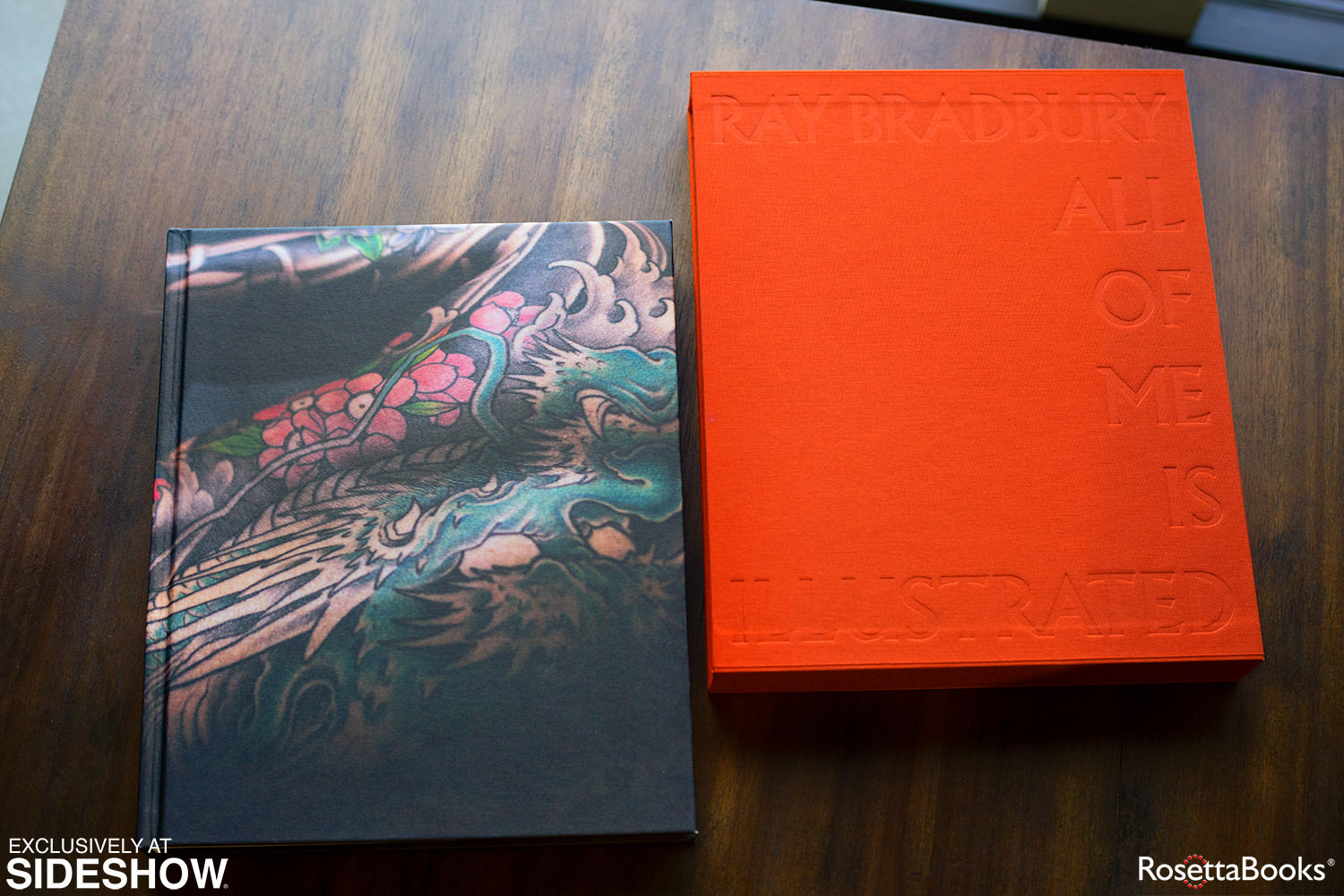 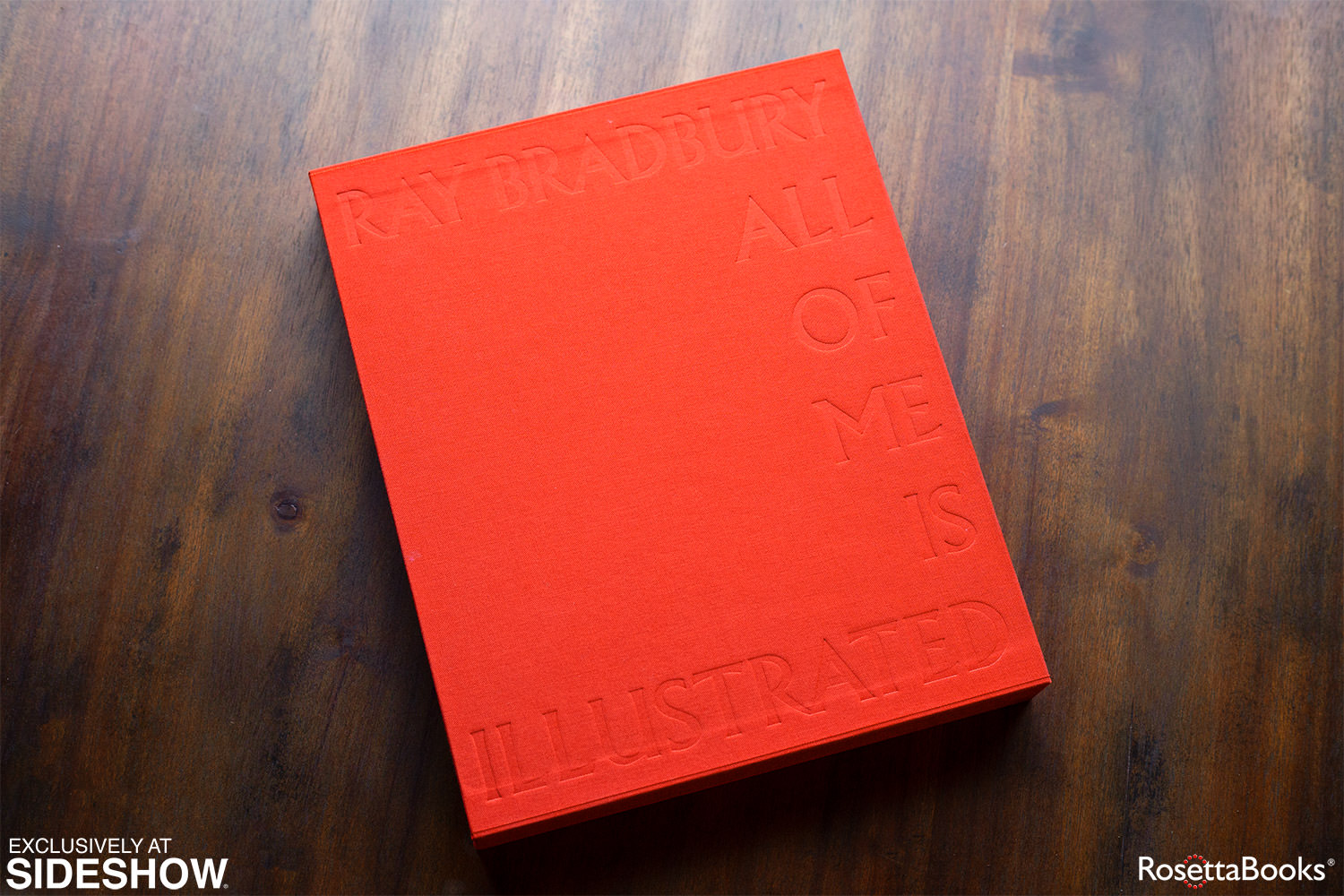 All of Me is Illustrated (Deluxe Edition)

All of Me Is Illustrated is the first book to feature Ray Bradbury’s treasured stories “The Illustrated Man” and “The Illustrated Woman” together alongside the most stunning tattooed bodies of today. Bradbury’s prose reminds us so wonderfully — and at times violently and humorously — how foolish it is to assume the origins and meanings behind a person’s tattoos. Just as with Bradbury’s characters, the motivations of the featured collectors and artists to ink (or be inked) vary. What is undeniable is that their illustrated bodies are a source of pride, wonder, titillation, and beauty, whether depicting the grotesque or the mundane.

“At the end of a long afternoon of being bitten by a silver snake, his body was alive with portraiture. He looked as if he had dropped and been crushed between the steel rollers of a print press, and come out like an incredible rotogravure. He was clothed in a garment of trolls and scarlet dinosaurs.”

—Ray Bradbury, from “The Illustrated Man”

Sideshow is proud to exclusively offer the Deluxe Edition of All of Me is Illustrated, signed by 12 participating tattoo artists featured throughout the luxury hardcover book. Limited to an edition size of 220 pieces, this collectible volume is a true celebration of the vibrant diversity found in both artwork and the human experience, paired with Bradbury’s iconic and inspirational writing.

Bring home this unique and visually stunning collector’s item and celebrate a beloved body of written work paired with the stunning tattooed bodies of today with All of Me is Illustrated, an unforgettable showcase of artistic mastery captured in ink.

In a career that spanned more than seventy years, Ray Bradbury inspired generations of readers in a wide variety of genres to dream, think, and create. A prolific author of more than four hundred published short stories and close to fifty books, as well as numerous essays, plays, operas, teleplays, and screenplays, Bradbury is one of the most widely translated authors in the world and one of the most celebrated writers of our time. His enduring novels and short story collections include The Martian Chronicles, The Illustrated Man, The Golden Apples of the Sun, Fahrenheit 451, The October Country, Dandelion Wine, A Medicine for Melancholy, and Something Wicked This Way Comes.

Interdisciplinary scholar Anna Felicity Friedman has researched the history of tattooing for nearly thirty years. A collector of tattoos since 1990, Friedman writes and lectures widely about the art form, and is the author of The World Atlas of Tattoo.

All of Me Is Illustrated is directed and produced by Lawrence Schiller in cooperation with Inked magazine, and its editor Sami Hajar and photographer Peter Roessler. Schiller, the noted photographer, filmmaker, and author, is also the publisher/creator of such groundbreaking visual books as LSD (1969), W. Eugene Smith’s Minamata (1975), and Norman Mailer’s Marilyn (1972), which sold more than 16 million copies worldwide. In 1974 he arranged for the publication of The Faith of Graffiti, the first book to capture the burgeoning art movement—and was “like a bible to later graffiti artists,” according to Brian Wallis, chief curator at New York's International Center of Photography.

The All of Me is Illustrated (Deluxe Edition) Signed Hardcover Book features: