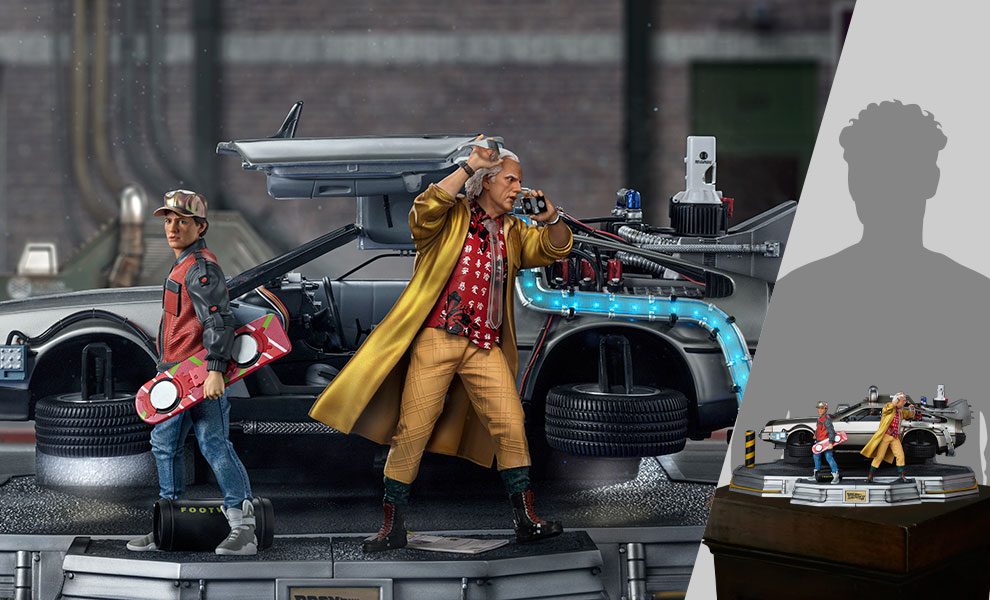 The young Marty McFly and his friend, Dr. Emmett Brown, newly arrived in the hypothetical future year of 2015, wear special futuristic outfits to go unnoticed. They plan their next steps alongside their time-shifting vehicle, the iconic Delorean Time Machine, which floats over the base of a street in the town of Hill Valley in the future.

The vehicle was faithfully replicated with all the details of the original one, with cables, wires, and gadgets, full of internal and external lights, and even with the so-called Mr. Fusion, which produces fuel from waste (preferably organic). With a light in its unmistakable flux capacitor, wheels raised in flight position, the vehicle is supported by a side rod, similar to the one used in the movie scene. Last but not least, the open seagull door, which reveals the interior of the Delorean and the circuit of time. The material used for the production of the vehicle was, for the most part, resin, with a minimum of plastic parts used in its composition. Sideshow and Iron Studios proudly present its first statue version of the fantastic "DeLorean Set Full Deluxe Version 1:10 Art Scale Statue," which provides the backdrop for this diorama.

In the second part of the movie trilogy of the Back to the Future franchise, Marty McFly and Doc Brown travel to the imaginary future year of 2015 with the legendary DeLorean Time Machine, enhanced with a flight mechanism. The statues are the result of hard work of study and development by the Iron Studios team, which worked with maximum synergy to create this diorama that brings together all the nostalgia of the movie and the pop culture of the 1980s.