Skip to main content
Low Stock and Available NOW 🚀 - Get these collectibles before they're gone for good!
https://www.sideshow.com/collectibles/16285 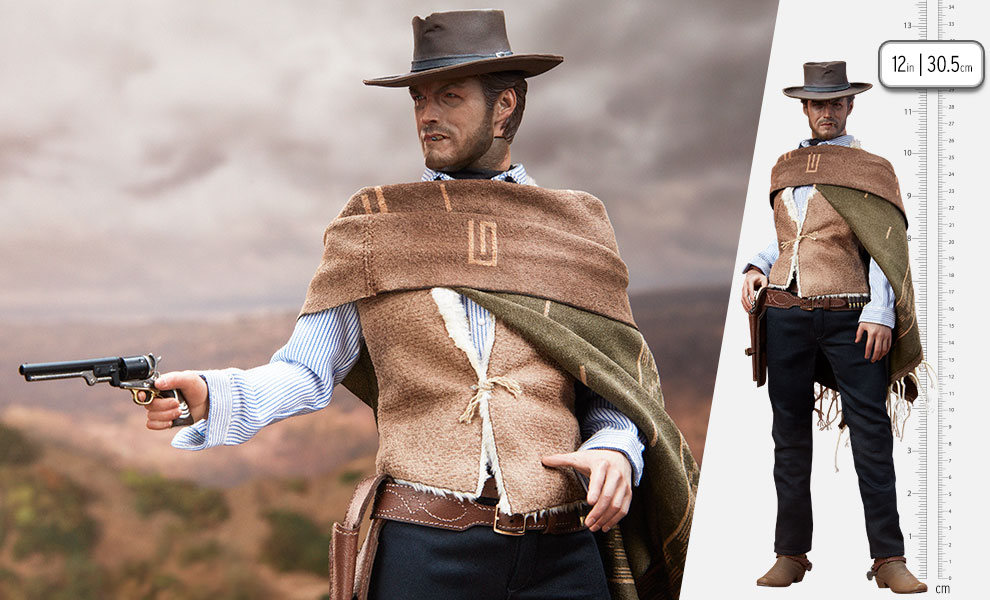 The Man With No Name

Sixth Scale Figure by Sideshow Collectibles The Good, The Bad, and The Ugly
Limited Edition

“You see, in this world there’s two kinds of people, my friend: Those with loaded guns and those who dig. You dig.”

Sideshow presents The Man with No Name Sixth Scale Figure, the debut figure of the Clint Eastwood Legacy Collection celebrating the actor’s extensive career in film.

Based on Clint Eastwood’s appearance in Sergio Leone’s essential spaghetti Western film The Good, The Bad and the Ugly, The Man with No Name Sixth Scale Figure features a meticulously crafted, steely-eyed portrait with a non-removable hat and cigar. Called “Blondie” by Tuco, the mysterious drifter wears a custom-tailored fabric costume including a dress shirt, pants, a pistol belt with holster, a faux leather vest with faux fur lining, a neckerchief, and a removable serape.

The Man with No Name Sixth Scale Figure is articulated to allow for numerous display options utilizing the accompanying additional hands and accessories. This bounty hunter’s tools of the trade include a pistol with an embossed snake grip design, a large rifle, a rock, and spurs on the heels of his boots. The figure also comes with nine hands in total — a pair of fists, a pair of relaxed hands, a pair of gesturing hands, a right rifle-holding hand, a left rifle-supporting hand, and a right pistol-holding hand. Craft dynamic and dramatic poses for the gunslinger on your shelf of Western collectibles and pay tribute to this iconic figure in cinema.

If you’ve got a fistful of dollars burning a hole in your pocket be sure to bring home The Man with No Name Sixth Scale Figure from Sideshow’s Clint Eastwood Legacy Collection today.

The Man With No Name Sixth Scale Figure specially features:

Tabletop View — The Man With No Name Sixth Scale Figure