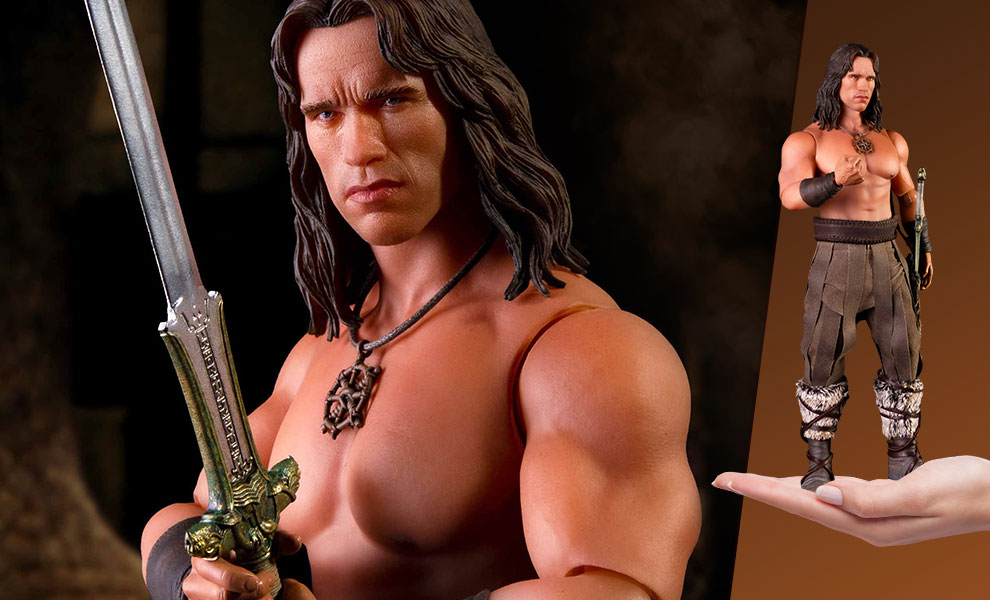 The road is long and hard that leads Conan the Cimmerian from the slaughter of his people to the vengeance he seeks. His life has been a grueling, fiery crucible in which a fearsome warrior was forged, leading him, ultimately, to a singular moment. And in that moment, high atop the great pyramid of the Temple of Set, Conan at last comes face-to-face with his lifelong nemesis, Thulsa Doom, and exacts his revenge.

Sideshow and Chronicle Collectibles present the Conan the Barbarian Sixth Scale Figure. Featuring a remarkable likeness of Arnold Schwarzenegger in his role as the titular character from the 1982 John Milius classic, the figure depicts Conan as we remember him from the film’s climactic scene, during his final confrontation with Thulsa Doom.

The fully sculpted portrait caps an all-original, muscular sixth scale body created specifically for the character, featuring multiple points of articulation. The figure comes clad in the pants Conan wore during the battle at the Mounds, with his feet protected by faux-fur-wrapped boots. Conan is armed with his Atlantean Sword, which the figure can either wield or wear at his side with the included faux-leather belt and scabbard. Additional costume options include the Wheel of Pain necklace, a Cult of Set medallion, and an Eye of the Serpent amulet necklace.