Skip to main content
🍎 We're celebrating NYCC with HUGE Savings. Up to 30% off! 🍕
https://www.sideshow.com/collectibles/8094

“I was grafted together for the pitiful purpose of another's pride. In my making, you've unleashed more than just a mindless beast. Now feel my wrath!"

Sideshow presents the Odium: Reincarnated Rage Maquette, the latest addition to our original Court of the Dead Collection.

Odium was forged by the hands of Queen Gethsemoni, leader of the Faction of Flesh and mother to all the Underworld. Odium stands as a testament to Gethsemoni’s necromancy... but also to her mercurial nature... and her pride.

From his ruthless stare and massive body, to the decaying bones of his opponents beneath his feet, The Odium:  Reincarnated Rage Maquette is the epitome of savagery. This towering behemoth is crafted primarily from PVC with detailed elements in fiberglass and resin.

When asked about his design process, Amilcar Fong said that he used “pure rage” as his compass. Casey Love, the painter of the Odium, said: "For his armor we wanted to go with some magical element running through, as though this gave him some power and drives his will to conquer anyone who dares to stand in front of him."

"Odium’s armor is very distressed with pits of weathering and rust yet there is a beauty in the metallics coming through all this aged decay with some magical bluish pearlescent tones riding throughout the high points of the armor’s texture,” added Love. “Odium is by far one of my favorite pieces from the ever-growing Court of the Dead line.”

The Odium: Reincarnated Rage Maquette includes a mask with the symbol of the Flesh Faction branded across its forehead. Odium also comes with a separate stand for the mask, so you can display this symbol of faction pride when Odium is not wearing it.

Bask in the glory of Flesh’s power and add the presence of rage incarnate to your collection with the Odium: Reincarnated Rage Maquette!

Everytime I think this line has already did it's best something new comes along blows me away, Odium is gigantic and the pose looks so good, some people had wondered if Odium actually fit in with the Court, well just sit him beside Mortighull and imagine the battle between the two and you will have no questions!

I have a couple of Court pieces, but decided to add this to my collection because of Casey's work. I have several of Love's pieces and very much enjoy his use of colors. This piece is no exception. 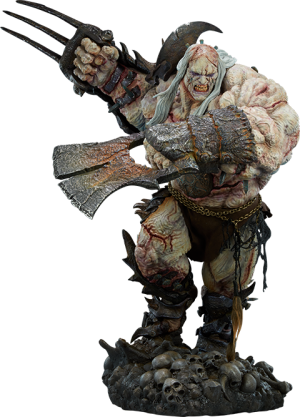