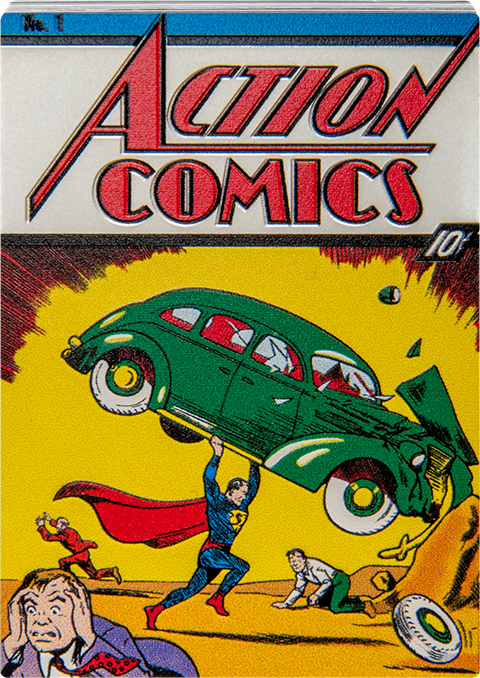 About This Silver Collectible

The Holy Grail of Comic Books on New Silver Coin!

Amazing news! Sideshow and New Zealand Mint are proud to present the first COMIX™ Coin, based on the most popular and sought-after comic books! This first release features Action Comics #1, aka the Mona Lisa of comics.

The face of the coin shows a colored image of the first issue of Action Comics from June 1938, featuring the first appearance of SUPERMAN™. To mimic the comic book, it is crafted into a rectangular coin and includes further colorization on the four sides to represent the spine and pages. Small flashes of silver have been left on the cover to catch the light!. It may seem too good to be true, but this is still a legal tender coin, with the Ian Rank Broadley effigy of Queen Elizabeth II engraved on the obverse.

Created in partnership with Warner Bros. Consumer Products, each coin is nestled in black velvet and placed in a secure, custom-designed box. The packaging incorporates a large window so you can show off this brilliant collectible. A Certificate of Authenticity is printed on the box, alongside the coin’s unique serial number in the limited mintage of just 5,000 coins.

Don’t miss your chance to grab this one-of-a-kind replica today!