Skip to main content
🍎 We're celebrating NYCC with HUGE Savings. Up to 30% off! 🍕
https://www.sideshow.com/collectibles/12382

After years of hiding, Bruce Wayne is forced out to overcome his past when a ruthless mercenary called Bane takes control of the underworld and threatens the whole of Gotham City. With the help of the mysterious Catwoman and his butler Alfred, Bruce must don the cape and cowl again to protect the citizens of Gotham from their greatest enemy yet.

Batman is always one of the most recognizable superheroes in the DC universe. Recreated in accurate proportions, Hot Toys is excited to present the true-to-movie creation from our proud DX Series, the Batman Sixth Scale Collectible Figure inspired by The Dark Knight Rises.

Crafted with sophistication and based on the appearance of Christian Bale as Batman/Bruce Wayne in the film, the highly detailed Batman figure features two newly developed Batman helmeted head sculpts with interchangeable faces, including one with LED light-up function and one with separate rolling eyeballs features. In addition, there is a newly developed head sculpt of Bruce Wayne displaying marvelous craftsmanship, a newly designed body with a wider range of articulation highlighting Batman’s strong and muscular form, finely tailored Batsuit completed with weave carbon fiber-like detailing, Batman’s fancy gadgets including EMP rifle with LED light-up function, sticky bomb gun, grapnel gun, Batarangs, and mini mines, as well as a highly elaborate stone-like diorama figure base for display.

I've been collecting for years, even decades. But this is my first Hot Toys figure. And what can I say, Well...it's Amazing. I missed the Nolan Batman collection the first time round. So when HT re-released it this time I jumped at the opportunity. It's a stunningly detailed take on Christian Bale's Batman. Worth every penny with no regrets on purchasing. Can't wait for the Tumbler and Batman begins to come next.

It is a very good figure and is a must have for collectors, this figure is much better than my other Sideshow figure (John Wick). The head is magnetic and has adjustable eyes, the head sculpt is also much better. 10/10

5
Myron T. 5 star review
Where are they?!
Verified Purchase

Wow!! This is probably the best Batman figure from the Dark Knight trilogy ever! FYI: this is the third iteration of the figure from Hot Toys and for those who has the older versions I would say this is definitely worth the upgrade. The Bruce Wayne head sculpt is on point and perfect, they added more details to the face and skin textures and redid the hair portion as well. I missed out on the other two Batman Dark Knight figures, but I’m glad I did and waited for Hot Toys to release the DX19! I have the InArt Joker coming from Queen Studios, so it’ll pair nicely with this Batman figure I got from Sideshow! Super happy with this purchase! Thanks to Sideshow and Hot Toys for delivering another amazing figure into my collection! 😌👌🏻🔥

Worth every single dollar!!! Sideshow customer service so amazing

^_^ Always have been a huge DC Supporter since a youngling and absolutely love this articulated piece of Christian Bale’s portrayal as Bruce Wayne ~ A.K.A ~ Batman! His 1/6 scale Dark Knight Trilogy Appeal is unexplainably authentic from his armored chest plate and nanotech suit + utility belt to his gadgets + artillery of grapnel gun to batarangs. His cape is ideally iconic as is the craftsmanship of his entire physical form. Excited and joyous customer 4 sure. Those whom received this extraordinary piece of memorabilia or plan to purchase it will be Wayne Manor Content & Gotham City Golden! 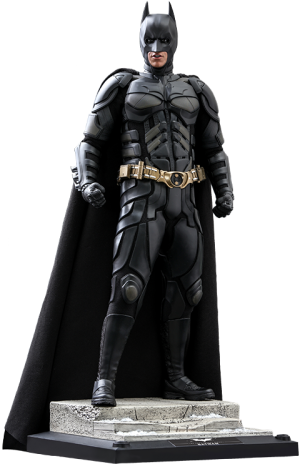