Skip to main content
Daily Deals Up to 50% OFF 👍
https://www.sideshow.com/collectibles/2803

A special edition is available when customers purchase both Batman v Superman: Dawn of Justice 1/6th scale Batman exclusive and Superman exclusive figures at the same time. Customers will receive an additional Batman Tech Cowl as a bonus accessory while supplies last.

“That's how it starts. The fever, the rage, the feeling of powerlessness that turns good men... cruel.”

Batman v Superman: Dawn of Justice, the epic blockbuster by DC Comics and Warner Brothers, will hit theaters around the world in March 2016! In this thrilling new film, Gotham City's own formidable and forceful vigilante, Batman, will take on Metropolis' most revered modern-day savior as he fears the chaos the god-like Superman can bring upon the world if the Kryptonian’s powers are left unchecked.

This movie-accurate Batman collectible figure is specially crafted based on the image of Ben Affleck as Batman from the film and features a newly developed masked head sculpt with 3 interchangeable eye parts and lower faces, a newly developed body which can naturally portray Batman’s muscular look, meticulously tailored Batsuit, detailed Batman gadgets, and a specially designed Batman v Superman: Dawn of Justice themed figure stand. This exclusive version will include an additional sniper rifle and Batman Tech Cowl as bonus accessories.

The movie-accurate Superman collectible is specially crafted based on the image of Henry Cavill as Superman in the movie and features a newly developed head sculpt, movie-accurate body proportion, newly tailored Superman costume with embossed pattern, the iconic red cape made with new material, and a specially designed Batman v Superman: Dawn of Justice themed figure stand. This special edition includes an additional LED light-up Kryptonite as a bonus accessory. 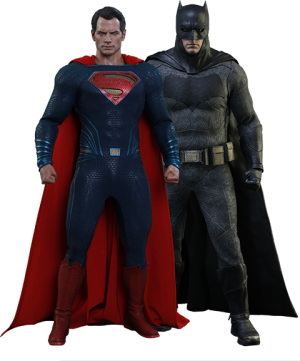