Skip to main content
Today Only ⏰ Up to 45% OFF Daily Deals
https://www.sideshow.com/collectibles/15659

On a base in the form of twisted metal, from the skull remains of the Kryptonian robotic supervillain Brainiac, or one of his mechanical creations, a mighty young hero flies in his skintight blue and red uniform, with the unmistakable "S"-shaped symbol coat of arms on his chest, and a peculiar black leather jacket to express his rebellious identity. Ready to deliver its mighty blows with its red gloved fists, Iron Studios presents the Superboy DC Comics Series #7 Art Scale 1:10 statue featuring the Boy of Steel, allied with the Superman family and the Teen Titans!

Created by Project Cadmus, Superboy was first presented as a duplicated meta-human clone and the closest genetic equivalent of Superman, but it was later revealed that the young hero was a Kryptonian/human hybrid made from Superman's DNA plus his archenemy Lex Luthor's. Created by writer Karl Kesel and artist Tom Grummett in 1993 after Superman's supposed death at the hands of the Kryptonian monster Doomsday, Superboy was created and named Experiment 13 to replace the Man of Steel. He emerged calling himself also Superman, but later became known as Superboy. After the return of the original Man of Steel, Superboy was given the Kryptonian name of Kon-El, after Kal-El's cousin (Superman), and lived, for a while, with Clark Kent's adoptive parents in Smallville gaining a new civil identity as Conner Kent. Acting alongside Superman, and as a member of the group Young Justice and Teen Titans where he became best friends with Tim Drake (Robin) and Bart Allen (Kid Flash), the young hero is seen as a modern take on the classic Superboy.

A DC Comics blockbuster in the 1990s, Superboy won appearances in TV adaptations of series and animations, in animated feature films and games, and is now available for Pre-Order in this collectible statue by Iron Studios! 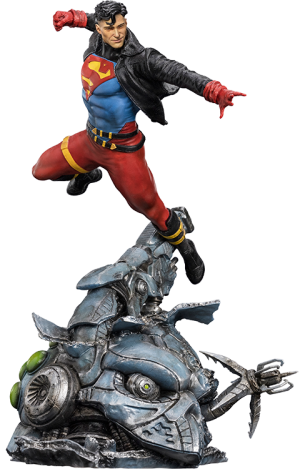