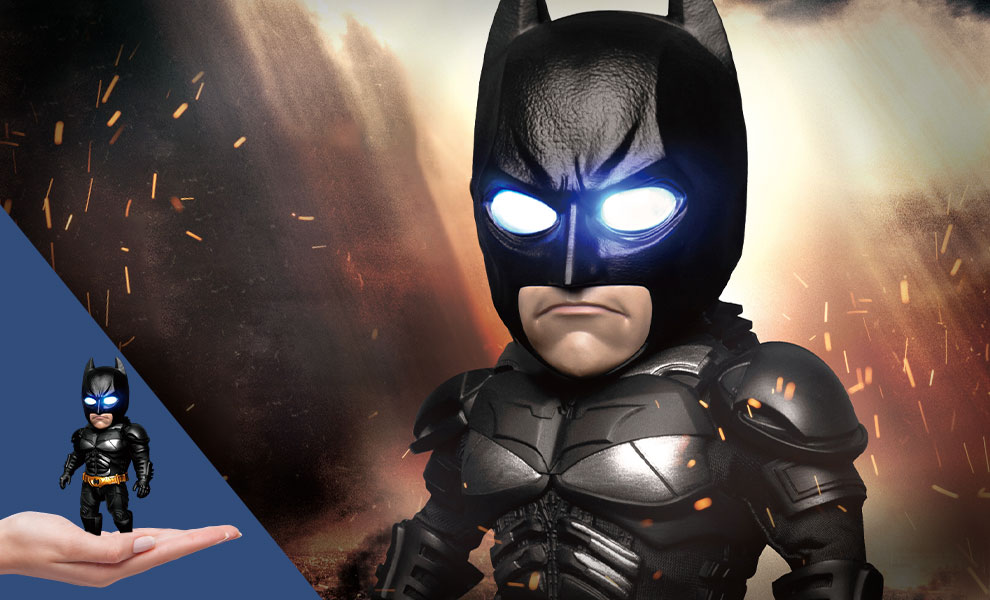 “Sometimes the truth isn’t good enough! Sometimes people deserve more, they deserve to have their faith rewarded” noted Batman in Christopher Nolan’s now famous Dark Knight trilogy of movies. And rewarded fan’s will be, with the classic Batman armor recreated in all the EAA (Egg Attack Action) glory!

From Beast Kingdom. Beast Kingdom is back once again with the latest EAA 6-inch action figure: The Dark Knight Batman. Based on the classic portrayal of the Dark Knight by Christian Bale, the figure uses high-quality painting techniques, plus features the black matte PVC suit with cloth accents and an assortment of accessories, including a batarang, smoke bomb, pistol and a pulse rifle. Also included are four pairs of replaceable hands, two interchangeable mouth pieces for the head sculpt, and a special branded stands with brackets to give collectors ample way ways to pose the figure!

Beast Kingdom’s ‘Entertainment Experience Brand’ is back once again with the latest EAA 6-inch action figure: The Dark Knight Batman. Based on the classic portrayal of the Dark Knight by Christian Bale, the high-tech armor was the highlight of the trilogy. For the first time in a Batman’s history, the suit had a very high level of articulation on screen, which perfectly translated into the EAA highly articulable action figure range. Using high-quality painting techniques the, black matte PVC suit and real cloth is accompanied with a selection of Batman‘s favourites accessories, including batarang, smoke bomb, pistol and a pulse rifle.

In addition, the Deluxe Edition also includes an added ‘Sonar Mode’ head sculpt with light up eyes, and Batman’s cape backpack, in addition to four pairs of replaceable hands and three interchangeable mouth pieces for the head sculpt. Topping off the Deluxe Edition set, is a highly detailed recreation of the construction site scene as a base to show off Batman’s dark mood! The incredible range of accessories gives collectors ample way ways to pose the figure from the many amazing scenes featured in the movies. For fans of the seminal franchise, make sure to grab your own Dark Knight Batman action figure today!