Skip to main content
Sideshow's Daily Deals are not to be missed!
https://www.sideshow.com/collectibles/10736

The characters from the asymmetrical multiplayer (One Killer vs Four Survivors) horror game "Dead by Daylight" are recreated as 1/6 scale premium statues.

The high-mobility Killer "Hillbilly" puts Survivors into critical condition with a single blow of his chainsaw and is the third release in this series.

The silhouette of the unnaturally swollen head and hideously twisted spine, inspiring feelings of fear, is perfectly captured here.

The infected skin sores are carefully sculpted to highlight the weirdness of the character.

Under the ugly tortured face the haunting dead eyes feature light-up LEDs glowing white in the darkness. And just like in the game the areas he stares at are lighted in red, the LED on this statue can be switched to red to create the same atmosphere.

Bloodstains and dirt are vividly painted on the detailed texture of the shirt and jeans, creating another powerful highlight.

The chainsaw which makes fearful loud noises in game, is precisely sculpted digitally: meanwhile, the brutal hammer is sculpted by hand emphasizes the brutality of the character.

The base is made in the image of the "Coldwind Farm," his hunting ground with broken pallets scattered around his feet.

I think its beautiful, although very sinister. I love how the eyes light up into 2 different colors of red and stark white when turned on behind the back of the skull.
Its a work of art, sculpture has many details and stands proudly in my cabinet to which I get many rave reviews from my friends.
Worth it!! 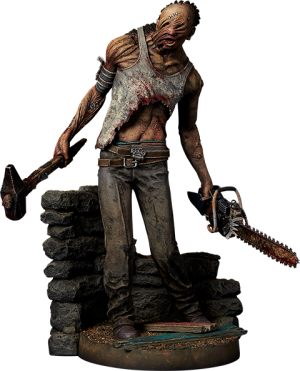