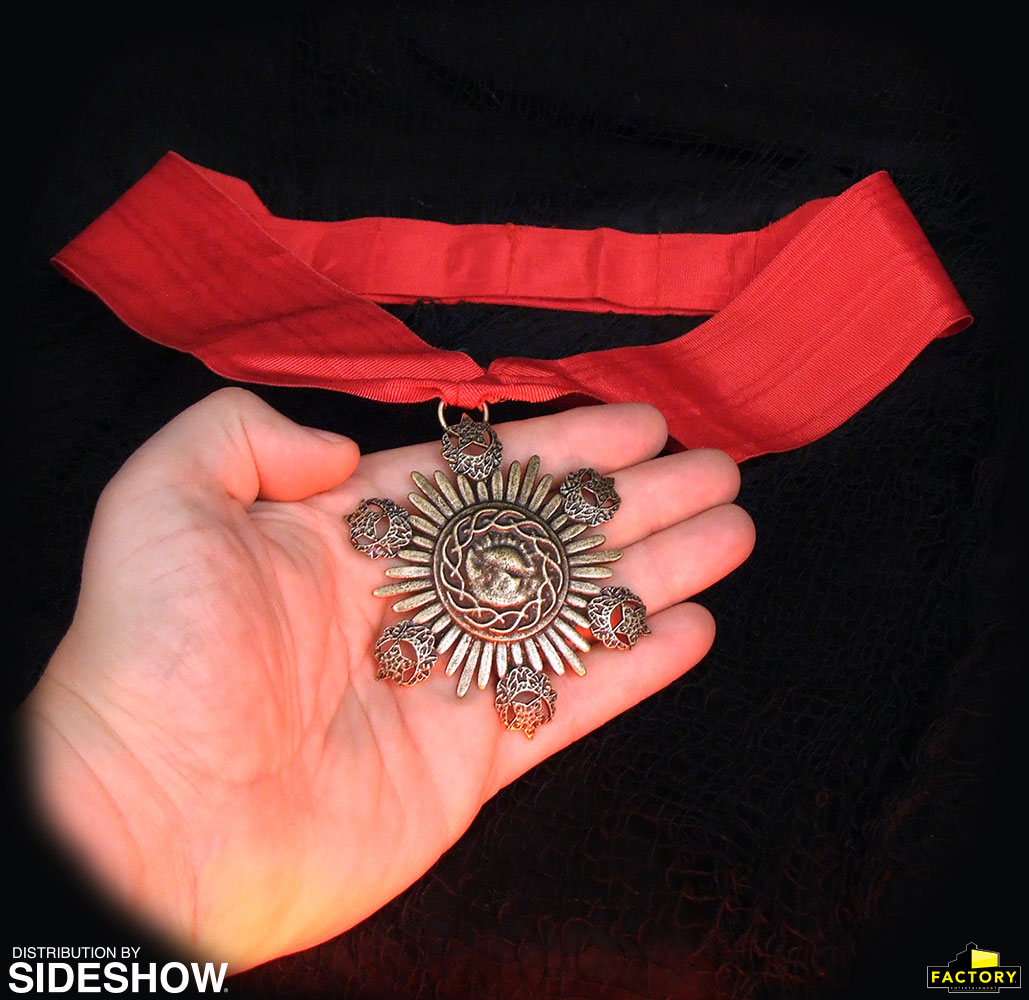 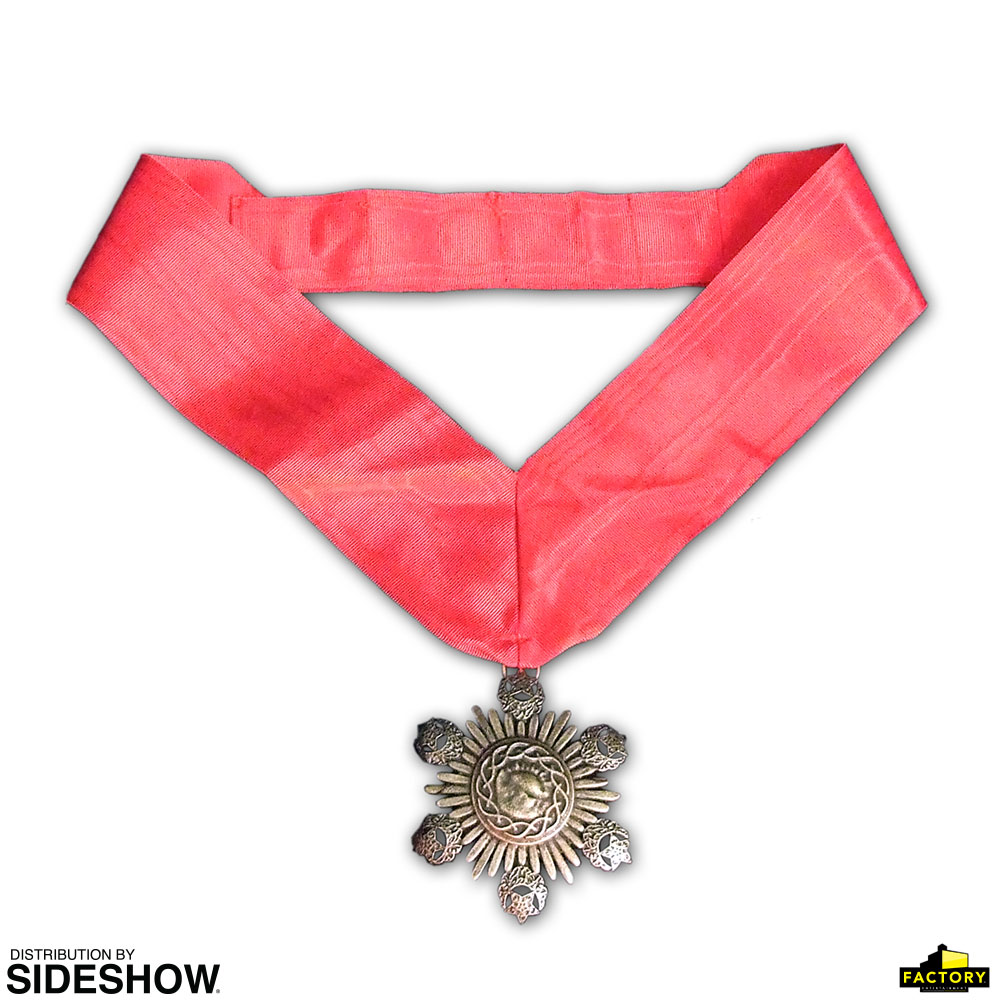 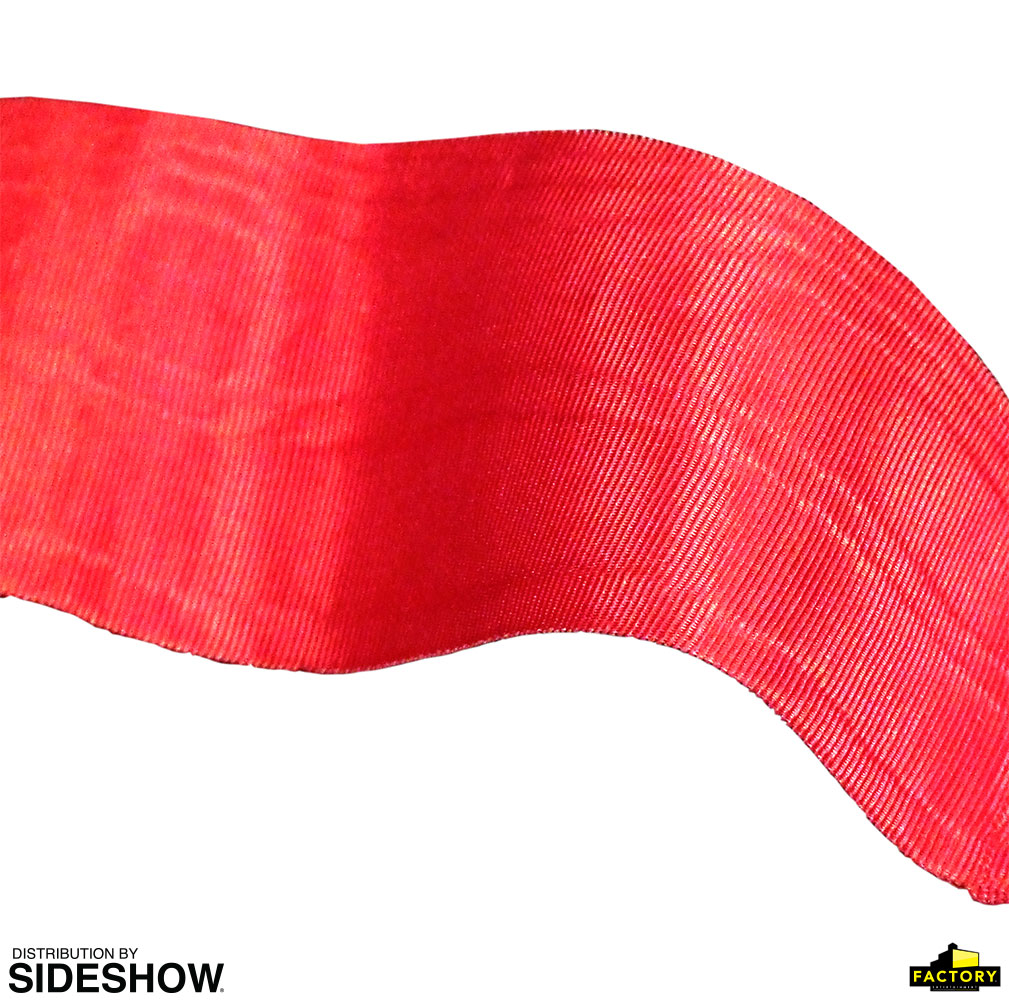 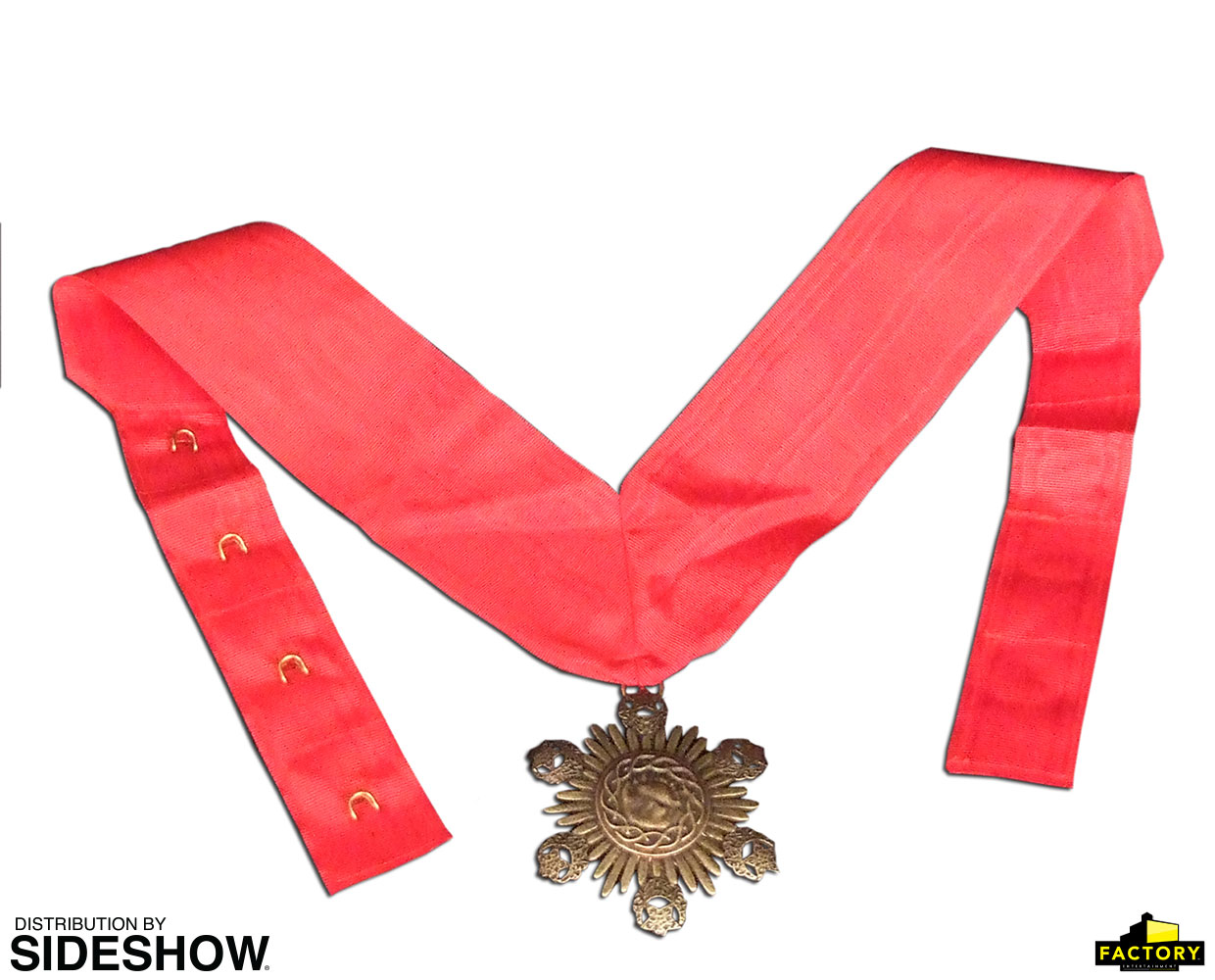 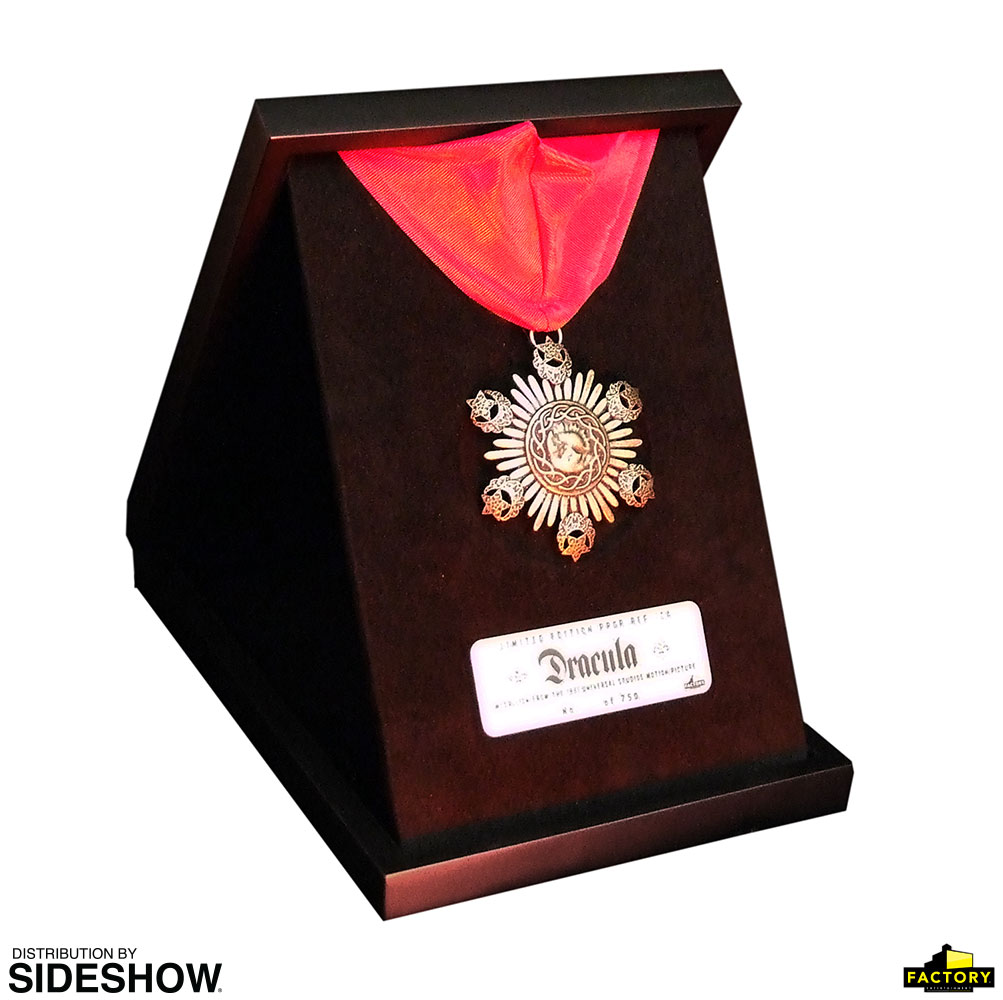 The Medallion of Dracula

It is Bela Lugosi’s portrayal of the Count in the Universal Studios film that has established itself in pop culture as THE image of a traditional vampire, the classic ‘aristocratic vampire Count’. It is this version of Dracula that has endured and has been imitated and copied countless times and the medallion is one of its more visually striking elements of that look.

The costume design was a deliberate attempt to emulate the formal evening attire of the early 1900s. Part of this attire for an aristocrat, noble or decorated individual was often a neck order. A neck order is a decoration denoting rank, status and/or achievement, worn around the neck with evening dress, as opposed to a ribbon on the chest which is traditionally worn with a uniform.

What is interesting is that Dracula’s neck order or medallion only appears in a few scenes in the early reels of the film and then disappears. Yet it became indelibly ingrained in the public consciousness. This impact was undeniably helped by the fact that Bela Lugosi wore a reproduction medallion of a different design during numerous live appearances and performances in character as Dracula both promoting the film and after the production. According to Hollywood lore, he was even buried with a reproduction medallion on his death in 1956.

Even with its brief screen time the medallion, like the Count himself, endures and has become immortal

Mystery surrounds the original prop. No known example survives and there is, in fact, anecdotal evidence that it was actually lost or damaged during the production, which may explain its disappearance after the third reel of the film.

All of the major cast and crew connected to the original medallion prop are now deceased, and no production records concerning it remain. Additionally, good quality reference images of the original prop are almost non-existent.

This, of course, makes producing a replica challenging, but not impossible. Factory Entertainment dedicated over a year of research and investigation before beginning production to ensure that this replica would be the most accurate ever produced and that any creative decisions made with respect to the details of the medallion, in the absence of an actual original prop to study, were made with the highest level of care after consultation with experts and examination of the available reference and historical context.

The original prop is a star-shaped sunburst and has six crescent & star finials. This motif is very common in the late 19th and early 20th-century Islamic world and is seen on many antique medals and decorations of that period from the Ottoman Empire and Kingdom of Afghanistan which bear striking similarities to the original prop. Both of those political entities were recently dissolved or in the process of dissolution at the time that Dracula was produced and it can be presumed that quantities of their military surplus material were available on the open market and would not have been considered particularly valuable. Factory Entertainment sought the opinion of a noted expert on antique medals and decorations and author of several books, who confirmed that the original prop is not a direct copy of any known antique medal or decoration, but is rather a hybrid of several styles commonly seen on the medals and decorations of the period.

Universal had released the epic film ‘All Quite On The Western Front’ the year previously in 1930, with the same Art Director, Charles D. Hall, the same producer, Carl Laemmle Jr. and much of the same crew. Therefore, period military costume and prop elements would have been widely available and familiar to the production team on Dracula.

Based on all of the above evidence, it is our hypothesis that the original prop was a specially manufactured costume piece created using simplified castings and copies from found real-world parts. Any obvious identifying marks of detail that might have betrayed the origin of those parts or that would have appeared too obvious on-screen were deliberately concealed. Any elaborate decoration or embellishment that may have caused issues in filming such as reflections or lens glare was also avoided.

Because there is no original prop to cast or copy Factory Entertainment commissioned sculptor and Universal Monsters fan Erick Sosa to create a master to be used for the casting of the replica. Erick and the Factory team spent many hours using image enhancement software to pull out hidden details in what few reference images there are of the medal.

The original prop is never seen in close up on the screen, and is almost always shot in low or subdued light which gives it a shifting, mercurial appearance. Many people over the years have speculated as to the exact detail of the prop, particularly the center motif. But based on the evidence we believe it most likely that the motif was a sun and moon. The design is deliberately naïve in style and was probably a degraded copy of a copy, cast from another piece. It is unlikely that the choice of motif was deliberate, more likely a pleasant coincidence. The requirement was probably for a vague design as it would never be ‘seen’ in detail as the film was shot in 1.37:1 ‘Academy Ratio’ format and did not have the resolution of higher definition formats that followed. A sun & moon, day & night motif, whether deliberately or accidentally conceived, is an excellent visual metaphor for a creature of the night.

The ribbon used on the replica is a watermarked bengaline style and is an accurate replica of a formal neck order ‘accouterment’ with a hidden adjustable fitting. The color of the ribbon was determined after subjecting the original black and white images to digital color recovery software. The medal itself has been cast in a heavy bronze/gold alloy and antiqued. The color was matched to the original black and white images using the same digital color recovery software.