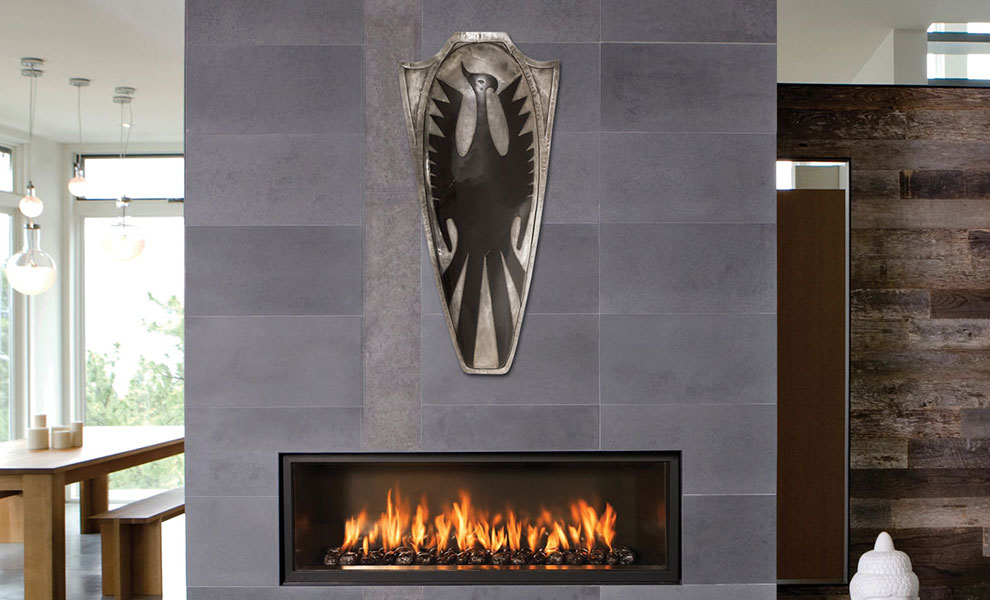 Originating from the fertile and stunningly creative mind of Frank Frazetta in 1973, the Death Dealer fantasy painting depicts this now famous icon as a menacing armor laden warrior with horned helmet sitting atop a fierce steed while holding a stunning, bloody axe and shield.

He is eventually identified through stories, this painting inspired as Gath of Baal- a tribeless barbarian dealing death to all that oppose him.  To help him in his battles one of Gath's love interests gives him the menacing helmet which was possessed by the god of death. The helmet gives him godlike power, but at a price.

So influential and important was this painting it was officially adopted by the USMC Helicopter Squadron VMM 164 and the III Corps of the US Army as their mascot.

Museum Replicas is proud to work with the Frazetta Art Museum to bring this icon of fantasy to life.

This massive Death Dealer shield shows the battle scars of many campaigns.  It is an incredible addition to the Frank Frazetta Signature Edition line. Made from hand formed steel by the master smiths at Windlass Steelcrafts, it is accurately curved to accommodate the Death Dealer's muscled arm. Featuring an antique finish with adjustable leather straps in the back and gripping handle. It also exhibits the scars from many a battle.

Frank Frazetta was one of the most prolific and important artists of his time and has inspired generations of fans and continues to inspire artists today.  His work can be seen in movie posters, cover art, paintings, comic books, LP record albums and many other places. He was inducted into the comic book industry's Will Eisner Comic Book Hall of Fame in 1995 and the Jack Kirby Hall of Fame in 1999.

Proceeds benefit the Frazetta Art Museum which strives to present and inspire through Frank's art and preserve these amazing works for the next generation. www.frazettaartmuseum.com