Skip to main content
Sideshow's Daily Deals are not to be missed!
https://www.sideshow.com/collectibles/9529

The premise is simple: a black cat loves scheming a white mouse who incessantly throws bricks at the cat’s head, which police dog Officer Pupp, secretly harboring a passionate love for the cat, tries to prevent.

It was thanks to media tycoon William Randolph Hearst, a confirmed fan who gave Herriman carte blanche in his newspapers, that the artist was allowed to freely explore countless absurd and melancholy variations on the theme of unrequited love for years on end. Herriman unabashedly took advantage of this, radically exploring the medium’s potential and pushing all of its formal boundaries; readers had to put up with surreal, Dadaist sceneries, a language that whirled slang, neologisms, phonetic spelling, and scholarly references, and diffuse gender roles—making Krazy Kat probably the first gender-fluid star in comic history.

This volume presents all Krazy Kat color stories from 1935–1944 and a detailed introduction by comic expert Alexander Braun, who illuminates Herriman’s multi-ethnic background and reveals what makes this timeless work of art about a queer cat so extraordinary.

Visual artist Alexander Braun (born 1966) has received numerous accolades and scholarships, and his work has appeared in several exhibitions. Alongside his independent artistic activities, he studied art history in Bochum and Berlin (his 1998 doctorate thesis was on the work of the American installation artist Robert Gober). Over the past two decades, Braun has compiled one of the most extensive collections on the history of comics. Since 2008, he has curated several museum exhibits on this topic, including a comprehensive retrospective on the work of Winsor McCay in 2012/2013. In 2011, he founded the German Academy of Comic Art.

Great book! But then I'm partial to kats. Alexander the Great said: "If I wasn't Alexander the Great I'd want to be Diogenes of Sinope." Maybe Diogenes in his turn said: "If I wasn't Diogenes of Sinope I'd want to be a house cat."? Marshall McLuhan joke about French Canada: There was a house with a pet cat and a pet dog and a mouse. The mouse heard loud meowing and dived for safety down his mousehole. Later the mouse hears loud barking. Dogs don't eat mice and they don't like cats. So mouse figures it's safe to come back out. On his way down into the cat's stomach, mouse hears cat say: "There are advantages to being bilingual." MM: "Every joke expresses a grievance. The funny man is a man with a grudge." Long live Krazy and Ignatz! Meow! 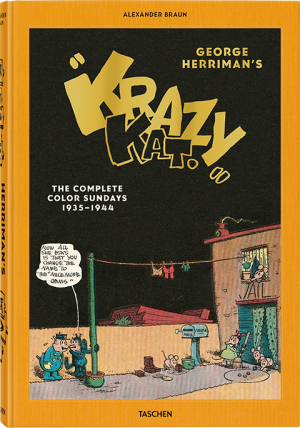