Skip to main content
Looking for a special offer? 👍 Look no further! SHOP ALL DISCOUNTS
https://www.sideshow.com/collectibles/12974 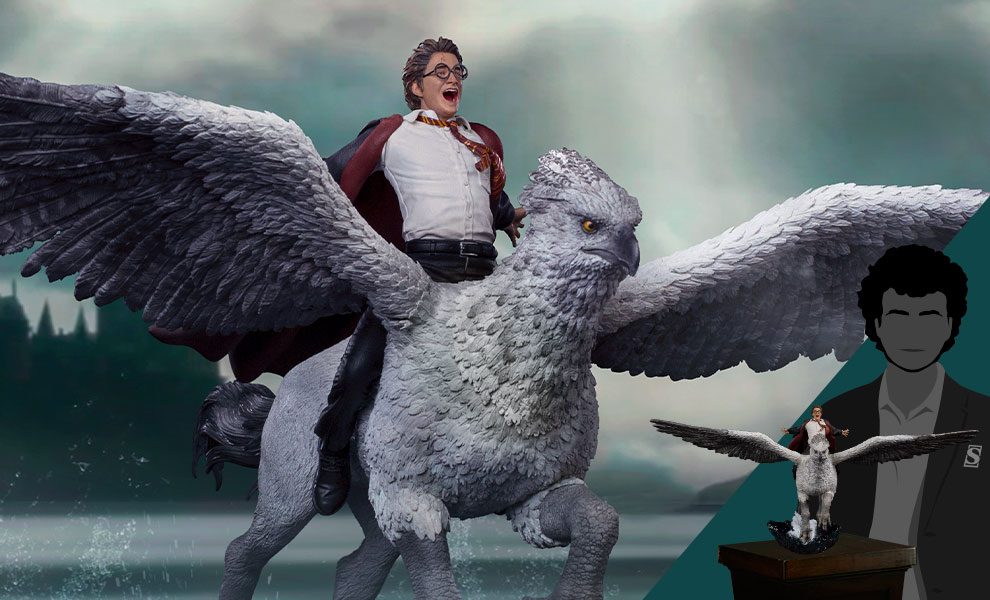 Buckbeak is a fantastic creature, known as a hippogriff, with a gray tinge. Its back, legs and paws are like those of a horse, and its head and its front are like a bird of prey. The fantastic creature even has long wings that allow it to fly. Enthusiastic and full of adrenaline, provided by his first flight riding through the skies of Hogwarts, the young wizard, Harry Potter, screams and opens his arms when his new friend, and mascot, slides his right front paw across the waters of a lake in a sweeping maneuver. This iconic scene from the movie Harry Potter and the Prisoner of Azkaban is also proudly replicated by Iron Studios in the "Harry Potter and Buckbeak Deluxe Art Scale 1/10 - Harry Potter - Iron Studios" statue.

Hagrid, the gentle Hogwarts game-keeper, introduced Buckbeak to Harry Potter in his first class of Treating Magical Creatures, and the young wizard's admiration and respect for the hippogriff earned his trust. Subsequently, Buckbeak was sentenced to death for attacking Draco Malfoy, after the boy insulted him, but Harry and Hermione Granger saved him and the animal helped escape Sirius Black, who is Harry's godfather. After Sirius' death, Buckbeak was inherited by Harry who left him again in Hagrid's care, disguised with the name of Asafugaz.

With Harry with open arms mounted on Buckbeak, with extreme care in every detail, seeking maximum fidelity both in the creature and in the figure of the protagonist played by actor Daniel Radcliffe, on a translucent base representing the lake of Hogwarts, the statue is added to the line of Harry Potter collectibles from Iron Studios, which represent remarkable moments in the films of the saga created by British writer J.K. Rowling.