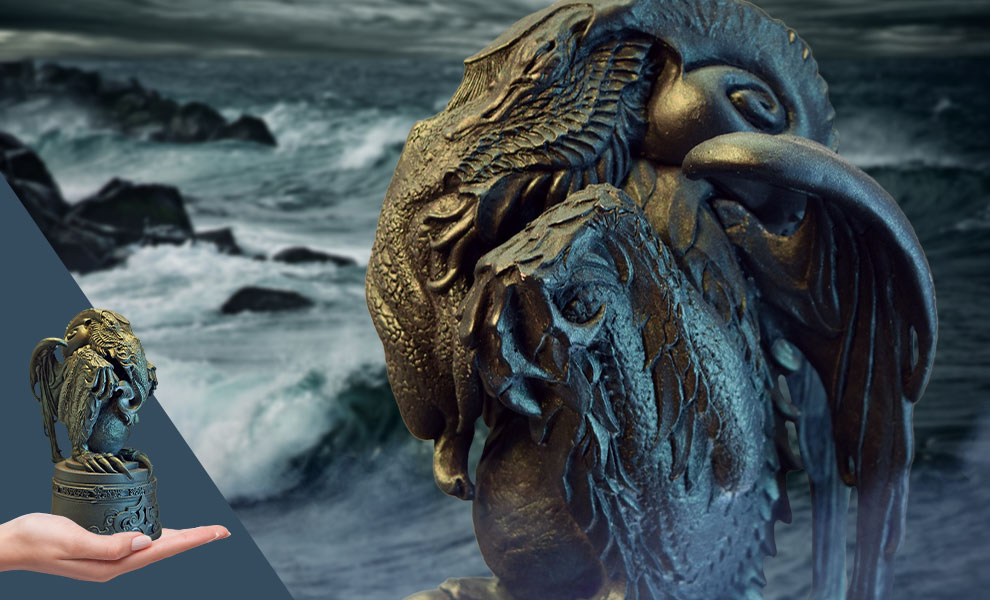 Statue by Flights of Imagination by Stephen Hickman
Limited Edition 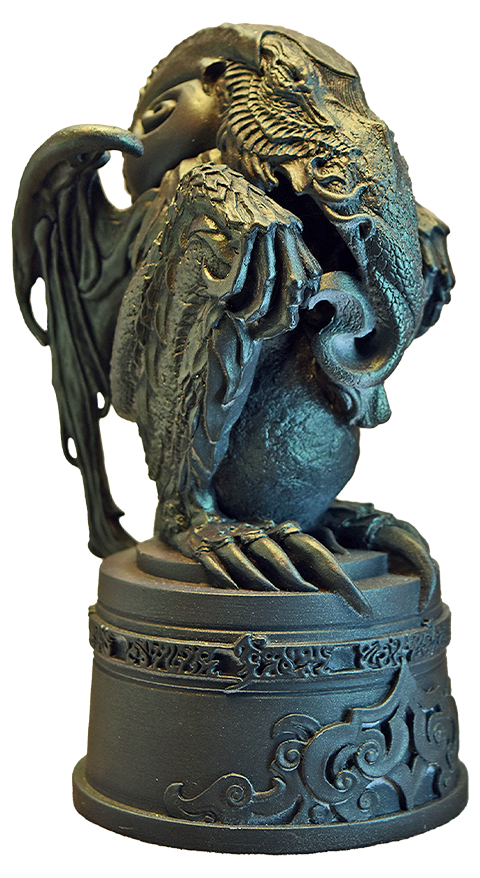 H.P. Lovecraft has been called the first of the modern horror writers-a gifted amateur astronomer in his teens, he distinguished himself from previous writers of supernatural fiction by being the first to see the possibilities of modern scientific cosmology in horror fiction. An eccentric gentleman whose stories were sometimes literal descriptions of his own dreams, Lovecraft was also a character in some of his best stories. His fiction was largely published in a pulp magazine, Weird Tales.

Horror master H.P. Lovecraft’s febrile imagination spawned a cosmos populated by horrific monsters that have held sway over mankind since time immemorial. The most powerful of them was Cthulhu, which he described as “A monster of vaguely anthropoid outline, but with an octopus-like head whose face was a mass of feelers, a scaly, rubbery-looking body, prodigious claws on hind and fore feet, and long, narrow winds behind.”

Inspired by Lovecraft’s monstrous creation, Stephen Hickman—a fantasy and science fiction artist whose work spans 45 years—has crafted the definitive portrait of Cthulhu: Drawn from Lovecraft’s original sketch, it’s fleshed out by his short story (“The Call of Cthulhu”) published in Weird Tales in 1928.

Standing around 9 inches tall, constructed of polyresin, and meticulously hand-painted in an otherworldly color scheme, Cthulhu sits on a towering base as he holds sway over a doomed world, contemplating cosmic thoughts through time without end.

Stephen Hickman has spent an award-winning career translating impressions of exotic locales into hundreds of book and magazine cover illustrations, and paintings for private commissions.

Of all the major authors he has illustrated, the works of H.P. Lovecraft are among the most challenging to interpret effectively, Hickman has found sculpture to be an expressive medium for bringing Lovecraftian creatures most vividly to life, as seen in this sculptural incarnation of the fabled Elder God of the cosmos, Cthulhu the Undying.

"The masterpiece against which all other Cthulhu designs must be compared." - Concept artist and sculptor, Jordu Schell.

"I've been a lifelong fan of fantastic literature, and one of my favorite authors (and one I discovered very early) is H.P. Lovecraft. Stephen Hickman, in addition to being a superb illustrator, is a very accomplished sculptor. His three-dimensional vision of Lovecraft's cosmic entity Cthulhu is, to me, by far the best I've seen: bizarre and otherworldly, with an ancient, ominous and haunting presence; as if no human hand had fashioned it!" - Disney Imagineer Tim Kirk

"Stephen Hickman is brilliant in his sensitivity to textures, convincing anatomy, and dynamic design, breathing life into this new, surreal sculpt from the Cthulhu Mythos." - Donato Giancola

"Stephen Hickman needs no introduction to fantasy art lovers, as he is one of the most highly individual and accomplished contemporary purveyors of that challenging genre. His depiction of Cthulhu is a modern day masterwork, uncannily alive and fascinating in his coiled and timeless menace, a perfect melding of the haunted stories of H.P. Lovecraft and the stylistic realism of Stephen Hickman. Bravo!" - Michael Whelan

This statue, while small, includes a frightening level of detail. The paint itself is worthy of display. Highly recommended.