Skip to main content
Sideshow's Daily Deals are not to be missed!
https://www.sideshow.com/collectibles/10647

Was $4,500
Limit of 1 per person.
Add to Wish List
Share / Refer
Drop a Hint
Choose Currency
Find It Locally

The 1:5 scale Tyrannosaurus rex Maquette was monumental to the production of the film, Jurassic Park, in more ways than just as a maquette for Spielberg to approve. In the early 1990s when this film was created, there were no fancy 3D printers or scanners that could translate material into different sizes digitally. The life-size T. rex that inspired fear into everyone during Jurassic Park… is the form of mathematical calculation based on the 1:5 scale T. rex Maquette.

The maquette was used to provide a proof of concept to Steven Spielberg and using trigonometry, science and a projector, a team of 10 people dissected a casting of the 1:5 scale T. rex into slices to analyze the shape of each piece of the T. rex. From there, using the projector, each piece was exaggerated to 5 times the original size. This allowed Stan Winston Studios to create an outline of each piece of the 1:5 scale T. rex in plywood, to assemble on an aluminum and steel structure to create the inner structure of the 1:1 T. rex. After applying wire, fiberglass resin, clay, and many man-hours to the structure, the T. rex came to life as a magnificent 45′ sculpture.

Once the sculpture was completed, Stan Winston Studios was able to mold from this life-size sculpture to create the 9000-pound animatronic T. rex, seen in the film.

Chronicle Collectibles has the rare opportunity to offer this maquette replica into the market. This item comes with a certificate of authenticity and is hand-painted. 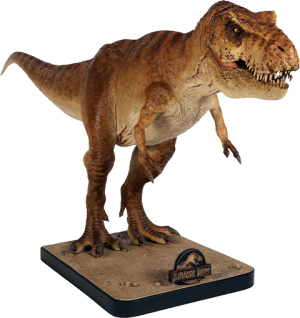