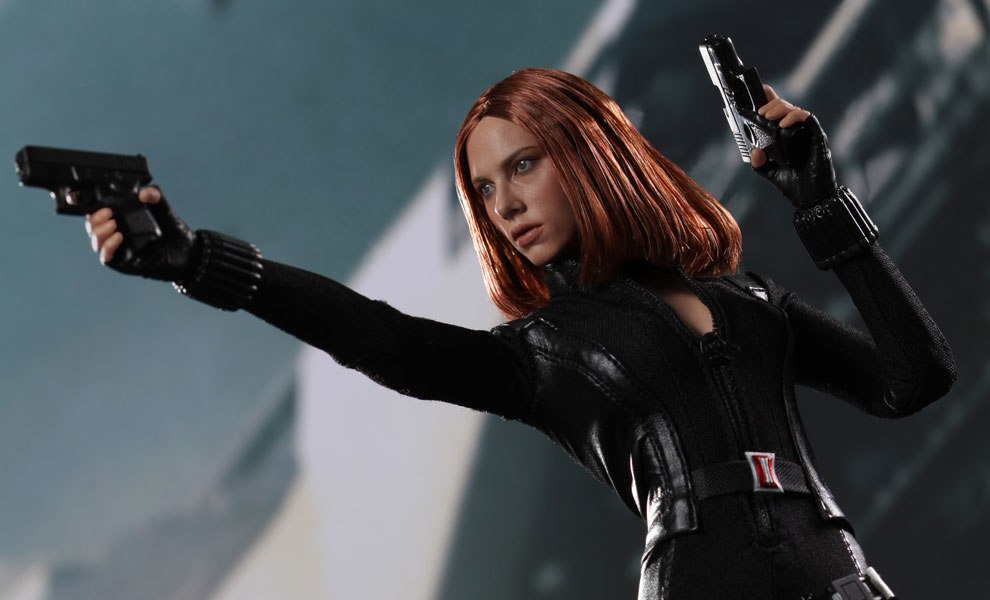 The world is a vulnerable place but we're the best qualified to defend it.

Sideshow Collectibles and Hot Toys are proud to present the Black Widow Sixth Scale Collectible Figure. The movie-accurate collectible is specially crafted based on the image of Scarlett Johansson as Black Widow in the film. Featuring a newly developed head sculpt with straight brownish-red real fabric hair, newly designed costume made with multiple materials, detailed weapons and accessories, you won't want to miss the chance to add this spy to your shelves!

This is my favorite figure from Hot Toys. It stands well without the stand. The detail in the head sculpt is amazing and the guns very detailed as well. I had no idea that the bolt slide back on the guns! In retrospect... i wish I bought two of this figure!

My favorite Black Widow and my wife's favorite Hot Toy.

A must have unfortunately for those of you who didn't buy. Better luck next time.

Looks even better in person. Paint apps on the face are spot on, as is the likeness to Scarlet Johansson. Many reviewers on Youtube have said the face is somewhat lacking when compared to the prototype, but I don't see it. I also don't see the likeness to Natalie Portman lol.

This was the figure that convinced me to take the leap into buying these toys. I have NOT been disappointed. This figure is so detailed and looks so much like Scarlett. Worth every penny!

When I was younger I used to have a few 12-inch Star Wars figures. I had Han Solo, Luke Skywalker, Chewbacca and Darth Vader. I would recreate scenes from the movies with them, but there was always something missing, there was never a Princess Leia doll that could go on an adventure with my figures.

Nowadays, there are a lot of great female action hero dolls that could go on these adventures with my Star Wars figures and one that I think will help a lot would be the Black Widow figure from Captain America: The Winter Soldier made by Hot Toys.

Right off the bat the packaging for the figure grabs your attention. Black Widow is standing there in a dominant pose with the black widow symbol in the background and the Captain America logo on the front. As with all Hot Toys the packaging is all about the detail, so when you are opening it you are opening a piece of art.

The figure is securely packaged in the box and is pretty easy to remove. She comes with 4 pairs of fists, two pistols, 2 pairs of Bite bracelets, a mobile phone and a display stand.

Black Widow has 28 points of articulation, so she can be posed in many different action positions. Due to the fabric of the costume, some movement is a little stiff, but it doesn't hamper posing the figure in certain fighting stances.

Just like the Iron Man Mark VII figure that had the awesome Robert Downey Jr. head sculpt, one of the highlights of this figure is the likeness to Scarlett Johansson. I am amazed at the resemblance of this figure. Again, Hot Toys figures are very well crafted and you basically get what you pay for.

Love this! Black Widow was my favorite part of Cap 2 and I knew when I saw this, I had to have her.