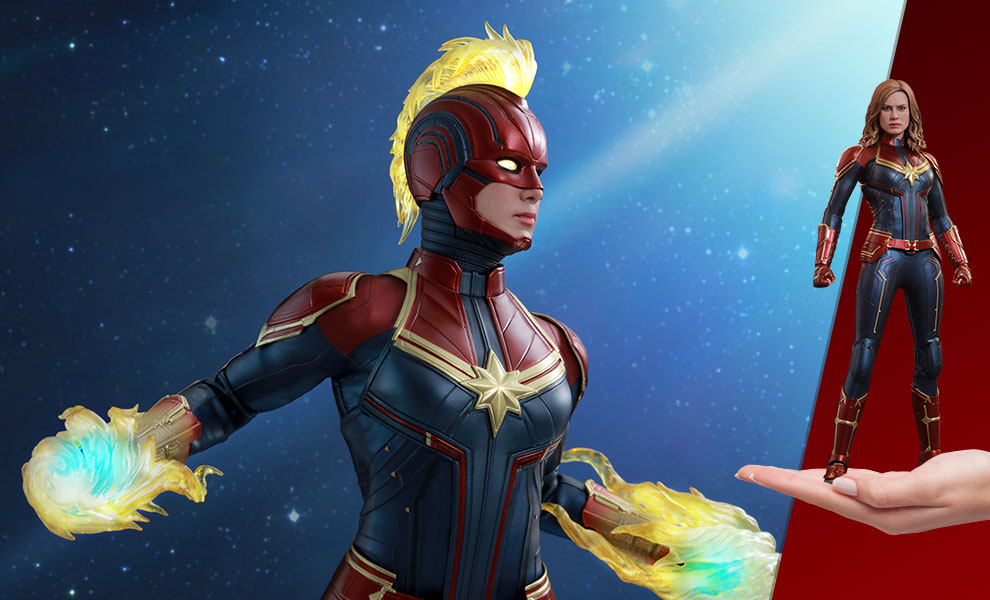 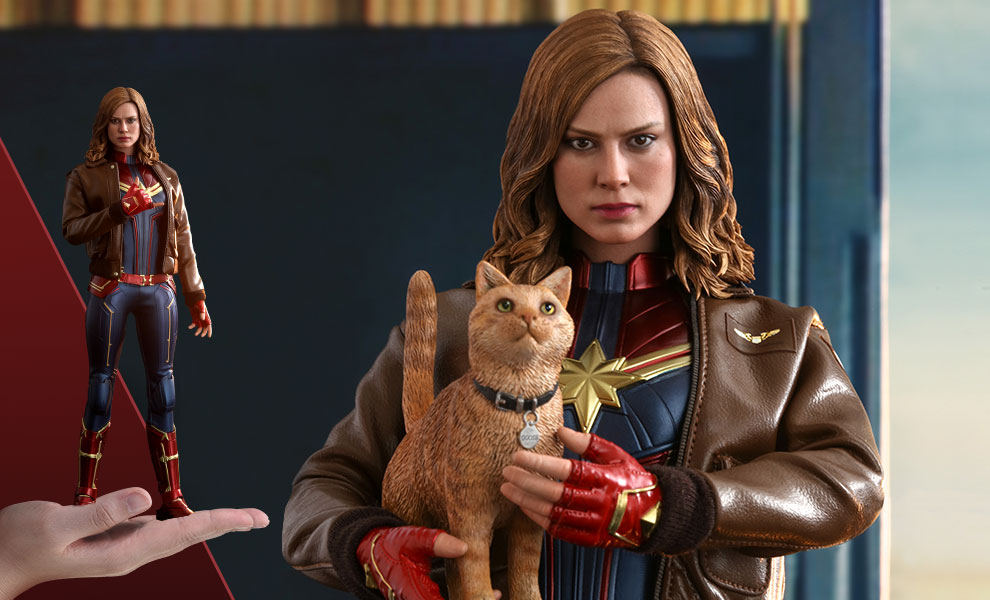 One of the most anticipated movies of 2019, Captain Marvel is getting ready for her close-up! The film follows an Earth-trained pilot Carol Danvers a.k.a. Captain Marvel, a powerful hero with strong sense of duty and honor. In the middle of a galactic war between two alien races, she protects the Earth from extraterrestrial threats with her unimaginable ability. Given immense popularity of the character, Hot Toys is proud to introduce Captain Marvel 1/6th scale collectible figure prior to the epic release.

The latest Captain Marvel collectible figure is a perfect way to show off your super powers!

While Captain Marvel is coming to theaters in less than a month, anticipation for this forthcoming installment in the Marvel Cinematic Universe is running exceptionally high. Being introduced at the post-credits scene of Avengers: Infinity War, Captain Marvel represents a key addition to the Earth’s mightiest heroes.

Today, Hot Toys is expanding Movie Masterpiece Series with the cosmic-powered hero Captain Marvel in 1/6th scale collectible figure which is eagerly awaited by millions of fans! Go on an epic adventure with Carol Danvers – better known as Captain Marvel – a former U.S. Air Force fighter pilot with the power to change the world.

Expertly crafted based on the appearance of Brie Larson as Carol Danvers/Captain Marvel in the movie, the highly-detailed collectible figure features two interchangeable head sculpts including a newly developed unmasked head sculpt with amazing likeness and a newly developed helmeted head sculpt with LED light-up function that accentuates Captain Marvel’s superpower, two pieces of classic Mohawk hair sculptures, a newly developed body equipped with LED light-up function on both sides of the forearms, a skillfully tailored costume in metallic red and blue with a gold star emblem on the chest, multiple energy-blasting effect accessories that are wearable on arms, and a movie-themed dynamic figure stand for aerial poses!

The Deluxe Version will exclusively include Goose the Cat, a delicate Flight Bomber jacket, and an extra pair of firing effect accessories to complete the style.

Pre-order Captain Marvel collectible figure now and discover what makes her a hero!

Was hesitant to get this at first. With the sale and free shipping I pulled the trigger and was not disappointed. With all the added accessories, there are so many poses to create with CM. Currently have her with the mohawk helmet, super power fists and floating!

5
Michael d. 5 star review
Was hesitant but ended up loving it
Verified Purchase

I wasn’t sure about getting this at first mainly because I wasn’t sold on the sculpted hair. But it really does look like Brie Larson to me. Definitely have mine posed with the bomber jacket. Just be careful when turning the head when the jacket is attached because the hair is sharp. Didn’t want to pose mine in a super dynamic pose cause the suit material looks like it could warp easily like a spider-man Hot Toy. But all the details and the effect parts make this a must have in your collection!

Like Nebula, was on the fence about this one. Any concerns were quickly dismissed upon its unboxing. Gorgeous to look at (love displaying with the bomber jacket). The suit material has me avoiding dramatic poses much in the same way with Spider-Man. The golds, reds, and blue look really nice as well. The light up features in the alternate head and arms are easy to activate and, at the risk of sounding repetitious, also look great. It is difficult to get in a good flying pose. This seems due to Captain Marvel's tiny waist and the large clamp on the display post.

It's better than expected. Have to admit, this Captain Marvel is one of the best I have seen period. Have never been disappointed with Sideshow Collectibles. First Class.

Each time I look at this figure, the details blow me away in amazement. I already have her Endgame version on pre-order. Well done Hot Toys.

She is an absolutely incredible figure! Since her arrival, I cannot wait to try and find more poses for it. The extras are also really nice and the detail is extraordinary. Bravo, Hot Toys.

It looks really like Brie; the figure is just beautiful! I do wish the hair was a little bit more blonde, but other than that, it's AMAZING!! Easy to pose and looks just fantastic next to my other figures. Can't wait for more!

This is my first Hot Toy purchase and I’m overwhelmed with excitement. The likeness to Brie Larson, and all the accessories to toy around with. I am beyond happy! I have already pre-ordered Captain Marvel: Endgame Hot Toy figurine.

An incredible action figure. The light up features are awesome. Hot Toys never disappoints and ensures accuracy down the the smallest detail. Well worth the wait.

This has been one of the most significant editions to my collection since Thanos!!! This figure stands out from many others even without the light up feature activated. This Captain Marvel is so versatile with how many looks you can pose her in. I definitely recommend the Deluxe Version for anyone who wants to add this beautiful figure to their collection. The addition of Goose and her bomber jacket is not something to pass up. Marvel Studios produced an amazing movie with “Captain Marvel” and Hot Toys matched it with an equally awesome figure. Higher, Further, Faster Baby!

Hot Toys you nailed it once again!!! Whoever is reading this review please take my advice and purchase the deluxe version of this figure. It comes with loads of accessories which allow for some amazing dynamic posses. The material used for the costume restricts articulation a little however you can still pull off some amazing posses. The head sculpt is a direct likeness to Brie Larson and the light up feature in the 2nd head sculpt is on point. This figure is definitely a must buy. Facts!!!!!!!