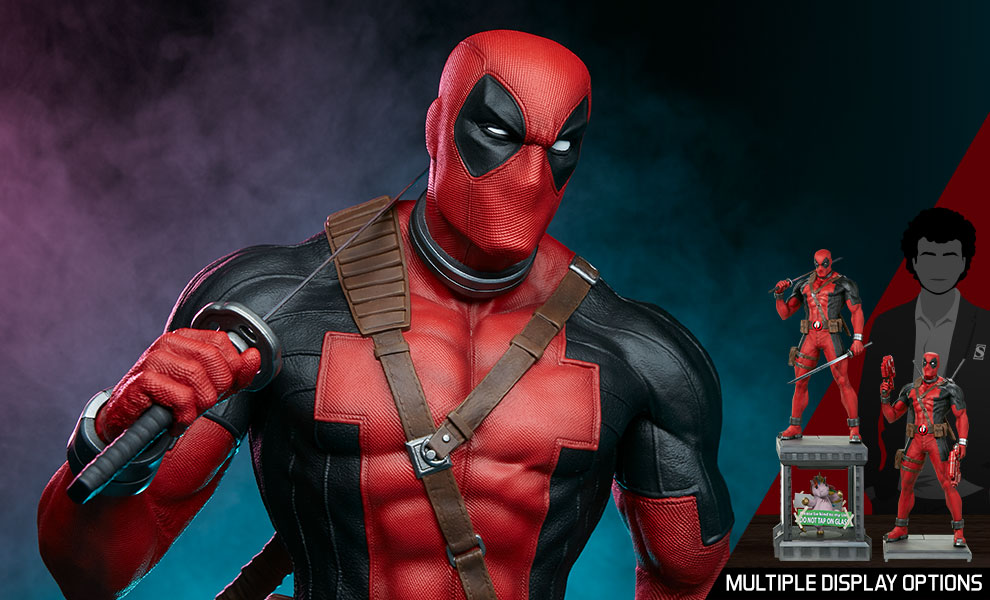 “I’d kill for some chimichangas up in here! I mean, I’ll kill you anyway, but even a handsome mutant like me needs breakfast!”

Sideshow and PCS present the Deadpool 1:3 Scale Statue, inspired by the insanity of Wade Wilson as he appears in the hit game Marvel Contest of Champions.

The Deadpool 1:3 Scale Statue comes with more display options than toppings at a taco truck so you can finally have a shining centerpiece to your not-so-secret Deadpool shrine. On the standard silver platform base, Deadpool measures 24” tall, ready to kick butt against other Champions in the arena. Some heroes battle for glory, or justice- but Wade Wilson’s motivation is none other than his favorite unicorn, Uni. When Deadpool stands guarding his ultra-mega-awesome unicorn showcase base, this Marvel collectible measures a whopping 38” tall and 12” wide. The full base includes a rotating Uni figure, light-up features, and removable cling signs to scare off any dastardly thieves.

The unbelievably detailed Deadpool 1:3 Scale Statue is fully sculpted to capture the Merc with a Mouth in all of his Marvel Gamerverse glory, complete with his iconic red and black costume. With two unique portraits and two different weapons loadouts, collectors can regenerate their Deadpool display with countless possibilities for configuration. The statue includes both a smirking, confident face and an intense action portrait, both masked for your viewing pleasure. Wade comes armed with a pair of his signature katanas and a pair of red blasters graffitied with fun reminders about which way they should be pointed- towards the bad guys, duh. The figure also includes a sheath on his back with removable sword hilts depending on which weapons you have displayed. An additional pair of cuff holders allows you to show off Deadpool’s (severed) extra hands inside the showcase- these guys thought of everything!

Don’t worry- we’ll give you a minute. That’s a lot of Wade Wilson to take in all at once. But when you’re done drooling, be sure to summon the Deadpool 1:3 Scale Statue by PCS to your team of Marvel collectibles.