Skip to main content
🍎 We're celebrating NYCC with HUGE Savings. Up to 30% off! 🍕
https://www.sideshow.com/collectibles/1028

Sideshow is proud to present the Iron Man Stealth Suit Statue, sneaking his way into the 1:5 scale Avengers Assemble collection.

Inspired by some of Marvel’s most iconic heroes, the Avengers Assemble collection captures the classic, colorful looks of Earth’s mightiest heroes as they leap into action.

Measuring 15.75” tall, Iron Man takes an action-packed stance as he prepares to assemble with his fellow Avengers. His cracked earth proximity base compliments his teammates’ bases and can be displayed alongside other Avengers to create a larger dynamic scene.

Tony Stark’s Stealth Suit armor trades the classic red and gold for something a little more covert. The suit has sleek blue paneling, with a lighter matte blue on the legs, arms, and faceplate. The resin statue features a light-up function in the hands, chest, and eyes. Activate stealth mode with the glowing red reactors for an exciting display option in your hall of armors.

Don’t miss your chance to add the Iron Man Stealth Suit Statue to your Marvel collection!

I received it today and carefully unwrap it, I am amazed at the details, lights and paint job. You guys rock!
Thank You SideShow !

Sideshow Collectibles brings us another Premium Slice of the Avengers Assemble Iron Man Trio. Bring on that Modern version and then I'll own the entire set.

The statue is as amazing in person as it is in the photos, more so even. Beautiful paint work, dynamic pose, awesome presence, it is just as expected. However, it is not without unexpected flaws.
The light up feature is cool, but it runs on batteries, so, unless you love swapping batteries and own a lifetime supply, it’s not good for much more than impressing people for a second or taking a photo. It’s a minor thing, but it could of had a plug-in option.
A slightly larger issue is that the light of the eyes bleeds through the side of head quite a lot. So, even taking photos with the lights on is kind of an impossibility.
Lastly, and most disappointing, the base is very wobbly. It doesn’t seem to be so bad that the piece would topple over, but it is far from stable, and enough to make me concerned. It could possibly be a flaw unique to my piece, but be prepared to shim the base to stabilize it.
All said, I wouldn’t say that these flaws are enough to make me regret buying the piece. They are relatively minor. The light issues are easily overlooked as this is kind of a novelty anyway. And the base issue is a pretty quick fix. Although, I would say that, for the price point, none of these design issues should have made it to final production, especially the unstable base problem.
Beyond that, the statue is every bit as impressive as presented. I am happy to own it.

Got home from work today and had this box waiting for me. Opened it up and baammm. A thing of Beauty. I ordered Capt from this collection. Love the blue and the fact that it lights up in red is different. The original ones just light up on the hands and chest. Only downside is the base is a little shaky. I had to put a piece of cardboard underneath it on the back part to even it out and hide it.

This is my first Sideshow piece and I am so happy with it! Looks great! 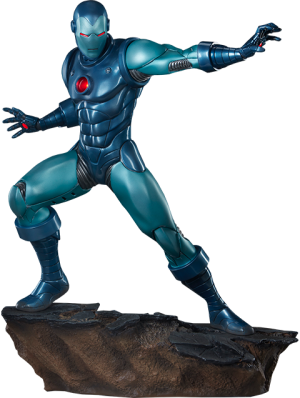