Skip to main content
Sideshow's Daily Deals are not to be missed!
https://www.sideshow.com/collectibles/10904

“My name is Gwen Stacy. I was bitten by a radioactive spider. And for the last two years, I’ve been the one and only Spider-Woman.” – Spider-Gwen

Gwen Stacy is a young woman from the New York City of an alternate universe where she was bitten by a radioactive spider instead of Peter Parker, and became her world’s Spider-Woman, known as Spider-Gwen. Being pulled into the home universe of Miles Morales, Gwen joined several other Spider-People for an interdimensional team-up.

Following the debut of Miles Morale Sixth Scale Collectible Figure inspired by the Spider-Man: Into the Spider-Verse movie, Sideshow and Hot Toys present the Spider-Gwen Sixth Scale Figure, coming from another dimension.

The Spider-Gwen figure is swinging her way into your Marvel collectibles display!

This is my first 1/6 scale figure from Hot Toys. I love it. It is a dream come true. The statue of Spider Ham is an excellent idea to recreated scenes of the movie.

Absolutely amazing fig.
The suit is lovingly, naturally flexing at the joints. The painting on the head, face & hair is outstanding. My only minor complaint would be the joints at the wrists are visible, but I'm really quibbling there.
Amazing piece of art, as expected from Sideshow and Hot Toys!

Spider-Gwen and Spider-Ham are both amazing! The articulation on Gwen is fantastic and can pull off just about any pose. The fabric on her suit reverts back perfectly after posing. The head sculpt looks just like the character straight out of the Spider-verse. Making this even better is it coming with Spider-Ham, who is a great companion piece. If you love the movie, this is a must get or just to add to your own Spider-verse! 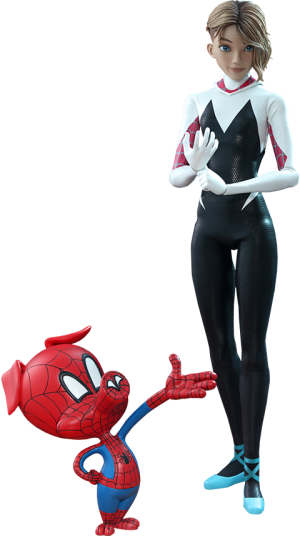