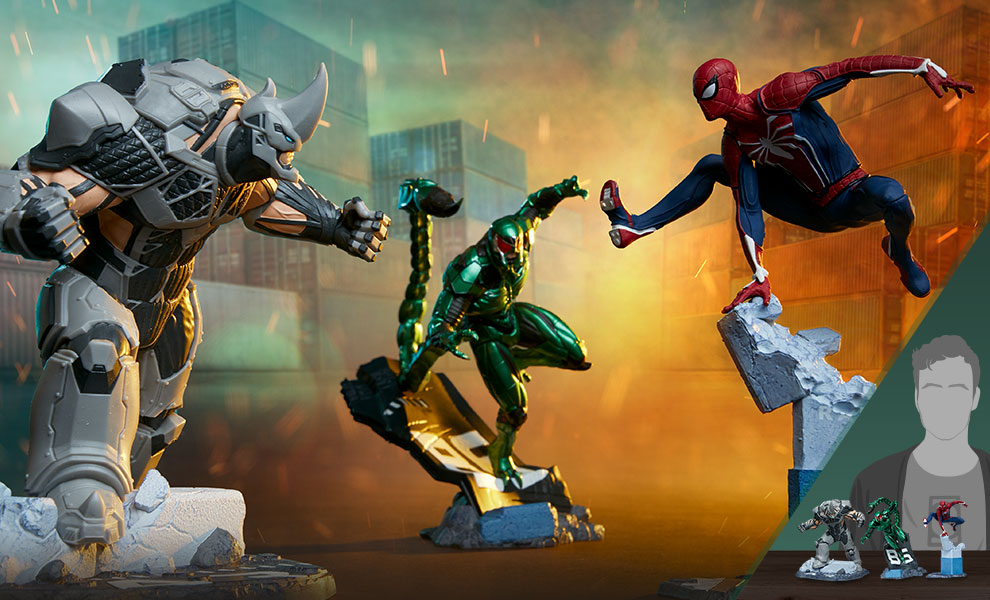 “Everyone just quietly go back into your cell and lock the door behind you! Okay?”

The Spider-Man/Rhino/Scorpion 1:12 Scale Statue Set features the friendly neighborhood hero up against two formidable foes, each with a proximity base inspired by the action-packed showdown in The Raft supermax prison.

Spider-Man measures 6.86” tall as he vaults over a destroyed concrete column that reads “Raft”. Costumed in his now-iconic Advanced Suit, Peter Parker strikes a dynamic pose facing down two of the Sinister Six.

Clad in a complex suit of grey armor, Aleksei Sytsevich is Rhino, the brutally strong battering-ram of the criminal operation. Rhino measures 6.9” tall, standing on top of rubble in his containment zone, flexing and ready to charge his nimble nemesis.

Finally, Mac Gargan is on the scene as Scorpion, a deadly mercenary protected by a metallic green suit fitted with a venomous stinger. Scorpion stands 7.16” tall from base to tail as he leaps from the wall in Raft block B6 to deliver a nasty dose of poison punishment to Spider-Man.

Each statue included in the three-pack set features a highly detailed sculpt and careful paint application to recreate all of the on-screen details from Marvel’s Spider-Man. Their dynamic poses complement one another to create a full battle scene when displayed together.

Bring home the battle and add the Spider-Man/Rhino/Scorpion 1:12 Scale Statue Set by PCS Collectibles to your shelf today.