Skip to main content
Sideshow's Daily Deals are not to be missed!
https://www.sideshow.com/collectibles/9416

Paleoart - Visions of the Prehistoric Past

It was 1830 when an English scientist named Henry De la Beche painted the first piece of paleoart, a dazzling, deliciously macabre vision of prehistoric reptiles battling underwater. Since then, artists the world over have conjured up visions of dinosaurs, woolly mammoths, cavemen, and other creatures, shaping our understanding of the primeval past through their exhilarating images.

In this unprecedented new book, writer Zoë Lescaze and artist Walton Ford present the astonishing history of paleoart from 1830 to 1990. These are not cave paintings produced thousands of years ago, but modern visions of prehistory: stunning paintings, prints, drawings, sculptures, mosaics, and murals that mingle scientific fact with unbridled fantasy. The collection provides an in-depth look at this neglected niche of art history and shows how the artists charged with imagining extinct creatures often projected their own aesthetic whims onto prehistory, rendering the primordial past with dashes of Romanticism, Impressionism, Japonisme, Fauvism, and Art Nouveau, among other influences.

With an incisive essay from Lescaze, a preface by Ford, four fold-outs, and dozens of details, the book showcases a stunning collection of artworks culled from major natural history museums, obscure archives, and private collections, and includes new photography of key works, including Charles R. Knight’s seminal paintings in Chicago and little-known masterpieces such as A. M. Belashov’s monumental mosaic in Moscow. From the fearsome to the fantastical, Paleoart is a celebration of prehistoric animals in art, and a novel chance to understand our favorite extinct beasts through an art historical lens.

The Editor and Author

Zoë Lescaze is a freelance writer based in New York City, where she was born and raised. She studied art history, studio art, and anthropology at Bowdoin College, and has worked as an archaeological illustrator in Cameroon. Currently an art critic and journalist, her writing has appeared in ARTnews, Artforum, and Even, among other print and online publications.

Walton Ford, born 1960, studied filmmaking at the Rhode Island School of Design, but soon realized he was a painter. For the last 20 years he has been creating large-scale narrative watercolors. His work has been widely exhibited, including solo shows at the Hamburger Bahnhof in Berlin and the Brooklyn Museum in New York.

Tabletop View — Paleoart - Visions of the Prehistoric Past Book 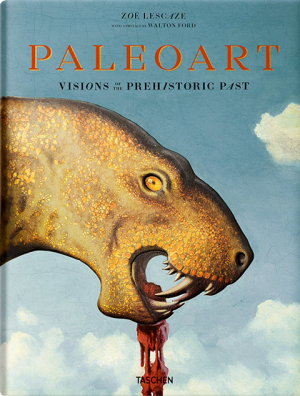