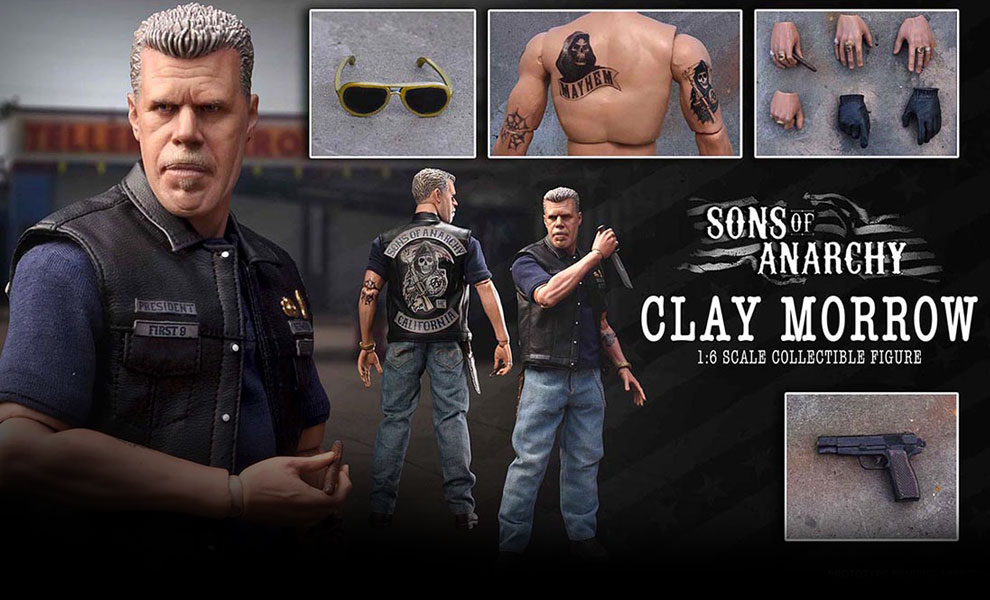 “On the fringe, blood and bullets are the rule of law, and if you’re a man with conviction, violence is inevitable.” - John Teller

One of FX’s all-time biggest hits, Sons of Anarchy ran for 7 seasons and 92 episodes, with a following that continues to grow, binge-watching new fan after binge-watching new fan. It tells the story of single father Jax Teller, who finds his loyalty to his outlaw motorcycle club, the Sons of Anarchy — AKA SAMCRO — tested by his growing unease with the group's lawlessness. This puts him in conflict with his own stepfather, club president Clay Morrow, who prefers things be done the Old School way. The violent way.

Pop Culture Shock Collectibles is proud to launch their inaugural line of high-end 1:6 scale figures with Jax and Clay, as memorably portrayed by Charlie Hunnam and Ron Perlman, respectively.

“Sons of Anarchy is a show about Family, yes,” said Pop Culture Shock founder, Jerry Macaluso, “but it’s also a uniquely American crime story, the likes of which we’d never seen before. These weren’t crews of Sicilians trying to earn their buttons, or inner city gangsters slinging their way to the top. These were men with a lifestyle devoted to their interpretation of Freedom, by whatever means necessary. I instantly fell in love with Kurt Sutter’s world, and when we started planning our 1/6 line, I knew who had to kick it off. I want people to look at them and smell oil and grease.”

The Clay Morrow Sixth Scale Figure features an authentic likeness, tailored fabric clothes, interchangeable hands and trademark accessories Whether perched on a shelf or sealed in a display case, the gun-running boys of Charming will make the rest of your collection sleep with one eye open.