Skip to main content
Daily Deals Up to 50% OFF 👍
https://www.sideshow.com/collectibles/9227

Expected to Ship: 1-2 weeks after order is placed

This deluxe book showcases the unique costumes of the Star Trek saga, taking in fifty years of iconic and hugely influential designs. Drawing on the entire franchise, including all twelve films and six TV series, Star Trek: Costumes explores the creation of some of the most memorable garb in the galaxy, telling the complete story of how Star Trek's outlandishly chic wardrobe has been expanded in increasingly thrilling ways throughout the years.

From the classic Starfleet uniforms and daringly provocative outfits of The Original Series to flowing Vulcan robes, flamboyant Ferengi fashions, and formidable Klingon wedding attire, Star Trek: Costumes explores how these designs have played a key role in transporting fans to distant worlds and alien cultures over the last five decades.

Filled with exclusive photography, stills from the saga, rare concept art, and other striking visuals, Star Trek: Costumes also focuses on the talented individuals who have brought the Star Trek universe to life, including original costume designer William Ware Theiss and his successors, Robert Fletcher, Robert Blackman, and, most recently, Michael Kaplan.

Featuring extensive information on the creation of each featured costume, with insight and anecdotes from interviewees including Blackman, Kaplan, J.J. Abrams, LeVar Burton, Jonathan Frakes, and Ronald D. Moore, this book is a comprehensive and captivating celebration of the incredible artistry that has made Star Trek's costumes as innovative and imaginative as its futuristic technologies.

Also featuring an introduction by Robert Blackman, Star Trek: Costumes is the ultimate way to experience the incredible fashions of the Final Frontier of any Star Trek Collectible. 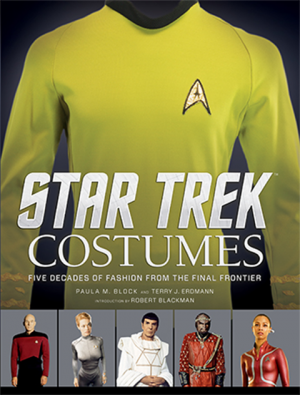