Skip to main content
We've got the deals! Up to 40% Today Only!
https://www.sideshow.com/collectibles/12905

“I'm a simple man making his way through the galaxy. Like my father before me.”

Star Wars™ fans were overjoyed to witness the return of Boba Fett, one of the most feared characters in the Star Wars galaxy! Thought to have met his demise in the terrifying Sarlacc pit on Tatooine™, Boba Fett is striking back. In exchange for his legacy armor from the possession of the Mandalorian, Boba Fett ensured the Child’s safety and proved to be a formidable ally in Din Djarin’s™ rescue of the mysterious alien foundling.

Sideshow and Hot Toys are elated to expand the Star Wars collectible series with the Boba Fett (Deluxe Version) Sixth Scale Collectible Set, featuring the appearance of the formidable bounty hunter in a black robe and in his iconic armor!

The Boba Fett collectible figure set (Deluxe Version) from The Mandalorian will be a legendary enhancement to any Star Wars figure display!

“I don't want your armor. I want my armor that you got from Cobb Vanth™ back on Tatooine™. It belongs to me.”

In the latest season of The Mandalorian, Star Wars fans were ecstatic to see the return of their beloved bounty hunter Boba Fett! Having survived the ordeal of the deadly Sarlacc pit on Tatooine, Boba Fett had set his sight to retrieve his legacy armor from the Mandalorian.

The Mandalorian collectible series from Hot Toys is expanding and we are thrilled to introduce the Boba Fett Sixth Scale Collectible Figure from the acclaimed Lucasfilm series!

This Boba Fett collectible figure will be destined to become an iconic piece in your Star Wars figure display!

These figures are beyond awesome. The clothing is spot on to scale with weight enough to hang convincingly. The accessories have superb paint applications. The interior of the helmet is one of the best items Hot Toys have produced.
Buy them or regret missing out.

Uh.... these things are unbelievable! If you can afford it, do it! The pictures don't do the finished product a bit of justice!

Such an awesome representation of both depictions of Boba that we saw in The Mandolorian. The robes are a really good quality. The set as a whole is an impressive display. Happy to have them both in the collection!

Amazing set :) Apart from my love for the character of Fett, these are figures for every self-respecting collector :) Excellent quality, appearance, a multitude of details put Hot Toys figures at the highest level. I definitely recommend :)

its just perfect even without the other set of figure its perfect. 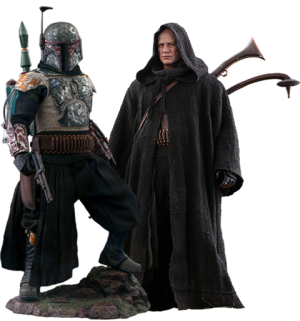