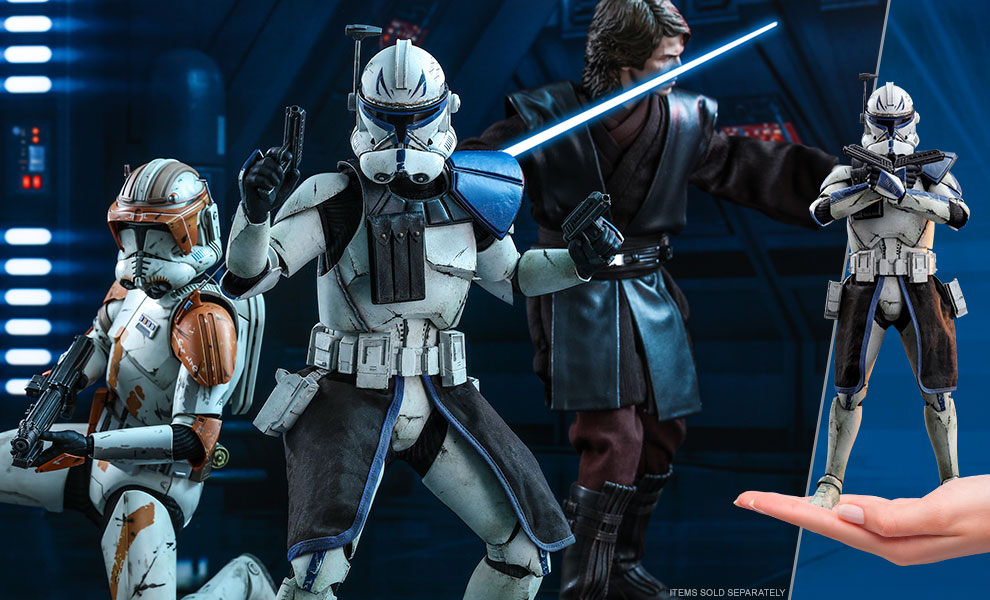 Clone Captain Rex served the Republic during the Clone Wars, often taking orders from Anakin Skywalker and Ahsoka Tano. He viewed military service as an honor, and he always completed his mission. Fond of using two blaster pistols at the same time, Rex customized his armor with distinctive blue markings. His loyalty to the Republic and his Jedi Generals was absolute, but even this dedicated veteran soldier found himself plagued by doubts as the Clone Wars claimed more lives and brought ruin to more worlds.

The highly-accurate collectible figure is specially crafted based on the appearance of Clone Captain Rex in the acclaimed animation series featuring meticulously crafted and finely detailed recreation of Rex’s distinctive Clone Trooper armor and helmet, interchangeable head sculpt with amazing likeness, skillfully applied weathering effects, his signature dual blaster pistols as well as a blaster rifle, a detachable jetpack, an Ahsoka’s Clone Trooper helmet, and a figure base!

Captain Rex has finally arrived and he is incredible. The detailing made me see things that make the character unique that I never even noticed before. He is a must-have to accompany Ahsoka and Obi-Wan in a detolf.

Hot Toys Blow Another Clone Trooper out of the Water, with a few small issues that keep it from being a perfect 5/5.
First Off this is an Amazing Figure and a must have for any Clone Wars Fan, Captain Rex is a Great Character and has a Great Figure to Match.
The Detail and Weather on him is Great but also where some of my issues come from. The shoulder pauldron is incorrect with the blue paint going over the whole left side when it should only be on the raised parts, which looks like a factory mistake but its in the promo photos, and makes it look cheap. As Well as the Kama has zero weathering, with is a huge clash with the extremely weathered armor of Rex, a simple air brushing would have gone a long way and on a $255 figure we should expect that. On a more personal level Captain Rex's armors greenish tint looks off, I know its correct to the show and does help Rex pop out of the shelf next to the other Clone Troopers, but the greenish tint just gives me algae vibes not old armor thats been through countless battles.
The Armor itself is just Amazingly done and I love how Well Hot Toys did bring an Animated Design in to the Real World, Rex's spliced together Phase 1 and 2 helmet is a literal work of art and the paint details on the weld marks are perfectly done, so too are the weld marks on the chest plate.
And the Rex Head Sculpt is uncanny how Great it is and its a shame you have to pick between the work of art helmet and the too realistic head sculpt.
The accessories Rex's comes with are good but I feel for the price tag he has a little lacking, especially when you compare it to the 501st Deluxe, I would have so much rather had a Phase 1 Rex Helmet vs the 332nd we got, yeah it wouldn't have been accurate with this armor but neither was the 501st Phase 1 helmet.
As Critical as I've been on this figure its only because its so close to being perfect and Rex is such a beloved character he deserves the best, and even with the cons its still a must buy

Absolutely fantastic piece! You definitely get what you pay for. It will be an incredible companion piece to the Ahsoka figure.

Such an amazing figure its great for photography. cant wait to do more photos with Hot Toys clone's