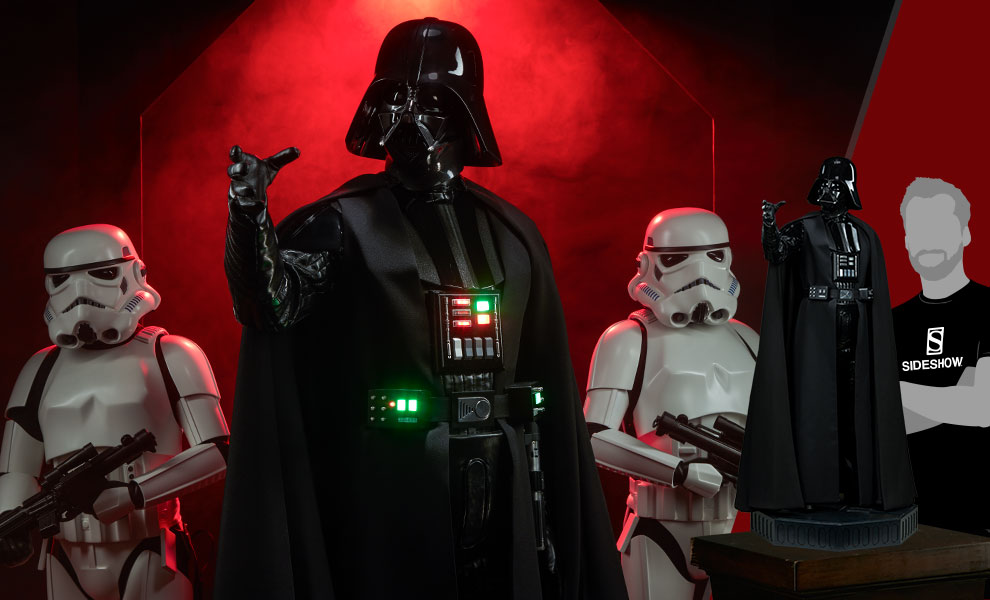 About This Legendary Scale™ Figure

“I find your lack of faith disturbing.”
Sideshow, in partnership with Legacy Effects, is excited to present the Darth Vader Legendary Scale™ Figure.  This limited edition Star Wars collectible statue commands attention as the imposing Sith Lord shows you the true power of the Dark Side.
Standing over 46" tall, this large Darth Vader figure strikes a menacing pose, using the Force to crush the hope of the Rebellion and silence his dissenters with an outstretched hand.  This 1:2 scale figure is rich with screen accurate details from his appearance in Episode IV: A New Hope.
Along with his detailed helmet, Darth Vader comes outfitted in his iconic black fabric costume, and his screen accurate chest box and belt come with light-up features.  Power them up and experience the grandeur of bringing a piece of the epic Star Wars legacy into your home.
The Darth Vader Legendary Scale™ Figure will make an impressive…most impressive addition to any Star Wars collection.  Rule the galaxy and add him to your collection today!

This thing is awesome! I love the realism and attention to detail that went into this design. This is my first big piece from SSC. I will be ordering from them again! Thank you for taking great care of my product. The Force is definitely strong with this piece!

I am VERY happy to have this in my home. I also have the premium format "Lord of the Sith" (which I would give an infinitely excellent rating) and wondered about spending so much for something so similar, but its a completely different feeling. He comes to life in this and the details are so well articulated its captivating. I've spent literally an hour just staring and marveling. My girlfriend ran to the other side of the room when she noticed him and said "I'm not coming over anymore; he'll give me nightmares". No hyperbole.

My only issue is his legs. If you apply his "over robe" the way it shows in the pictures (and the instructions suggest) they are mostly covered, but I did not find that appealing and have placed it under his mantle and pulled it back a bit to show the legs and boots. In this way the legs show that they are rather scrawny and out of scale compared to the compelling presentation of every other facet of this piece. Maybe they were an afterthought because the artists assumed they would be covered. Whatever the reason I do wish they were more substantial and cohesive with the rest of the art.

That issue is considerably mitigated by how strongly your focus is pulled to his presence. All the other details that are done so well in such a large format as to make it, for me, with how I feel about it, ignore-able, but I did feel it should be mentioned considering the way the photography was done and the price.