Skip to main content
Sideshow's Daily Deals are not to be missed!
https://www.sideshow.com/collectibles/1775

"Enough of this! Vader, release him.” - Grand Moff Tarkin

In charge of the Empire’s ultimate weapon, the Death Star, Grand Moff Tarkin is determined to crush the rebellion with one swift stroke by using the moon-sized space station’s planet-killing superlaser and strike fear across the galaxy. But with the stolen data of the Death Star in the Rebel’s hands, Darth Vader is tasked to recover the plans to eliminate the chances of the Rebellion stopping the technological terror and rule the entire galaxy.

Meticulously created based on the appearance of Grand Moff Tarkin in Star Wars: Episode IV A New Hope, the figure features a newly developed head sculpt with a phenomenal likeness, a finely tailored Imperial uniform, Grand Moff Tarkin’s high back chair, and a specially designed Death Star themed figure base.

The new Darth Vader sixth scale collectible figure is specially crafted based on the appearance of the Sith Lord in the film featuring newly redesigned gloves, a sophisticatedly-crafted Darth Vader armor and helmet, skillfully tailored suit, LED-lighted lightsaber, an Interrogator Droid, and a specially designed Death Star themed figure base.

This special Grand Moff Tarkin and Darth Vader collectible set will definitely be a great cinematic masterpiece to add to your Star Wars collection!

Wow, I have no other word that comes to mind when I see these two figures side by side. I have been waiting for a Tarkin figure for a long time and Hot Toys really really outdone themselves with him... and having a Vader/Tarkin double pack, WOW. Vader look awesome as well !!!

THIS is what a true Star Wars fan has long waited for. If you're an OT fan, this is the set you want to have. The Tarkin sculpt is STUNNINGLY life-like. Fantastic in every way. As for Vader, if you haven't grabbed one yet, grab this one. You won't be disappointed!

By far the best rendition I've ever seen!!! The sculpt on Tarkin is legendary. What comes with this set makes it well worth the price, and Vader....... What else needs to be said about Vader. Truly an amazing set!!! Hot toys you have knocked it out of this known galaxy.

Vader & Tarkin together is a dream come true! They nailed Tarkin likenes making it the ultimate tribute to the late great Peter Cushing. This is also my very first Vader and man Im glad I waited... This is the Sith Lord version to own from the A New Hope 1977 Classic! 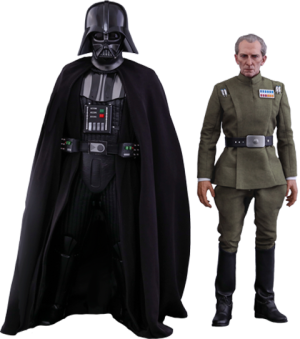