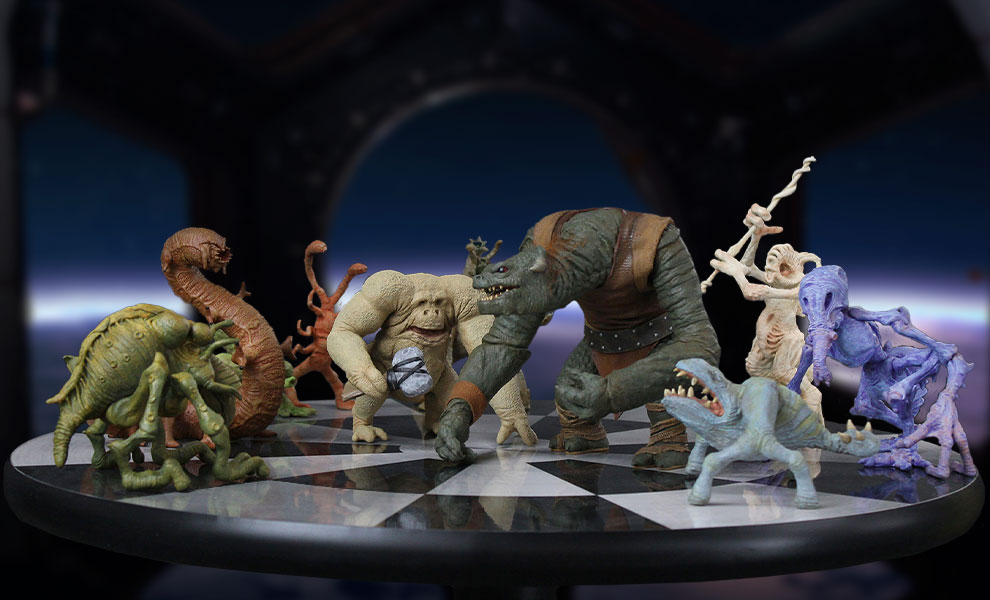 This incredible, extremely limited edition includes meticulously developed prop replicas of the original stop-motion puppets used in filming the Dejarik™ holochess sequences in the Star Wars™ Saga. Only 77 of this edition will be made, each with 10 hand-painted, static resin replicas that are 1:1 scale to the props, with lineage to those original puppets!

Regal Robot replicas were prototyped using the digital files that Phil Tippett’s team created in 2015, when they used 3D scanning and photogrammetry of original props used in Star Wars: A New Hope™ to accurately recreate the wildly imaginative creatures he and Jon Berg hand-sculpted in 1977.

Using these files, along with reference provided by Lucasfilm and never-before-seen photos which Phil had saved from 1977, our artists created incredibly detailed replicas, taking great care to maintain the integrity and lineage of each. Each piece of this edition will be crafted in the U.S.A..

The plaques for this deluxe set have been signed by the three legendary creators involved in the production of the original stop-motion Dejarik sequence: creature creators/animators Phil Tippett and Jon Berg, and miniature effects cinematographer, Dennis Muren.

This set also includes exclusive replicas of Scrimp™ and Bulbous™, which were characters created for the original Star Wars but not used in 1977. They would eventually be brought back for Solo: A Star Wars Story™