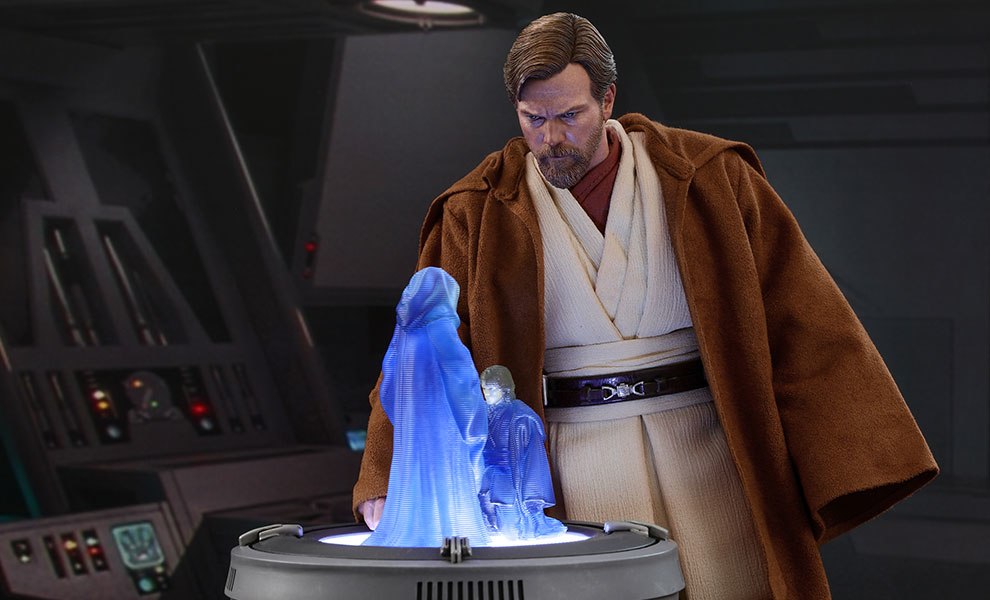 "Bring balance to the force… not leave it in darkness!"

Legendary Jedi Master, Obi-Wan Kenobi is fans’ beloved character in the Star Wars galaxy! Gifted in the ways of the Force, he fought alongside Qui-Gon Jinn, trained Anakin Skywalker, and served as a general in the Republic Army during the Clone Wars. In Star War Episode III: Revenge of the Sith, fans finally witness the conflict and climatic battle between Obi-Wan and Anakin who had turned to the Dark Side!

Sophisticatedly crafted based on the appearance of Obi-Wan Kenobi in the film, the 1/6th scale collectible Star Wars figure features a newly developed head sculpt with a stunning likeness, a skillfully tailored Jedi robe and tunic, an LED light-up lightsaber, severed battle droid parts and a specially designed figure base with interchangeable graphic cards!

Moreover, this Deluxe Version will exclusively include hologram figures of Darth Sidious and Anakin with LED light-up table and a baby Luke Skywalker!

*** Exclusive to the Deluxe Version

Love that I could add this to my collection.

Great looking figure. Hot Toys does an excellent job of producing Star Wars figures. This one was delayed a few times before shipping out. It was well worth the wait. All the extras is just a great bonus. To the Star Wars fans: Get this figure. You wont regret it.

This is easily one of the best Hot Toys/Sideshow figures ever. The detail is remarkable - it's so authentic and lovingly crafted. I definitely recommend the deluxe version. Baby Luke will make you smile (and even tug at your heartstrings), and the holograms are surprisingly true to the imagery of Revenge of the Sith - they have a distorted texture that really wowed me. A must-have for Obi-Wan fans, but especially anyone who already has the ROS Anakin. They make a perfect pair. Thank you so much for creating this!

I've had this figure for a while now and it has quickly become my favorite 1/6 figure.