Skip to main content
🎉 Up to 50% off deal Extended! Act fast!
https://www.sideshow.com/collectibles/16665

Ralph McQuarrie is the most iconic artist in the history of Star Wars. He worked hand-in-hand with George Lucas to help establish the saga’s visual aesthetic, its inimitable look and feel. Beyond designing Darth Vader, C-3PO, and R2-D2, McQuarrie produced hundreds of pieces of Star Wars artwork, including conceptual paintings, costume designs, storyboards, and matte paintings, as well as posters, book covers, and album covers—even Lucasfilm’s annual holiday cards—all rescanned and rephotographed for this Star Wars book. In Star Wars Art: Ralph McQuarrie, readers will find the most definitive collection of the artist’s Star Wars work ever assembled, including hundreds of never-before-seen illustrations. Rare unpublished interviews, as well as recollections from McQuarrie’s colleagues and friends, complement and contextualize the art. Star Wars Art: Ralph McQuarrie is a comprehensive tribute to cinema’s most beloved and influential concept artist.

“The galaxy far, far away will seem a lot closer once you have this collection on your coffee table.”

Brandon Alinger is the chief operations officer of the Los Angeles branch of Prop Store and the author of Star Wars Costumes: The Original Trilogy. Wade Lageose is a graphic designer/artist who specializes in the entertainment field. David Mandel is an Emmy– and Writers Guild Award-winning writer for Saturday Night Live (1992–95), Seinfeld, and Curb Your Enthusiasm. He currently serves as executive producer and showrunner of HBO’s Veep. 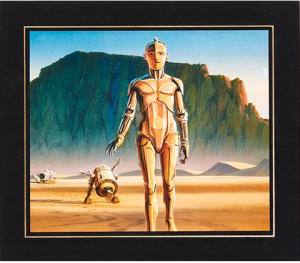