BOGO Qualified! Act fast, this item qualifies for Buy One Get One 50% Off*

The surprise debut of the Child, a mysterious alien pursued by bounty hunters on behalf of Imperial interests, was revealed in the premiere episode of The Mandalorian series and instantly became one of the favorite characters among many Star Wars fans around the world!

Sideshow and Hot Toys present the astonishingly detailed life-size collectible figure of the Child AKA Grogu, who fans affectionately refer to as “Baby Yoda.”

The Force is strong with this one! Embrace the adorableness of the Child. The hyper-realistic and articulated Grogu collectible figure is meticulously crafted based on the appearance of the Child in The Mandalorian. Standing at approximately 36cm tall, this Star Wars figure features an amazing likeness with riveting fine details, 2 pairs of interchangeable ears, movable head and arms, an articulated jaw design, skillfully tailored outfit, a silver knob from the Razor Crest™ ship that the young alien loves to hold, a Mythosaur emblem necklace, and a variety of interchangeable hands to pose or hold the items allowing fans to recreate iconic moments from the highly acclaimed live-action series!

Hot Toys’ The Child Life-Size figure is an incredible Star Wars collectible with stunning details and fascinating features. It will surely be a delightful asset to add to any Star Wars fans’ collection! Take care of this little one.

Great figure and too cute. Only problem is he gets into a lot of mischief lol

This little being is truly adorable; He has just joined in my showcase, his other him (The Child Life-Size of Sideshow) I do not get tired of contemplating them, they make me crack. Regarding the general aspect of the work, I can say that all the details are perfectly realized, so bravo to those who worked on this project.

So incredibly adorable and screen accurate. I have decided to not mess with the articulated jaw and haven’t had any issues. I would highly recommend this to someone who loves Grogu. :) and

5
Mark C. 5 star review
Is This THE Child You're Looking For?
Verified Purchase

I had done lots of research and watched quite a few video reviews on this Grogu. I was aware that the early release had issues on the chin tearing at the bottom if you leave the mouth closed for too long. I have also heard there is a lack of posability and that it does not look like the one from the show. For two months I have gone back and forth on looking at this. I wasn't sure if he'd be worth the price...until it was the day after Halloween there was an awesome 25% discount on this Grogu, and I decided to buy him. When he arrived at my location two days later, and I took Grogu out of the box...I was speechless! They say that pictures don't do justice, and that you have to see it in person to really appreciate it...this is one of those times. No matter how good of a camera you have for taking photos/video, nothing can completely replace seeing such a masterpiece right in front of your very own eyes. Grogu looks every bit like he does in the show, and while to some it may not be 100% accurate, this is as close as you are going to get. I wasn't disappointed though. Some people have complained about the seam lines around where you can interchange the ears, but seeing it in front of me, I am hardly bothered by it. To me, it just looks like another pair of wrinkles that's part of his head. I moved the mouth joint for a very short time, and the material seems to be strong and firm than what I've seen the first time around. Mine cannot close his mouth entirely, but then again, I would not want to anyways. He looks perfect with his mouth slightly open. Articulation is good enough. Just make sure not to force any of the joints. Some have complained his hands are too big, but they look proportionate to me compared to the rest of his overall appearance. Every time I look at him and pick him up, he makes me smile and feel joyful. I love this Grogu so much! Highly recommend this if you are looking for a definitive version of everyone's favorite child.

This little one is so realistic it’s heartbreaking he’s not alive. The figure is so well made: the sculpt and paintwork are phenomenal and the cloth goods are fantastic. However the articulation is limited, which is disappointing. The figure feels slightly overpriced for what you receive, however I love the final product. Definitely don’t regret buying this little guy 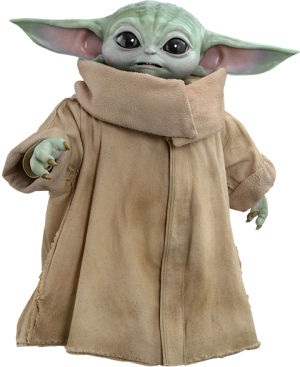