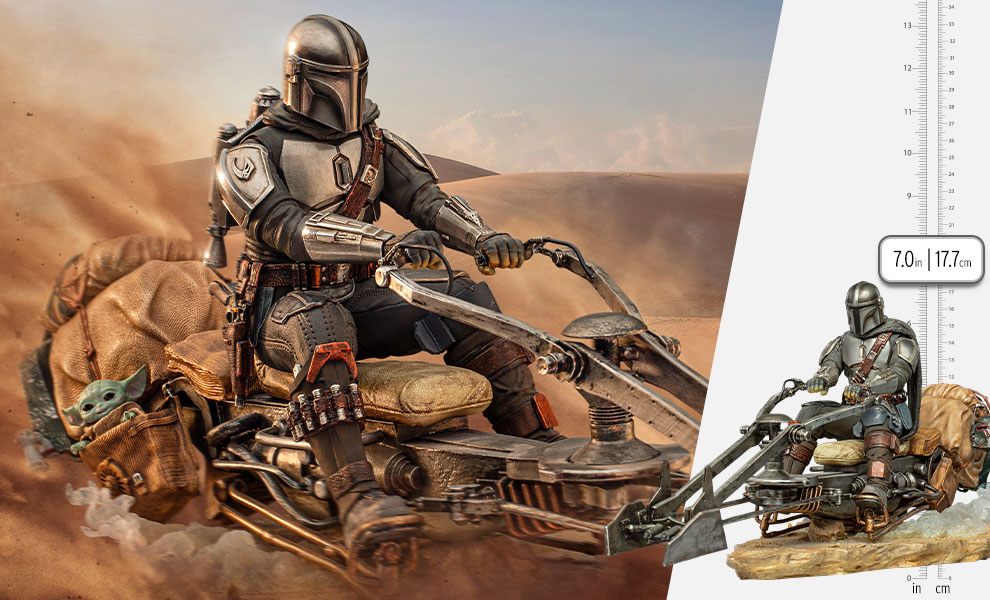 The Mandalorian on Speederbike Deluxe 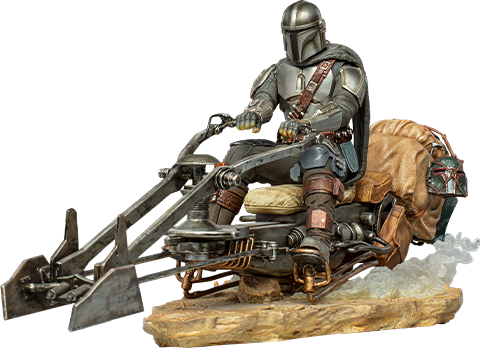 Sideshow and Iron Studios are proud to announce the latest from the Art Scale 1:10 line - The Mandalorian on Speederbike Deluxe! This Star Wars Collectible Art Scale Statue is limited edition and comes with a detailed hand-painted base.

Riding a speeder bike, thus raising a cloud of dust, the Mandalorian bounty hunter crosses the arid desert of the planet Tatooine carrying in his luggage the recovered armor, helmet, and jetpack, that once belonged to another legendary hunter, the feared and iconic Boba Fett. They are attached to the outer left and rear parts of the vehicle. Inside a bag, attached to the back of the Speeder, is little Grogu (Baby Yoda), the child that Mando protects and who is apparently enjoying the high speed. Faithfully portrayed on both the speeder bike and the characters, Iron Studios presents its statue "The Mandalorian on Speederbike Deluxe Art Scale 1:10 - The Mandalorian", inspired by a scene from Chapter 09: The Marshal, from the first season of The Mandalorian series.

With the mission to deliver Grogu to his people, the Jedi, the bounty hunter, Din Djarin, also known as Mando, goes on a search for other Mandalorians, as he believes they will be able to help him. In the small town of Mos Pelgo, on Tatooine, he meets the local sheriff named Cobb Vanth. The sheriff wears the legendary Boba Fett's armor, purchased from Jawas collectors in the desert, and in exchange for Vanth's armor, Mando agrees to help kill a Krayt dragon, an underground creature that attacks the local population. After killing the monster and retrieving Fett's armor, Din Djarin resumes his mission.

Another emblematic statue in Deluxe format from The Mandalorian line by Iron Studios and already available for Pre-Order, featuring the two most beloved protagonists of the series, in one of the most emblematic vehicles of the Star Wars saga, adding to the collection that brings other pieces already revealed and derived from the most striking scenes, with its main characters from a galaxy far, far away.

The The Mandalorian on Speederbike Deluxe 1:10 Statue features: