Skip to main content
🍎 We're celebrating NYCC with HUGE Savings. Up to 30% off! 🍕
https://www.sideshow.com/collectibles/833

The Satsui no Hado has long been a cautionary tale in the Street Fighter franchise, a destructive form of Ki that exploits the baser aspects of humanity, corrupting even the purest of souls. Goutetsu taught it to his student Akuma, who embraced it, and Gouken, who recognized it's risk, refusing to train his own disciples.

In Story Mode, we've seen Ryu flashback to his fateful fight with Sagat, how his "cheap win" still torments him. Eyes literally red with anger, he unleashed a Metsu Shoryuken so devastating it scarred Sagat's chest. Disfiguring an opponent was anguishing enough, but what truly frightened and shamed Ryu is how much feeling that power excited him.

Sideshow and Pop Culture Shock Collectibles are proud to present their very first independent 1:4 scale Evil Ryu statue, a unique sculpt created from the actual CG model, and not just a palette swap.

This is Ryu stained with the blood of death, Supreme Master of the Fist, brutal and murderous, looking for the one that can defeat him. The fine artists at Pop Culture Shock have perfectly captured his menace and power, perfecting all his signature elements, from his animalistic fangs to his Akuma-like spikey inferno of hair. And of course, no Evil Ryu would be complete without the gaping crater to hell burned into his chest, or that scar on his back that looks ominously like a "Heaven" kanji.

This high-quality polystone collectible features a tailored cloth costume, LEDs in the eyes, chest and back and two (2) portraits, evil grin, and scream.

This statue is amazing with every detail from the paint to shade the skin to the veins. The detail in the fabric with attention to the rips and tears. His stance and even his glowing eyes, chest, and back make this piece a must have for any collector out there. This was my first from PCS and I have ordered 3 others. Evil Ryu was definitely brought to life on this 1/4 scale statue. 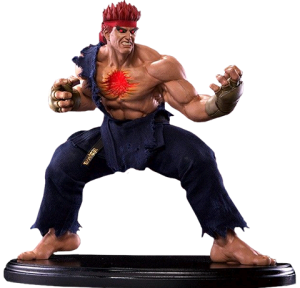