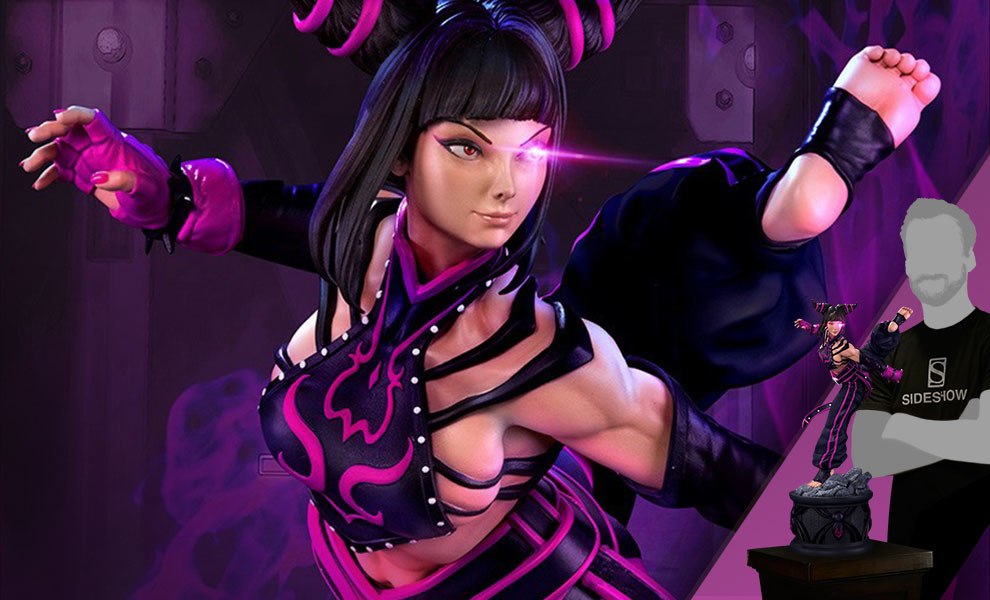 Get it NOW!
Calculating Payments...
Layaway Plan
Buy with
Limit of 1 per person.

The first Korean fighter and Taekwondo practitioner in the main series, Juri Han’s explosive debut in Street Fighter IV made her an instant fan favorite, especially amongst competitive players who enjoy toying with their opponents. Like the character herself, in the hands of a tournament pro, she is an offensive force, capable of shutting down challengers before they can even get started.

“What makes Juri such a great character is that she’s there for Juri. She has no time for B.S., and hates the bad guys and good guys in equal measure,” says Pop Culture Shock founder Jerry Macaluso. “Ono-san refused to make her another girl scout, he wanted ‘a really evil chick,’ and that’s what we got, a trickster. She loves to clown and ridicule Chun-Li and holds Cammy and Bison in the same contempt. In fact, she might just be the most sensible person in the games, happy to let everyone else duke it out so she can take over while they’re distracted. But somehow as wicked as she is, you can’t help but love her. We’re all flies in Juri’s web.”

Dressed in her trademark hot pink dudou and striped dobok leggings, Pop Culture Shock Collectibles has recreated Juri’s sultry form down to the last detail, from the ribbons that fasten her hair into horns and studs on her belt, to the spiked bracelets on her wrists and wraps protecting her mani/pedi. The 8 straps on her torso barely seem to restrain her bodice against the forces of gravity, slithering across her shoulders and down her back to form her spider emblem, which has been incorporated into a resplendent pedestal base. Standing a whopping 23” tall, she demands the spotlight, with a vibrancy that will make her pop out of any collection, a piece that makes itself known.