Skip to main content
Sideshow's Daily Deals are not to be missed!
https://www.sideshow.com/collectibles/9444

The Making of Stanley Kubrick's 2001

It’s the movie that revolutionized science fiction and the art of cinema, that transformed the way we think about film with its special effects, narrative style, philosophical importance, and unusual musical choices. Now, fifty years after its conception, TASCHEN presents the most exhaustive publication ever devoted to 2OO1: A Space Odyssey. Limited to 1,500 copies, this landmark edition has been made in exclusive collaboration with both the Kubrick Estate and Warner Bros.

Get closer than ever to this movie that changed the movies. Conceived by the same designers behind our instant collectible Stanley Kubrick’s Napoleon: The Greatest Movie Never Made, this richly illustrated four-volume set features hundreds of previously unpublished documents and photographs, as well as personal testimony from Kubrick’s co-screenwriter Arthur C. Clarke. All hardcover volumes are presented in a sleek metal slipcase inspired by the famous monolith, and come boxed with exclusive cover art from Wayne Haag.

Piers Bizony is a science and technology writer. His publications include Atom, The Man Who Ran the Moon, Starman, and The Making of Stanley Kubrick’s 2001: A Space Odyssey.

M/M (Paris) is an art and design partnership consisting of Mathias Augustyniak and Michael Amzalag. Their portfolio includes art direction and collaborations with Björk, Balenciaga, and Inez van Lamsweerde & Vinoodh Matadin, as well as with magazines including Vogue Paris, Interview, and Purple Fashion. 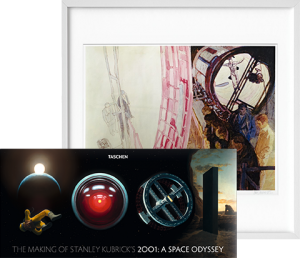