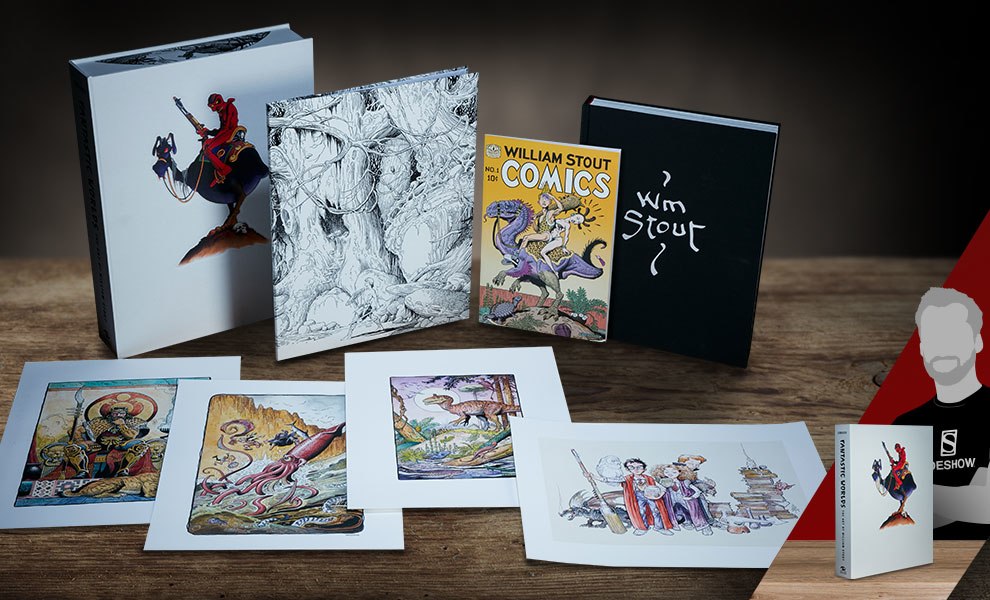 10% off with code REWIND 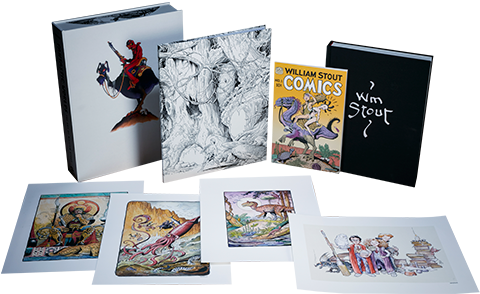 From his cult movie posters to his epic paleoart, celebrate the life and work of William Stout with this stunning limited edition monograph featuring the most iconic imagery, exclusive prints, and a signed and numbered signature card from the multitalented muralist, illustrator, and designer.

Muralist, illustrator, comics artist, poster designer—William Stout has created a body of work that transcends genre, medium, and industry during his astonishing forty-year career. He has designed album covers for the Who and the Rolling Stones, worked on films ranging from Ralph Bakshi’s Wizards to Guillermo del Toro’s Pan’s Labyrinth, and brought the world of the dinosaurs to life through highly acclaimed paleoart.

Now Stout fans can relive the life and career of their favorite artist with this breathtaking limited edition monograph, which features a special clamshell cover, exclusive prints, and a signed and numbered signature card. Curated by the artist himself, Fantastic Worlds: The Art of William Stout bursts with the most iconic imagery in Stout’s oeuvre. From his student years to his robust career as a painter, illustrator, and more, Fantastic Worlds is the ultimate Stout retrospective—the perfect way for fans to commemorate the extraordinary work of a one-of-a-kind artist.

William Stout is one of America’s foremost fantasy and film artists and illustrators. Stout’s paleontological art has been shown at the Smithsonian Institute and the British Museum. His dinosaur illustrations appeared in The Little Blue Brontosaurus, which formed the basis of the enormously popular The Land Before Time animated series. Stout has contributed to over thirty films, including Raiders of the Lost Ark, Jurassic Park, Men in Black, and Walt Disney’s Dinosaur. He was a designer for Guillermo del Toro’s Pan’s Labyrinth. His previous books include The Little Blue Brontosaurus, The New Dinosaurs, Prehistoric Life Murals, and Dinosaur Discoveries.

Ed Leimbacher, Author: Ed Leimbacher had a twenty-year career as a journalist, rock critic, creative producer, and copywriter. He also spent twenty-five years as a books-and-records seller in Seattle. His work has appeared in publications such as Rolling Stone, Fusion, and Ramparts.

Robert Williams, Introduction: Robert Williams brought the term “lowbrow” into the fine arts lexicon, with his groundbreaking 1979 book, The Lowbrow Art of Robt. Williams. Williams pursued a career as a fine arts painter years before joining the art studio of Ed “Big Daddy” Roth in the mid-1960’s. In this role as the famous custom car builder’s art director, he moved into the rebellious, anti-war circles of early underground comix. 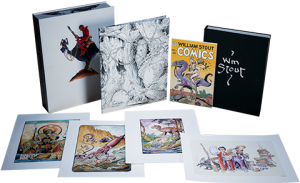