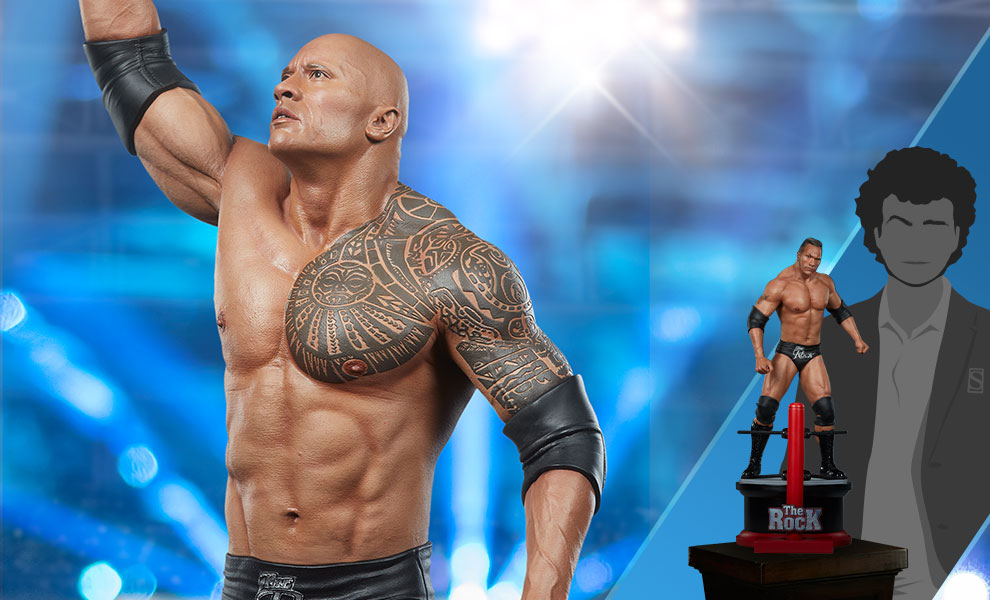 “If you smell what The Rock is cookin’…”

Sideshow and PCS Collectibles present The Rock 1:4 Scale Statue, ready to "Lay the SmackDown" on your WWE collectibles. The Rock Statue is fully sculpted and features two unique torsos that capture iconic looks from across The Rock’s extensive WWE career.

The classic version of The Rock measures 24” tall as the People’s Champion flexes his muscles in an intimidating stance. His portrait has been painstakingly sculpted to embody his iconic people’s eyebrow expression as he gazes out at the crowds. His arms have sculpted elbow pads and his right bicep also features the Brahma Bull tattoo, with the bull graphic on the back of his black trunks.

The modern version of The Rock measures 28.5” tall, as he pumps his fist victoriously over his head, looking out from the ring with intensity. In addition to elbow pads and the bull on his right arm, The Rock’s left arm features an intricately detailed tribal tattoo.

The Rock Statue also has knee pads, and glossy black boots, completing his look. The statue has a circular podium base with a red post that features his name logo front and center. Attached to the post are sculpted turnbuckles and ropes that the statue stands on, creating the full immersive look of a WWE ring. It doesn’t matter which way you choose to display him- this is the ultimate collectible for The Rock fans.

Know your role and get your WWE collection cookin’ by bringing home The Rock 1:4 Scale Statue from PCS Collectibles today!

Great statue of the rock, I love the fact they gave you the option to pose him as the young Rock or the old Rock. They both look great. This why I must purchase now the Undertaker and Stone Cold Steve Austin statues.

This really is a top notch statue and much better quality than Ultimate Warrior. Swap out torso! Not just the head gives it a totally different look from two different era. Quality product. Highly recommend!