Destro will crush all opponents for the highest bidder!

Hailing from a long line of savvy war profiteers, we are proud to introduce the next adversary in our G.I. Joe Sixth Scale Collection, the Destro – Weapons Supplier Sixth Scale Figure! 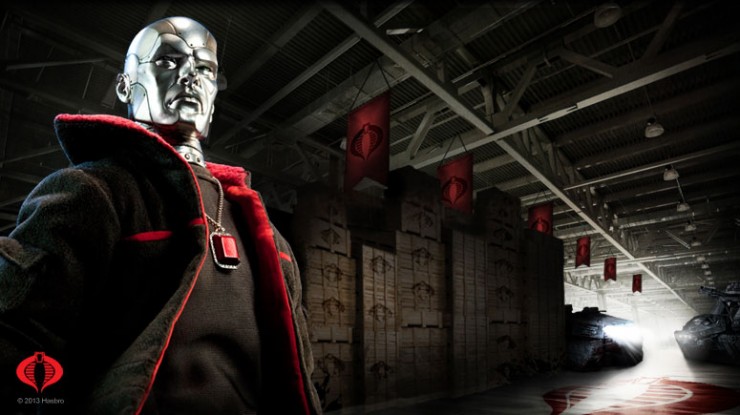 “I see no shame in my profession”

As a fascinating foil to the megalomaniac Cobra Commander, behind the beryllium steel mask lies a shrewd arms dealer who walks the line between evil-doer and man of integrity. Regardless of his true agenda, Destro aids the COBRA terrorist organization in many of its missions in world domination, with the lovely Baroness at his side.

We have outfitted Laird Destro in a hand-tailored costume, complete with vest and long jacket for warmth in the Scottish Highlands, and around his neck hangs the remarkable McCullen ruby medallion, a treasured family heirloom.

The head of M.A.R.S. Industries comes aptly equipped with an array of deadly, technologically advanced gear and accessories, including COBRA weapon blueprints and a satellite location tracking device.

Always prepared for dangerous situations, Destro keeps a chrome pistol harnessed at his side, and a laser pistol concealed behind a secret panel in his communications case. His arm gauntlets house both miniature wrist rockets and hand grenades, signature examples of his cutting edge technology that pack enough punch to knock out a combat helicopter.

The Exclusive Destro Sixth Scale Figure will include an alternative swap-out head, for a more realistic interpretation of ‘the man in the iron mask’ (shown above left).

The Exclusive and regular versions of the Destro Sixth Scale Figure are priced at $179.99, with payment plans available for as low as $60.00/month.

Year of the Snake

Yo Joes! Celebrate 2013, ‘The Year of the Snake’ by pairing Destro with this special display item, a raised COBRA logo base with newly engineered pivoting support post and secret compartment for stowing valuable accessories. (Base sold separately) The Cobra Sixth Scale Figure Stand is priced at $14.99.