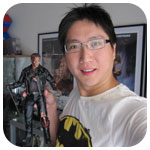 Started Collecting:      I started back into collecting in late 2011, and haven’t stopped since!

As a kid growing up in the 80s, I was lucky enough to have parents and grandparents that spoiled me with plenty of toys, including Masters of the Universe, Centurions, Voltron, Thundercats, and one of my favourites – Transformers!

As an adult, I started collecting in late 2011 with the 3.75″ Star Wars Vintage Collection figures. But this quickly branched out into Sixth Scale figures from Sideshow and Hot Toys, and I haven’t slowed down since!

Saruman is coming, we have seen it...