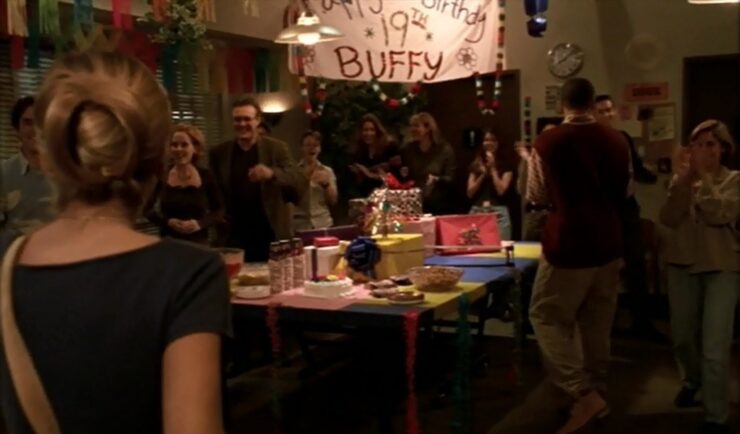 While her television series might be turning 25 this year, the Chosen One herself is turning 41 on January 19, 2022 (thanks to a canonical birthday of January 19, 1981). Buffy Anne Summers has been slaying on screen and in the comics for a long time now, but her words of wisdom are always fresh. You don’t come back from death twice without learning a thing or two about perseverance.

She was sharing her power long before Willow used the scythe to activate all potential Slayers, through leadership and motivational speeches (yummy sushi pajamas notwithstanding). So, in honor of Buffy’s big day, here are 10 of the best Buffy the Vampire Slayer quotes for Chosen Ones, Slayers, and anyone looking for an extra bit of confidence when facing the forces of darkness.

When you’re the Slayer, you kind of hope there’s going to be evil things for you to slay. While Buffy did admittedly need some nights off (she had a social life, duh), she took the responsibility of her destiny pretty seriously. And no luck was needed! All her training and practice paid off as she dispatched vampires with ease night after night.

So, when you just want to do the work and get the job done, wish yourself some monsters! 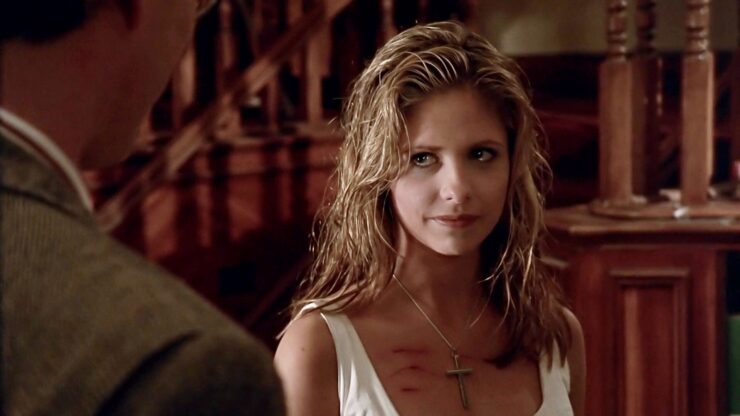 Who among us hasn’t felt dead inside after a particularly rough day? But, hey — at least you can still look in the mirror, unlike bumpy, fang-faced vampires! After Buffy’s first actual death, her friends revived her to face the elder vampire called the Master and protect the world from the Hellmouth opening full time. The Master was old and wrinkled, with fruit punch mouth to boot. Buffy might have drowned in her prom dress, but she still looked fabulous staking her foe to dust on top of the high school library.

There’s no rule saying you can’t love yourself even after a rough go of it. We can’t always say the same for those vampires whose sense of fashion seemed to die with them, though.

Now, even though Buffy had super powers, this quote isn’t only about physical strength and kicking butt. There are lots of ways to fight and take a stand for what you believe in — just ask the Scoobies who stood alongside her. It’s the act of trying and working hard to change the world that makes all the difference. Being strong isn’t just being able to bench a semi-truck or withstand a punch to the face. It’s getting back up after being knocked down and always moving forward.

Remember this one the next time you need a little extra motivation to take a stand and face down impossible odds.

“I’m cookie dough. I’m not done baking. I’m not finished becoming whoever the hell it is I’m gonna turn out to be.”

A delicious, memorable metaphor from the series finale! Buffy’s cookie dough speech embodies her perfectly — it’s silly, sweet, and makes sense in its own odd way. It gets the point across and is especially important for someone like a Slayer who seems to have a fixed destiny. Prophecy girl or not, Buffy isn’t finished growing and learning yet. This attitude of humility and self-awareness sets her apart from other Slayers who walked their paths alone, their lives dictated by the ancient magic that made them into killing machines.

Maybe you’re oatmeal raisin, or chocolate chip, or sugar dough. There will come a time when you’re ready and you will be cookies! But don’t rush the process, follow the recipe and be patient.

“Make your choice. Are you ready to be strong?” 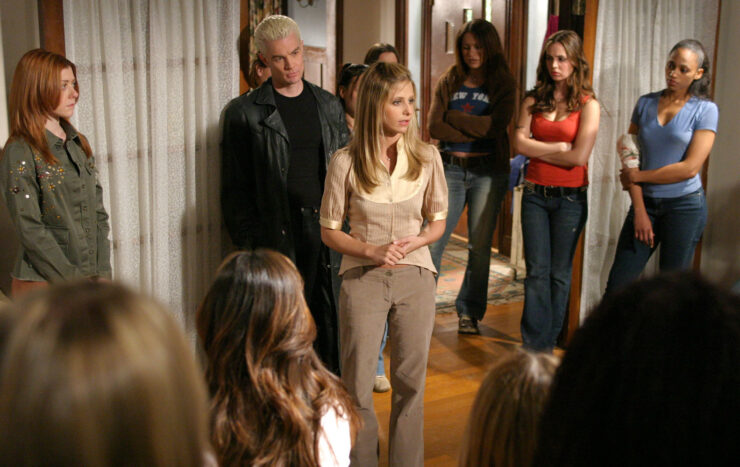 In season 7, Buffy decided to do something radical — take the power of the Slayer and share it with everyone who could be a Slayer. Usually, potential Slayers would only have the chance to gain mystic strength when the previous heroine died, and even then, some trained their whole lives and would never be “activated” as the Chosen One. This was thanks to an outdated, rather patriarchal system that mostly kept the Slayers under subjugation. But Buffy (and Willow!) blew the gates wide open and reached out a hand to everyone who could wield that power for themselves.

Being a Slayer wasn’t something anyone signed up for, and so Buffy gave them the choice — to stand and fight, or to ignore their duty. It’s hard to encounter age old struggles that were started in generations past. It can even feel unfair at times, but we have the choice to make a difference.

“I’m the thing that monsters have nightmares about.”

When feel-good, emotional catchphrases aren’t enough for you, intimidation is always another powerful motivator. Buffy was an agent for good so powerful that even just the mention of “Slayer” frightened evildoers. They knew a hero was coming. While sometimes monsters frighten other monsters, Buffy never let herself fall to darkness, even when a few of her friends (like Anya and Willow) had their own brushes with evil.

Be a force for good so powerful that even vampires and demons would check under their bed to make sure you’re not lurking in the dark! This also gives you the extra assurance you probably won’t have any undead creepies knocking on your door any time soon.

“The hardest thing to do in this world is to live in it. Be brave. Live.” 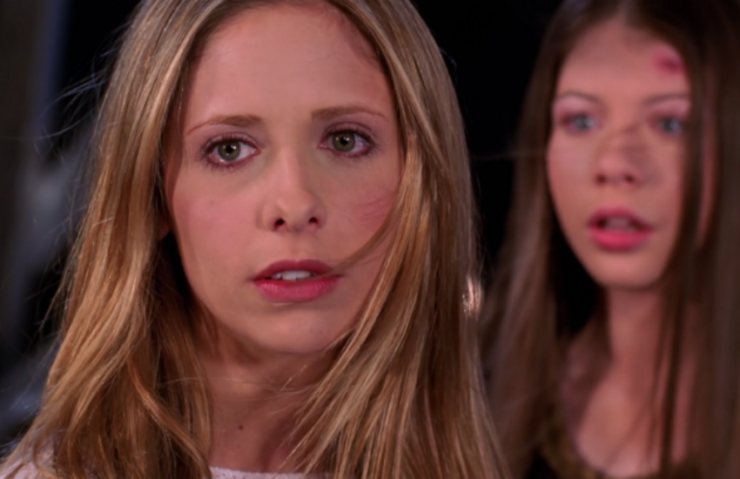 From the season 5 finale “The Gift,” this quote is the ultimate tearjerker, but also makes a good reminder that sometimes living your life day to day is the biggest act of courage. It doesn’t take a massive personal sacrifice to save reality from a hell god to show you are resilient and brave. When Buffy begged her sister Dawn, who had been revealed as a mystical energy construct whose own memories to that point were artificial, to be brave and live, it was a plea to experience the world to the fullest (the very world Buffy was about to save). She asked her sister to carry on in the face of tragedy, but without the fear of an apocalypse ending life as everyone knew it.

Some days, it can feel like getting up in the morning is the biggest challenge. This quote serves as a reminder to make something of our lives, but also to be kind to ourselves. You don’t have to be a Chosen One to show your courage in this sometimes frightening world.

“There is only one thing on this Earth more powerful than evil, and that’s us.”

While it’s said that the Slayer often walks her path alone, the series showed that Buffy was more powerful standing alongside her friends. Throw potential Slayers in the mix, and you’ve got a strong community of young heroes ready to fight back against the darkness. There’s a reason many Slayers fell in the line of duty before they got to Buffy, and even Buffy would have stayed dead if it weren’t for her friends.

Though the First Evil was a mythical personification of all the badness in the world, there are a lot of other evils in the world that we can choose to face. But, like Buffy said, it is only together that we can triumph. So whether you’re a Slayer, a witch, or just someone who really wants to make a difference, stand strong. You’re not alone.

A fan-favorite moment from the season 2 finale “Becoming,” this quote was the core of Buffy’s life as a Slayer. From the start, our favorite blonde heroine was different than the Slayers who preceded her. She had friends, resources, a loving mother, a caring Watcher, and a life beyond stalking the undead. But by the end of season 2, things were looking bleak when Angelus (her beau-turned-baddie) cut her off from help and isolated her at sword-point. He asked what she had without the weapons, friends, and hope, all while forgetting the most important part: Buffy always had herself. And she was more than enough to kick butt, save the world, and stand up for herself.

If you need to catch the blade of a sword (physical or metaphorical) being thrown at you, remember that you are enough. You are strong, and have intrinsic value beyond just the external things in your life. 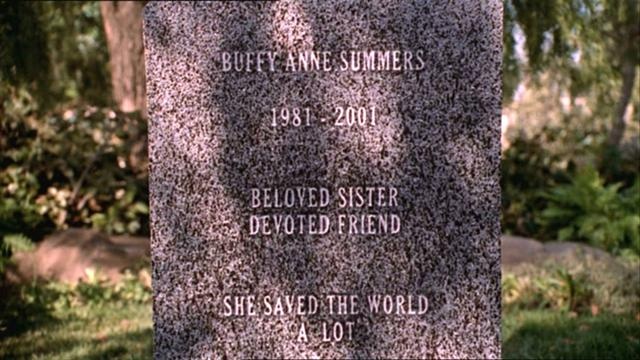 These weren’t her own words, but the words that were spoken about Buffy by the people who loved her most make the biggest impact. After sacrificing herself not only to save her sister Dawn but also all of reality, the Slayer was laid to rest in a hidden grave to protect and preserve her memory. The words chosen to commemorate her are few, simple, and effective.

The Scoobies were always quite quippy, yet there is nothing silly or snappy about this epitaph. It’s heartfelt and heartbreaking, and remembers Buffy for more than just being the Slayer. It shows that in the end, we’ll all be remembered by the ones closest to us and for the good we put into the world.

When you want to slay the Buffy way, remember these words of wisdom! Their value is much more than any old Watchers Council book could provide. In the meantime, let’s raise a toast to the Chosen One. Happy birthday, Buffy — there’s a party at The Bronze and everyone is all invited! (Except if you’re a vampire. Never invite vampires inside.)

What other quotes from Buffy or the Scoobies make good motivation for tough situations? Let Your Geek Sideshow and tell us in the comments.

Pop Culture Headlines - The Lord of the Rings Series Name