With breathtaking lands, extensive lore, and a timeless tale of good triumphing over evil, The Lord of the Rings is a triumphant feat in fantasy storytelling. While these factors certainly contribute to its enduring popularity, what makes these stories truly timeless are the characters and the fellowship that they share with one another.

Throughout the movie trilogy, these characters demonstrate acts of incredible loyalty and love even in the most harrowing of times. Here are our top ten favorite moments of brotherhood in The Lord of the Rings.

Even with significant differences in personality, Boromir and Faramir have an undeniably strong bond as brothers and soldiers of Gondor. Boromir has reclaimed Osgiliath for Gondor, and the two brothers celebrate with their fellow Gondorian soldiers. Their joy, however, is interrupted by their father, Denethor. Denethor takes the opportunity to praise Boromir and belittle Faramir. Boromir chastises his father for his behavior. The celebration is cut entirely short when Denethor charges Boromir with going to Rivendell for a secret council.

When Faramir offers to go in his stead, Denethor insists that it must be Boromir. These moments are the last memories Faramir has of his brother. As Boromir departs for Rivendell, he tells Faramir, “Remember today, little brother,” somberly echoing the words he had shared in celebration following their victory. Despite sharing very little screen time in the form of a flashback, the history and love the brothers share is palpable.

Gandalf spends much of the trilogy viewing Pippin as a “fool of a Took,” an admonishment that is well-earned by the young Hobbit. Their relationship grows, however, to be one grounded in mutual respect. Gondor is under siege and Pippin wanders into the fray. He witnesses Gandalf fending off the hordes of Mordor on the walls of Minas Tirith. Gandalf urges Pippin to fall back to safety as he deftly fights off the attacking Orcs.

Despite his age and battle prowess, Gandalf neglects to notice an Orc charging behind him. Sword in hand, Pippin leaps between the attacking Orc and the White Wizard. Gandalf recognizes that Pippin just saved his life, and tells him, “Guard of the Citadel, indeed.” The ability for the two unlikely comrades to count on one another in the most challenging moments in the battle for Minas Tirith allows them to forge a remarkable friendship that continues until the very end.

8. “Gandalf my old friend, this will be a night to remember!”

Gandalf and Bilbo’s friendship goes back to events predating even The Hobbit. Gandalf knew Bilbo as a young boy and hand-picked him to be the burglar in Thorin’s company. With a long history and great fondness for one another, it is no surprise that Gandalf visited the Shire for Bilbo’s eleventy-first birthday. The longtime companions sit outside Bag End, smoking Old Toby from their pipes. Bilbo blows a smoke ring, and with a bit of magic, Gandalf blows an elegant ship that sails through Bilbo’s smoke ring.

Smiling, Bilbo tells the wizard, “Gandalf, my old friend, this will be a night to remember!” The two friends are parted for some time during the Fellowship’s journey and are reunited forever when they eventually cross the sea into the Undying Lands as the Fourth Age of Middle-earth dawns. With their rich shared history and love of both comfort and adventure, the close friendship they share is no surprise.

Sharing a history of being underestimated, Éowyn and Merry form a close bond with one another. As a woman and Hobbit respectively, they both are told that they will not be allowed to charge into battle with the men of Rohan. Merry is devastated when Théoden kindly tells him that he can come no further. As the soldiers mount their horses and begin their journey to Minas Tirith, Merry is swept from the ground by a soldier riding by. “Ride with me,” the soldier says, revealing herself to be Éowyn disguised as a man. “My lady!” he exclaims, as they join the other soldiers in fighting for the people and homes that they love.

With their respective courage and loyalty to one another, they are together able to strike down the Witch-king and grant King Théoden a peaceful, honorable death. If they had not recognized a shared spirit within one another or one had been absent from the Pelennor Fields, there’s no telling how the battle may have turned out.

Best friends from childhood, Merry and Pippin face many perils together when they are swept up into Frodo’s journey. Although they spend a great deal of time together throughout the course of the trilogy, the two are forced to part ways in The Return of the King. Gandalf brings Pippin to Minas Tirith with him as Merry is left behind in Rohan. In their time apart, Pippin pledges his service to Gondor and Merry pledges his service to Rohan. The Hobbits both fight bravely in the battle for Minas Tirith, and both lend a hand in saving people that they care for.

When the battle is over, Pippin searches the battlefield into the night for his closest friend. Finally, Pippin finds an injured Merry. Weakly, Merry says to Pippin, “I knew you’d find me. Are you going to leave me?” Pippin tells him, “No, Merry. I’m going to look after you,” as he lovingly pulls a blanket over him. Pippin never gave up looking for his beloved friend, and Merry never lost faith that Pippin would find him in the end.

5. “I would have followed you, my brother, my captain, my King.”

The relationship between Aragorn and Boromir was tense from its inception. As the long-lost heir to the throne of Gondor, Aragorn presented a threat to Boromir as the Steward’s son. Beyond this, Aragorn and Boromir disagree about how the Ring should be used; Aragorn recognizes that it should be destroyed, while Boromir is often adamant that it should be used as a weapon against Sauron. Boromir nearly takes the Ring from Frodo but ultimately redeems himself by giving his life to defend Merry and Pippin.

Aragorn rescues Boromir from a gruesome death at the hands of the Uruk-hai Lurtz, but is unable to save his life. The two men come to an understanding as Aragorn tells Boromir that he will not “let the White City fall, nor our people fail.” As Boromir dies, he tells Aragorn, “I would have followed you, my brother, my captain, my King.” In a final act of respect and love, Aragorn kisses Boromir’s forehead, and goes on to wear his vambraces for the duration of his journey throughout the trilogy.

They give each other an invaluable gift in the end; Boromir shows Aragorn that there is goodness to be found in the race of Men, and Aragorn grants Boromir the ability to have a peaceful, honorable death with a friend at his side.

One of the most enduring and beautiful friendships in the entire trilogy is the one between Frodo Baggins and Samwise Gamgee. With the Fellowship crumbling and Saruman’s Uruk-hai attacking the Fellowship at Amon Hen, Frodo makes a break for the shores of the River Anduin. As he rows to the eastern shore to begin his solo trek to Mordor, Sam emerges from the woods and follows Frodo’s boat into the water. Frodo urges him to go back, telling him that he is going to Mordor alone. Sam replies, “Of course you are. And I’m coming with you!”

However, Sam, who cannot swim, begins to drown. Frodo pulls him out of the water and into his boat. A tearful Sam tells Frodo, “I made a promise, Mr. Frodo … a promise. ‘Don’t you leave him, Samwise Gamgee.’ And I don’t mean to … I don’t mean to.” The two Hobbits tearfully embrace and begin their journey to Mordor together.

Of all the relationships in the Fellowship, none is more contentious than that between Legolas and Gimli. As an Elf and a Dwarf respectively, their relationship is fraught with bad blood due to longstanding anger between their people. As their journey continues, the two form a begrudging alliance that turns into respectful competitiveness that eventually evolves into a loving friendship.

As they are surrounded by the forces of Mordor at the Black Gate, Gimli reflects on their likely demise, telling Legolas, “Never thought I’d die fighting side by side with an Elf.” Smiling down at the Dwarf, Legolas replies, “What about side by side with a friend?” Smiling, Gimli says, “Aye, I could do that.” Of all of the relationships in The Lord of the Rings, theirs undeniably goes through the most growth.

When the newly crowned Aragorn and Arwen approach the four Hobbits, they bow to the King of Gondor. Looking at the Hobbits demonstrating this sign of respect, Aragorn tells them, “My friends, you bow to no one.” Aragorn kneels before the Hobbits, and the rest of Minas Tirith follows suit. This act of loving admiration beautifully encapsulates the depth of the relationship between the Hobbits and Aragorn, resulting in one of the most sentimental moments in the entire trilogy. 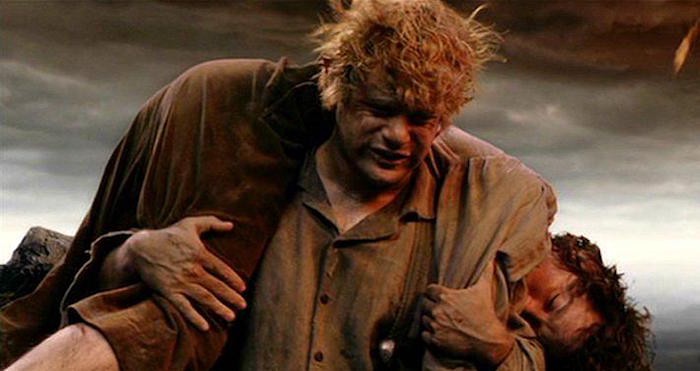 As arguably the strongest friendship in The Lord of the Rings, it is only fair that Frodo and Sam feature on this list twice and at the very top. The end of the journey is in sight when Frodo and Sam collapse in the dirt on Mount Doom. Sam holds Frodo in his arms, surveying the distance between them and completing their mission. Sam speaks of the Shire to Frodo, who tells him that he can’t remember any of it.

Gathering the last vestige of his strength, Sam tells Frodo, “Then let us be rid of it, once and for all. Come on, Mr. Frodo. I can’t carry it for you, but I can carry you.” Hoisting Frodo onto his shoulders, Sam carries his beloved friend up the steep slopes of Mount Doom. Beyond saving one another repeatedly, the sincere, pure, abiding love that the two Hobbits share for one another was perhaps the most integral part in the destruction of the Ring and Middle-earth being saved.

In the end, Frodo destroys the Ring. Aragorn becomes King. Gandalf achieves his purpose in Middle-earth. Every character in The Lord of the Rings has their own journey, and every individual journey is extraordinary. But none of the heroics or glory would have been possible without each main character relying on their friends. Even more than good triumphing over evil, The Lord of the Rings is a story about love and brotherhood prevailing over everything.

Which LOTR friendship is your favorite, and why? Let us know in the comments and don’t forget to Let Your Geek Sideshow!