Ted Lasso took Apple TV+ by storm with its relentlessly optimistic charm, Midwestern-laden wisdom, and nuanced performances. While season 1 explored the lighter side of titular lead Ted Lasso’s infectious positivity, season 2 mined the darker depths and the underlying pain of that positivity. The show also tackles mental health in the world of sports — a topic seldom explored in the media (Dani Rojas’ case of the “yips” feels especially prescient given Simone Biles’ struggle with the “twisties” during the Olympics).

As we wait impatiently for the third season to arrive, let’s dive into the 10 most impactful moments on Ted Lasso, a series that never flinches while stumbling through the “dark forest” act of its fairytale.

Rebecca’s father passes away, and she must deliver the eulogy at his funeral. The problem? Rebecca grapples with her complicated feelings toward him, made significantly more complex after death. She freezes while standing before the crowd and begins singing “Never Gonna Give You Up” by Rick Astley to fill the silence.

Rebecca falters on the chorus, overcome with emotion, but her pal Ted joins in to provide support. Soon, the whole church sings in tandem. It’s such a tender, touching moment on Ted Lasso and a stark reminder that our inner circle elevates us in our darkest hours.

Keeley and Roy in the locker room after Roy’s last match (1.10)

Resident lovable curmudgeon Roy Kent struggles to reconcile with his age as his retirement from football becomes a certainty. After injuring himself in the season’s final game, Roy limps off the field, his last time doing so as a player. Keeley offers her support while Roy realizes he can no longer play the game as he could at 20 years old. It’s tough coming to terms with your mortality.

Initially, Roy rebuffs Keeley, but she refuses to leave him alone. Finally, Roy allows Keeley to be his rock, and it’s a lovely moment. It’s rare to see a woman cradle a man on TV, to be his shoulder on which to cry, so, as a woman myself, this was nice to see. 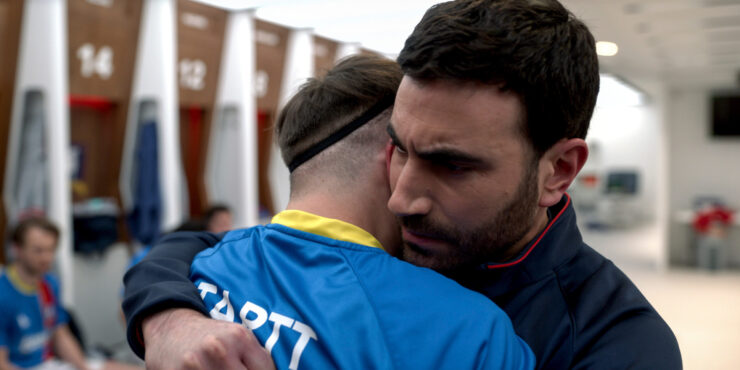 Jamie struggles with toxic masculinity for most of the series thus far, but by the middle of season 2, he starts to evolve for the better. Jamie briefly skirmishes with his abusive father and after Coach Beard gives the older Tartt the boot, every suppressed emotion bubbles to the surface. That’s when Roy, without hesitation, strides across the room to hug his former rival.

Ted Lasso refreshingly tosses toxic masculinity out of the window, and Jamie and Roy’s embrace proves that. I’d be lying if I said my eyes were dry during this scene. Not only does it mark a turning point in Jamie and Roy’s relationship, but it puts Jamie on the path to self-love and healing.

Rebecca sings “Let It Go” at karaoke, wowing viewers with her incredible voice. But, amid all that, Ted experiences a full-blown panic attack, his first one on the show. The lyrics juxtaposed with Ted’s emotional and mental state make for a powerful and poignant scene. Rebecca comforts him after her song, and it closely mirrors that moment in “For the Children” when Ted provides support for her. This act depicts the beginning of Rebecca’s conversion to Team Lasso, and, eventually, she abandons her mission to drive AFC Richmond into the ground.

Ted Lasso deftly dives into men’s mental health, an arena that can be hard to navigate. Though the show toes the line with the established Black lady therapist trope, it also targets a demographic that’s seldom transparent about mental health and therapy: middle-aged Midwestern men.

“Carol of the Bells” might be polarizing among Ted Lasso fans for not advancing the plot and acting as a self-contained episode, but I’m always game for a good festive outing. Anyway, “Carol of the Bells” aptly epitomizes the warmth and cheer that we can only get from this show.

Higgins delivers a heartwarming speech at his Christmas gathering, with most of the AFC Richmond team and his family in attendance. He expresses one of the themes of Ted Lasso: the power of love, and extending that love to whoever needs it because, let’s face it, we’re all hurting. This speech also touches on the power of choosing your family — something often celebrated in the series.

Ted Lasso champions accountability and responsibility — two vital parts of inner growth. Rebecca comes clean to Ted in “All Apologies,” revealing how she tried to foil his first run as a football coach every step of the way. After her confession, Rebecca expects Ted to tender his resignation. She braces herself for Ted’s inevitable (and understandable) anger.

However, Ted shakes Rebecca’s hand and forgives her. She embraces him, and Ted dispenses this nugget of wisdom:

If you care about someone, and you got a little love in your heart, there ain’t nothing you can’t get through together.

Everyone on this show perseveres, and, as Dory would say, they “just keep swimming.” Like a goldfish! 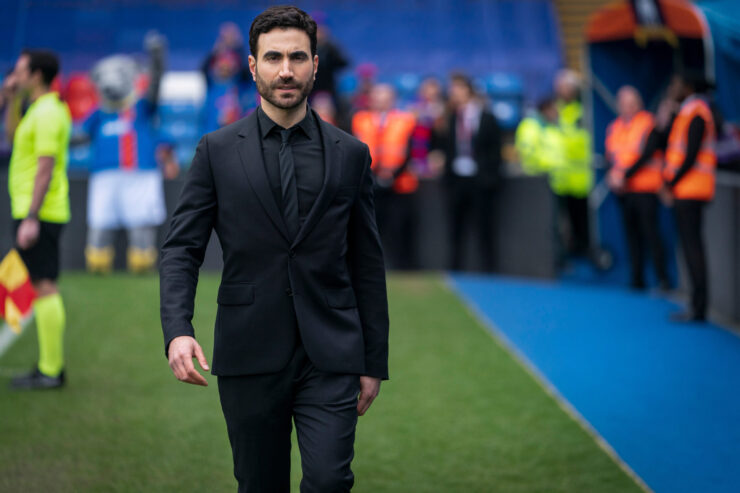 We know Ted supports “Rom-communism,” the steadfast belief that everything will work out in the end. But first, you must get through the dark forest. In the episode “Rainbow,” rom-com Easter eggs abound; however, my favorite of the bunch is Roy’s “rom-com” dash to Nelson Road Stadium. Of course, like any rom-com worth its salt, there’s conflict before the confession of love between potential mates.

Roy encounters obstacle after obstacle while en route to Nelson Road to accept Ted’s coaching offer. When he finally makes it to the pitch, Ted refers to Roy as “Coach,” to which Roy responds, “You had me at ‘Coach.'” It’s the personification of happiness and dazzling rainbows. 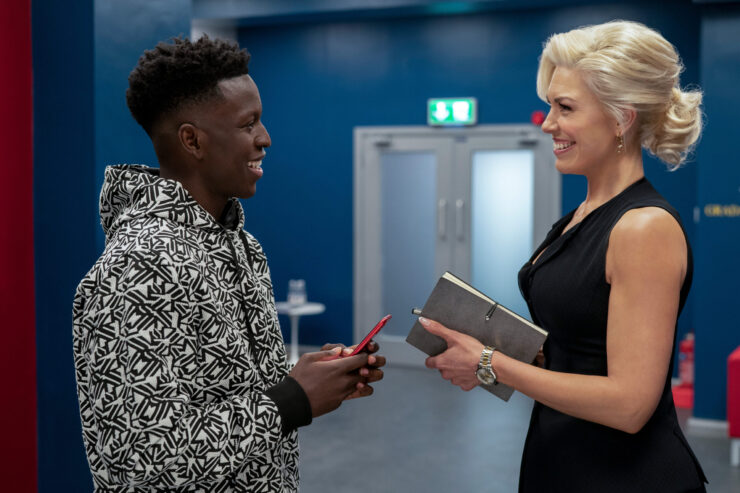 Season 2 finds Rebecca on a mission to discover love and, after a few unfulfilling flings, she starts chatting with a mysterious someone on Bantr, a dating app with no photos. She connects with this enigmatic man. Ted Lasso masterfully makes us believe Rebecca’s messaging Ted but, in “The Signal,” we see she’s talking to Sam. Of course, while the show hints at Rebecca and Ted, it does show Sam chatting with someone on Bantr.

It’s a potent plot twist that impacts the rest of Rebecca and Sam’s respective season 2 storylines. Rebecca and Sam embark on a friends-with-benefits journey, keeping their relationship under wraps. Sam wishes to tell everyone at Richmond about them, but Rebecca struggles with what she wants. Eventually, they break things off so that Rebecca can do some much-needed self-reflection. Sam is an absolute gentleman through it all, and I hope they find their way back to each other.

“No Weddings and a Funeral” showcases a handful of impactful moments for Ted Lasso. The series never shies away from illustrating the connections between Ted and Rebecca, primarily through imagery. This time, we see Rebecca and Ted recount pivotal events in their lives that unfolded on September 13, 1991. Ted tearfully tells his therapist, Dr. Fieldstone, about his father’s suicide, while Rebecca explains to her mother that she bore witness to her father’s affair.

The show weaves these scenes together seamlessly, proving while Ted and Rebecca might not become romantic partners, they are soulmates on a deeper level. Jason Sudeikis and Hannah Waddingham churn out their show-best performances. Admittedly, I busted out the tissues for this one. 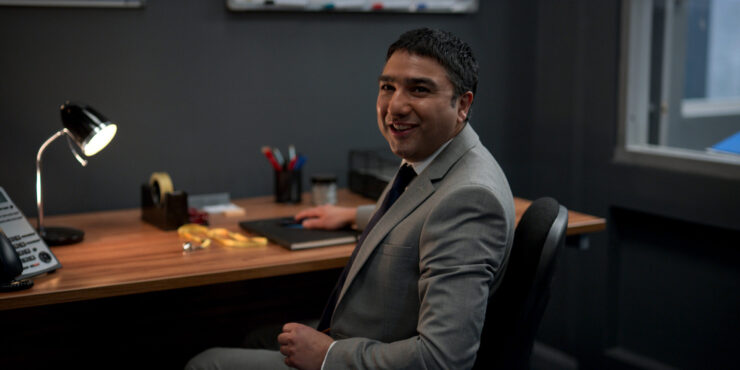 Everyone wants to hate Nate for his transformation from hero to villain, but I never will. Ted Lasso methodically plants the seeds of Nate’s downfall; however, Nick Mohammed does a brilliant job conveying Nate’s inner turmoil and showcasing what leads him to that dark place. I include Nate’s entire season 2 arc as one impactful moment because not only does Mohammed deliver a fantastic performance, but Nate’s downward spiral occurs piece by piece.

Perhaps the most heartbreaking moments happen when Nate spits on his reflection in the mirror. Really, he’s spitting on himself due to self-hatred. Or when Nate confronts Ted about not hanging their picture in his office, which Nate takes personally — of course, Nate doesn’t know Ted keeps that photo next to the one of his son at home. Symbolism! Nate rips the “Believe” sign in half, signifying his feeling of hopelessness, and I believe we’ll see him find hope again soon.

“Tan Lines” brings about the official separation of Ted and Michelle, catalyzing Ted’s mental health journey on the show. While it’s a heartbreaking scene, it also shows us something we rarely see on TV: amicable divorce. It’s nice to see two people separate without unnecessary nastiness — I say this as a child of a tumultuous, vicious, drawn-out divorce. Ted loves Michelle, so he does what’s best for her and lets her go. Of course, this highlights Ted’s refusal to “quit” things, but he learns the valuable lesson that walking away doesn’t always translate to quitting.

What moments do you think are the most impactful on Ted Lasso? Let us know in the comments and don’t forget to Let Your Geek Sideshow!