If the sci-fi genre has taught us anything, it’s that not all extraterrestrials come in peace, so it’s important to have an arsenal equipped with the galaxy’s greatest weapons just in case the little green men ever decide to crash-land without invitation.

Whether it’s a phaser that can be set to stun or a ray gun that will instantly zap an opponent, reality-warping weapons have been a recurring feature throughout sci-fi movies, invading every scene with high-octane action and pulse-pounding peril.

In this article, we have selected 10 of the most memorable fictional weapons in sci-fi movies, wielded by characters for their destructive capabilities and protection purposes. Pew! Pew! 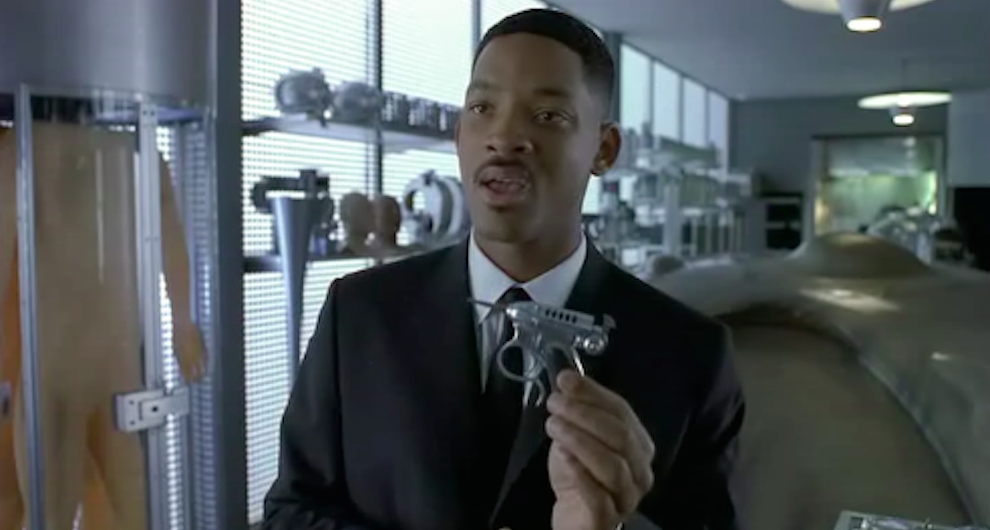 You know what they say: Good things come in small packages. Nothing could be truer of the Noisy Cricket introduced in Men in Black. This weapon might appear insignificant but the power of its blast makes it possible to blow a hole through a wall with a single shot.

The palm-sized firearm, wielded by Will Smith’s Agent J, is notorious for expelling enormous amounts of firepower and each push of the tiny trigger produces a kickback that often results in the shooter being catapulted across the room to great comedic effect.

Identity discs are a fundamental piece of equipment in both the original Tron movie and 2010’s Tron: Legacy. The digital discs serve two primary functions in the Game Grid, as they are not only programmed to store information, but also function as a Frisbee-like weapon with a lethal cutting edge.

The glowing discs are typically worn on the upper back to record everything seen, heard, or experienced by the wearer. In battle, though, the discs can be detached to instantly derez an opponent, making this the one device that users don’t want to step into the platform without. 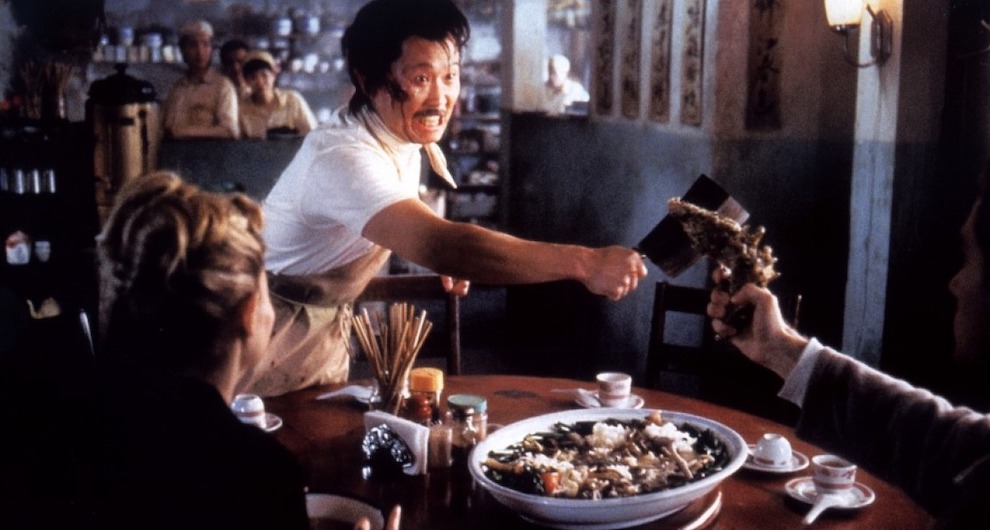 The Gristle Gun is about as gruesome as it sounds. Often referred to as a “Bone Gun”, this bizarre movie weapon is constructed from decayed parts and boney fragments of discarded Chinese food, with actual human teeth loaded into its chambers ready to demolish any potential threats.

This unsettling piece of hardware is easily one of the most indelible images of recent times, but it is also surprisingly effective. Jude Law’s character shoots the trigger twice, letting off a nauseating double crack to take down a knife-wielding waiter in David Cronenberg’s eXistenZ. 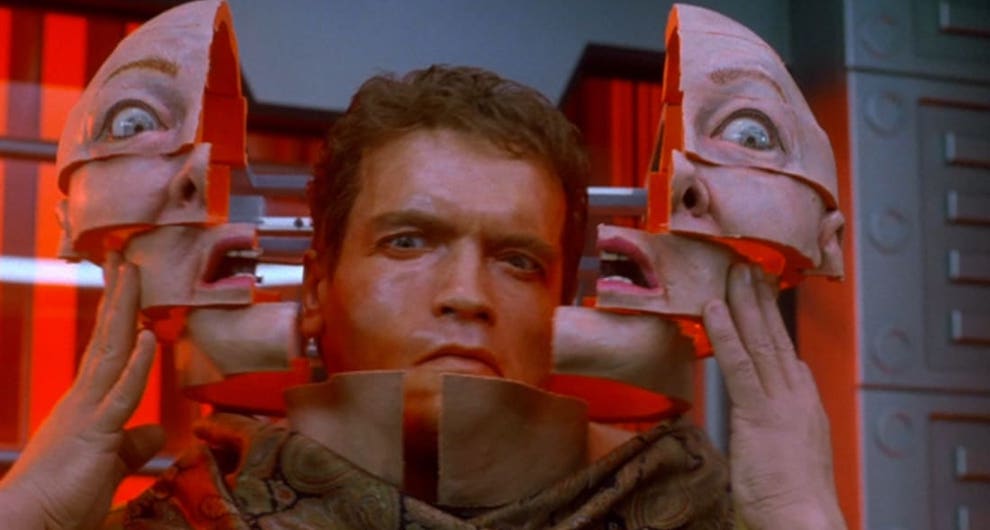 There is no way that we could ever put together a list of the most memorable fictional weapons in movies and not include the “Head Bomb.” The name alone should be enough to tell you why it earned its place in our top ten, but in case you’re in doubt, this weapon literally blows our minds.

Initially, the weapon is concealed beneath a highly realistic robotic mask worn by Arnold Schwarznegger’s Quaid to allow him to sneak past security disguised as a middle-aged, redheaded woman. However, the malfunctioning mask soon reveals itself to be an explosive, offering the character a quick distraction. 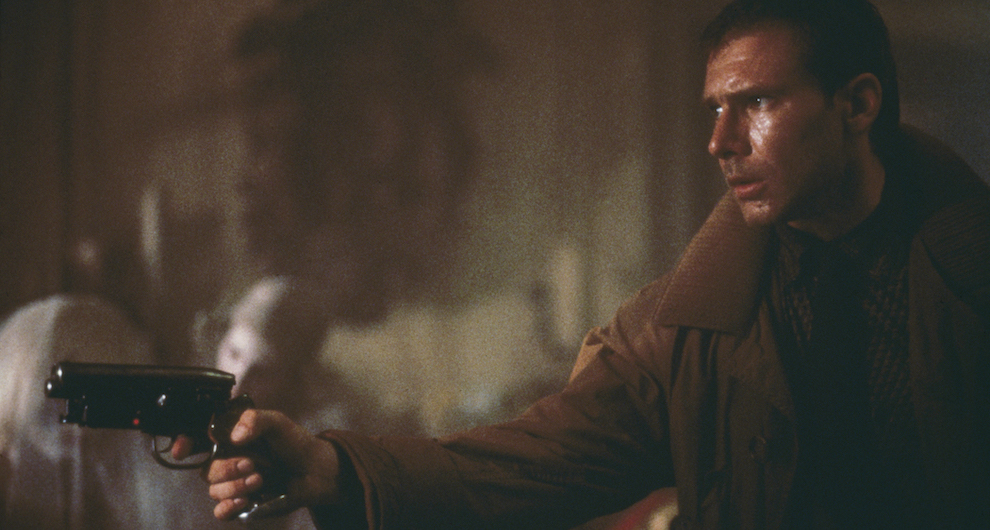 Rick Deckard’s PKD blaster might not have any fancy functions, but this realistic sidearm certainly packs a lethal punch. Importantly, it has all of the range and power that a Blade Runner would need to hunt and “retire” replicants running amok in futuristic Los Angeles.

The weapon is often referred to as “The PKD”, a name reportedly coined by Rick Ross as a subtle nod to author Philip K. Dick, who was best known for his work in science fiction, particularly his 1968 novel Do Androids Dream of Electric Sheep?, which became the literary source of the 1982 film.

Upon activation, Robocop had a few prime directives to obey, such as, “serve the public trust”, “protect the innocent”, “uphold the law”, and one that wasn’t imported into his firmware, but he seemed to execute naturally, “carry a badass gun.”

Robocop is armed with an “Auto 9”, a highly advanced machine pistol capable of blasting holes through just about anything. The weapon is stored in a mechanical holster in Robocop’s right thigh, turning the character into the modern-day equivalent of an Old West gunslinger.

We’d like to introduce you to a close personal friend of ours: the M41A pulse-rifle, which is the standard-issue weapon of the Colonial Marines, otherwise known as the crack team of badass protagonists in James Cameron’s 1986 blockbuster Aliens.

This weapon looks cool, sounds cool and basically defines cool, especially after Sigourney Weaver’s Ripley customizes the rifle to include a built-in M240 Flamethrower, instantly making it one of the most iconic movie weapons ever to blast onto the big screen. 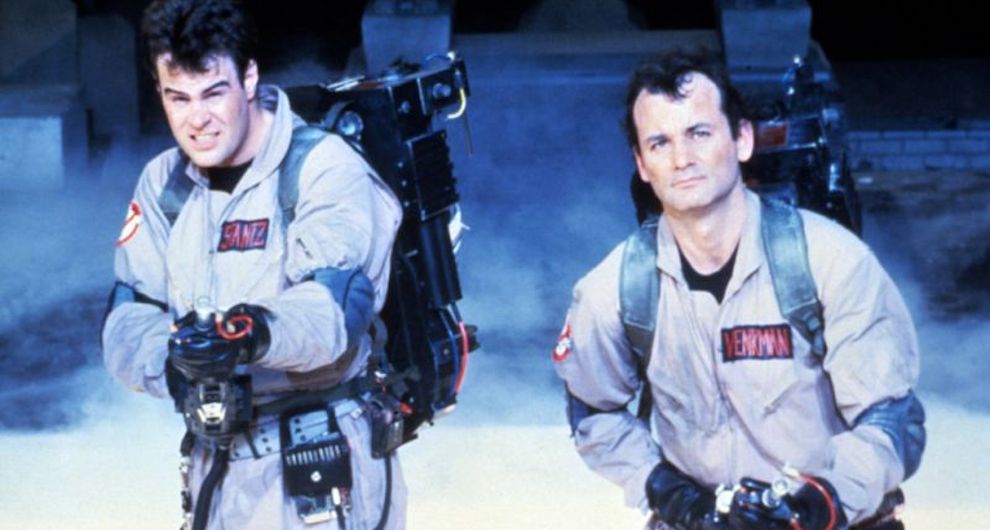 Designed in 1984 by Ghostbusters’ Egon Spengler and Ray Stantz, we suspect the proton pack featured heavily in the make-believe games of 80s kids everywhere, as this nuclear-powered piece of technology has the dual-ability of capturing ghosts and earning those who possess it major cool points.

The proton pack is a highly advanced piece of kit that has one of the coolest designs of all movie weapons. It has a hand-held wand device connected up to the heavy-duty backpack-style accelerator, which function together to weaken and harness the most powerful of spirits, so they ain’t afraid of no ghosts.

Phasers first appeared in the original Star Trek series and became the ultimate must-have accessory in almost all of the subsequent films and television spin-offs since, making this particular weapon from the Starfleet inventory one of the most enduring of all time.

Sometimes small, but never insignificant, the Swiss-army knife of laser pistols has the multi-functional ability to stun, heat, kill, or disintegrate a target, as well as slice through a myriad of solid substances with its adjustable beam of pulsed energy. 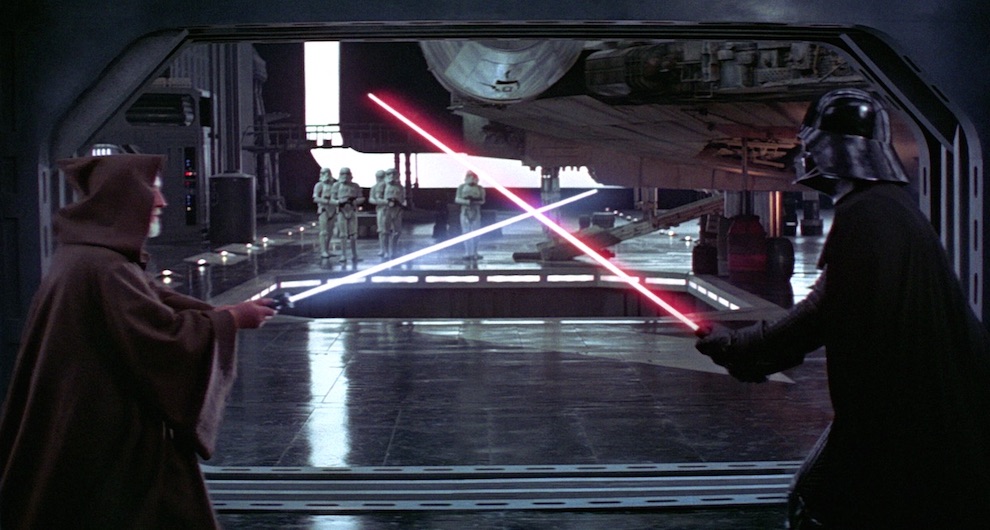 The lightsaber has been lighting up the galaxy since 1977, and still holds a significant place in pop culture today as a universal icon of the sci-fi genre that has inspired generation after generation to take up fencing as an extracurricular activity.

Obi-Wan Kenobi called the lightsaber (sometimes referred to as a laser sword) “an elegant weapon for a more civilized age”, but this blazing blade has caused no end of destruction and dismemberments in the saga’s most memorable battles that are now forever burned into cinematic history.

Did your favorite movie weapon make our list, or do you have any to add to our arsenal? Let Your Geek Sideshow and tell us in the comments!

New Photos of The Mandalorian, HBO Sets Release Date for Watchmen, and more!